Posting a bit late again. Two jobs will do that. The work is long done, but due to doing the work catch as catch can, at my drawing board or on break at work (either job), the work was scattered and it took me a bit to get it together and find time to post. 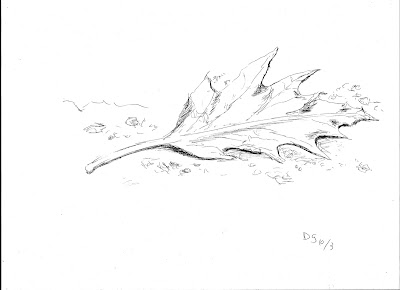 October 3
This was done at break at work, from online photo reference. It's simple ballpoint pen on 20# printer paper. One of my Inktober goals was to push myself stylistically. While I've done nature drawing in the past and have a moderate affinity for it, it's not the first place I think of taking my art. Besides, as backgrounds/environments remain a bit of a shortcoming in my comics, working on this type of art will improve my comics as well.
That's a bit of a sophistry, as working on any art will improve your comics.
October 4 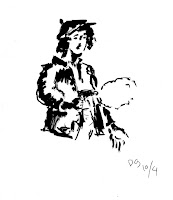 Copying from the masters!
This is a copy from a Hugo Pratt Corto Maltese story.
Materials: previously mentioned ink paper, #6 round flat synthetic brush and India ink.
Pratt's work is so compelling. He can take the simplest line, even a very crude line, and make it ring with the poetry of a desert or of an ocean. Like the best of the so-called simple artists, his work is elusive. As soon as you try to copy it, you begin to realize just how insightful those scrawls can be. 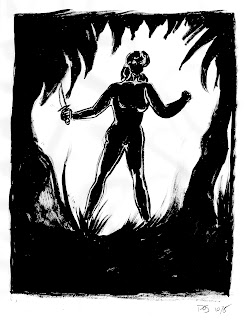 October 5
Done straight from imagination, thinking about Sheena and about the power of really good Tarzan comics. Such variety, ranging from the Jesse Marsh stuff to Joe Kubert to Hogarth!
I'm not convinced this piece is successful, but I look at it as a draft.I went straight to ink, no under-drawing. Started with a quick sketch at work, bought it home and completed.
Materials:
Copy paper, 20#
Ballpoint pen
Sumi-e ink
#6 round/flat brush
#20 flat brush
Brush Faber Castell tip ink marker 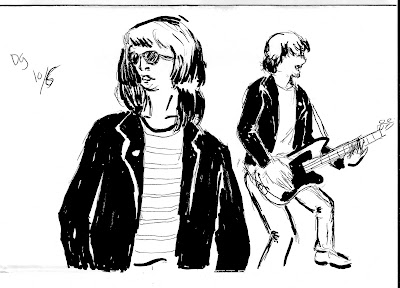 October 6
This one was fun!
Straight copy from the Archie Meets the Ramones one-shot, a comic that's a lot better than it should be. Gisele's art on this one is spot-on. I loved the combination of tight control and rock energy!
Though it is weird, after reading Archie comics for decades, to think of Fred Andrews as a punker....
I did a quick underdrawing on this one, then jumped in.
Materials: Small sketch pad, #4 lead holder, Magic Rub eraser, Sharpie. That's right, Sharpie. As part of this is about control for me, working with crude tools to get specific results is part of the process. 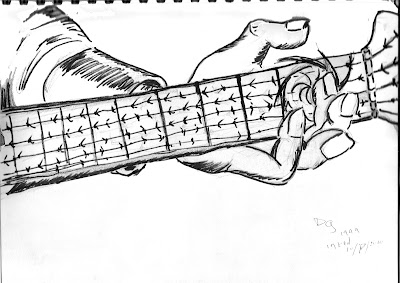 October 7
For this one, I inked an old sketchbook piece.
This was originally done as a proposal for an album cover. A friend of mine was assembling a tribute to the Welsh band Man, and I offered to do some cover art. I took this to pencils, scanned it and sent it off for comments. He had forgotten our conversation and did something completely different!
Ah, well, at least I had the art.
I just inked this up with my reliable Faber Castell brush tip marker. I had some of my usual scanning issues, what with the scanner picking up unwanted gray tones, but for the most part it's successful. I did NOT want this to be a tight mechanical drawing. I wanted the aggression to come through. The guitar strung with barbed wire is a variation on the barbed wire harp that Dali made for Harpo Marx. 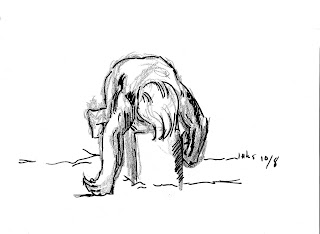 October 8
This was just a sketchbook experiment. The original was done in China marker in a 9 x 12 sketchbook with a rather rough tooth.
I went over it with my reliable Faber Castell brush tip ink marker. That's it.
I honestly don't know if this piece works or not. There was a vibrancy and urgency to the original sketch. I'm not sure it's still there after the inking. I was reluctant to push it too far, and chose to keep the underlying sketch intact behind the inks. 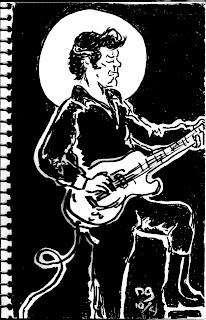 October 9
Okay, this one was fun.
I was watching music videos on Amazon Prime and thinking about the Archie Meets the Ramones comic. I thought about Archie as a badass, and for some reason thought about Harlan Ellison's rock novel Rockabilly (AKA Spider Kiss). This image came to mind.
I did a quick pencil sketch and jumped into the inks.
It's all freehand, folks. Even the spotlight behind him is rough and ragged.
Materials: I have an extensive list of the materials used at home, which I will post later. For right now, it's the standards:
lead holder & Magic Rub eraser
Faber Castell brush tip marker
India ink
various brushes
This may be my favorite of the month. Maybe. 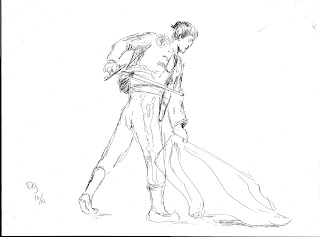 October 10
I was thinking about a couple things on this one. I had noticed a tendency to be more blunt in my recent Inktober pieces. While I like the energy and the confidence that comes from not holding back, I do miss doing detail work at times. As I had been thinking about the bullfight my dad took my mother to on their honeymoon (yes, really), and my dad telling me to read Collins and Lapierre's story of the matador El Cordoba, Or I'll Dress You In Mourning, inspiration struck. On break at work, I did a quick search for matador and found some images from which I assembled this piece. Very simple materials. No pencils, straight to inks with this one! Ballpoint pen on printer paper, that's all!
I have a couple more pieces to locate for the next batch, but should be able to post again soon.