In 1973, an awful TV series came out. It was based on a great idea, and was ruined by unnecessary "creative" input from studio executives.
The series was called The Starlost.
Based on a treatment by Harlan Ellison, the beautiful idea was watered down to nothing.
Watch if you're brave.

The premise: a generational ship is taking representative micorocosms of human cultures to another star. Problem is, they've been in space so long they think their self-contained structures are all there is. To compound the dilemma, the ship is wearing out, and may soon fall into a nearby sun.
Great idea, lousy execution.
Ellison wrote (with co-author Ed Bryant) a novelization of the first teleplay, Phoenix Without Ashes. In the accompanying essay, Ellison details the chaotic world of TV executives, and how their pointless interference caused him to fall back on his screen pseudonym, Cordwainer Bird, in the show's credits. The unfilmed version of the first script won a Writers Guild Award as best teleplay of the year.
This year, IDW released a comic book of it. A four-issue miniseries, to be precise.
It's such great vindication. I hope Ellison (who I've met twice and managed not to offend both times, last time we had a great little chat about the difference between having a good story and telling the story well) feels the same way about it. He sets a high standard for adaptations of his work.
But I think this measures up. It certainly did for me. 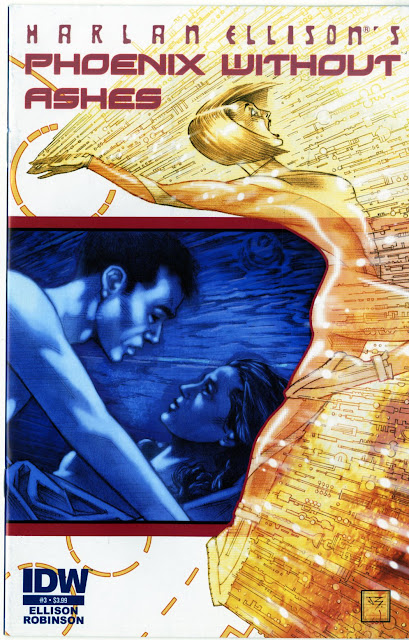 The mini deals with a young man in a harsh Puritanical dome society discovering parts of the truth of his world, and trying to overcome the Philistine pig ignorance of his elders. So much is at stake: the quest for truth, the transformation of this and potentially many other dome societies, and the survival of the human species.
Here our erstwhile hero, who until now has only known harsh Puritan existence and the punishments of elder scolds, learns some of the truth. 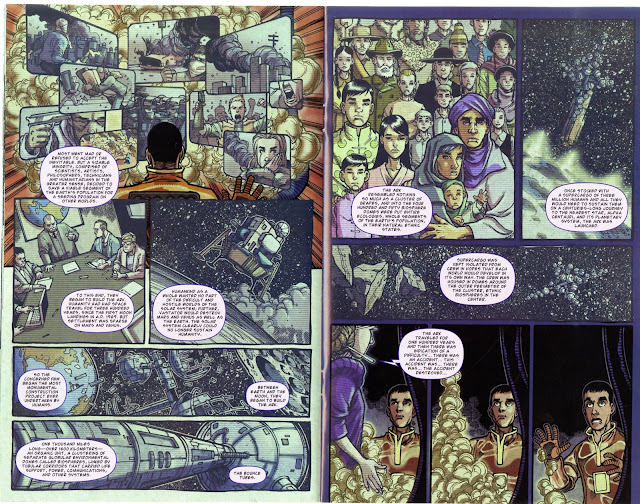 It's about time this wonderful idea was given a proper dramatization.
Alan Robinson's art is innovative and has a hard-edged caricature quality to it. His line style reminds me of some of Ron Cobb's stronger work. And that, my friends, is a compliment!
This is not the first time Harlan Ellison has worked in comics. Far from it.
He's written Batman, the Hulk, the Avengers, a comic book version of his classic A Boy and His Dog (illustrated by Rich Corben), and of course, his Dark Horse series Harlan Ellison's Dream Corridor.
His Batman story for Julie Schwartz was a real treat, with Batman unable to find a single crime while on patrol!
There was also the underground comic Harlan Ellison's Chocolate Alphabet. I also rather liked Marshall Rogers' work on Ellison's Demon with a Glass Hand, which was part of a very well done series of DC graphic novel adaptations of SF and fantasy classics. That series was also my first exposure to George R.R. Martin's classic Sandkings.
This is not intended as exhaustive. Far from it. I suspect that Harlan Ellison's written more comics than I've had hot breakfasts.
As reported on Colleen Doran's blog a while back, this year's Wiscon will be Harlan's last public appearance. He has announced that his health is failing and that he's done with the convention and autograph circuit.
It's Harlan's life, and his death, when such a sad day comes. But I'm a fearful, selfish little thing. The prospect of the world without Harlan in it seems a bit more drab.