I'm from Judy Garland's home town.
When I was very young, my Mother had a 19430s Ozma of Oz with Jon Neill plates. She also had the Wizard of Oz paperback with the Krenkel illustrations.
I ended up with both books when Mother passed, and added them to my modest Oz library. Most of the Krenkel illustrations can be found at this Golden Age Comics blogpost.  Some great Jon Neill works follow it in the link.
Oz has been a big part of my life.
I'll do a separate post on Oz in comics after I'm done with this Best of 2010 run. Suffice to say that there have been some magnificent comics based on Oz, and some dreadful ones.
So when I saw this book, I was skeptical.
Many creators conflate Baum's melancholy and irony with cynicism. For some reason, there are many-far too many- "new, dark and gritty" versions of Oz. It's so tiresome. Remember the SFTV mini-series Tin Man? I believe they even used the phrase "dark and gritty" in their promos. So sad, so wrong. The worst offender in comics may be Caliber's OZ book from 1994.

It's powerful, sleek art. But in terms of Oz, it's just wrong, at least to my lights.
But The Royal Historian of Oz is something rare, a fresh take on a classic. It reinterprets the source material and expands on it without soiling it. As a reviewer on Guttergeek complained, "This is the sort of book that pisses me off because, like any writer, I am sick with jealousy that I did not come up with this great idea."idea. 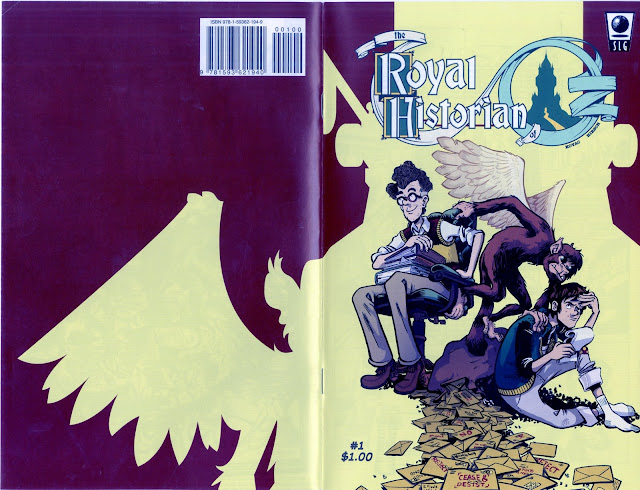 Note the cover price! Slave Labor is to be commended for jumping on the first issue loss leader bandwagon that has served Vertigo fairly well in the last couple years.
In another growing trend, creator Scott Kovac put up a promo trailer for issue 1. Since this was also Slave Labor's contribution to 2010's Free Comic Book Day, that may have been in part an imperative from the publisher. It is one of the better trailers for I comic I've seen, and it nicely sums up some key plot points.

Here's a spread from issue 1, to give a sense of the impressive, energetic art and design. 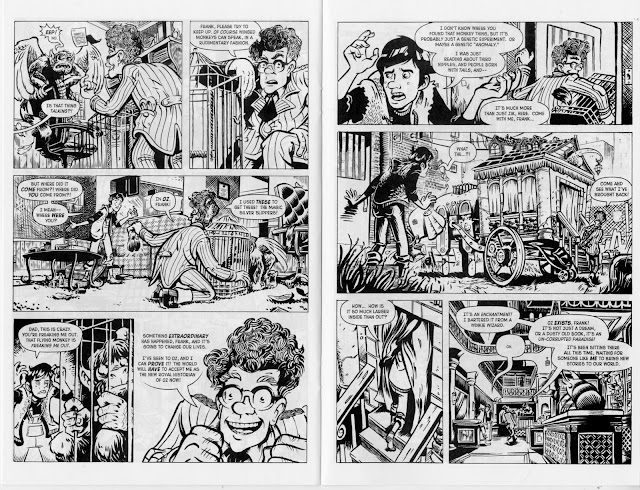 Kovac's other comic work hasn't grabbed me. It's not bad work by any stretch, just not to my taste, but this resonates with me. It's partially due to the subject matter, of course. But I also enjoy his handling of fandom- the description of Oz fans as "a bunch of gay old men with dogs named Toto" shows an understanding of the non-fan's perception of fannish activity, as well as implying the risks of obsessive fandom.
There's also an implicit understanding of the maturing of a father-son bond as the son wakes up to what the father has really experienced, and what the father really has to offer him.
And the fantasy aspects of it are pure fun, handled with ample ingenuity.
This is only scheduled to run five issues. I hope Kovac decides he has more stories to tell in this arena, and they they all live up to the realized potential of these early issues.