I had hoped to post the first page of my 24 hour comic from this year today. Well, tomorrow, but I'm posting a few hours before Sunday, as Fallcon is still running tomorrow.
However, a delay in scanning made posting p. 1 of 24 hour book 2009 impossible, at least short term. Problem to be fixed forthwith.
Meanwhile, loath though I am to do so, I am posting an inventory piece, just to maintain my self-imposed schedule. 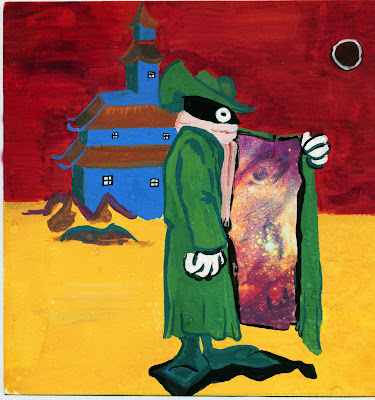 this was a proposed cover for the Spock's Beard album Day for Night. When I met lead singer Neal Morse about a year after I sent them this, he told me that they liked it but it lost out to another concept on a close vote.
I don't often work in gouache. Perhaps I should. I rather like this! It has a simplistic yet eerie feel about it. The nebula inside the cloak is an obvious collage, but I think it works well.
on October 10, 2009 No comments: