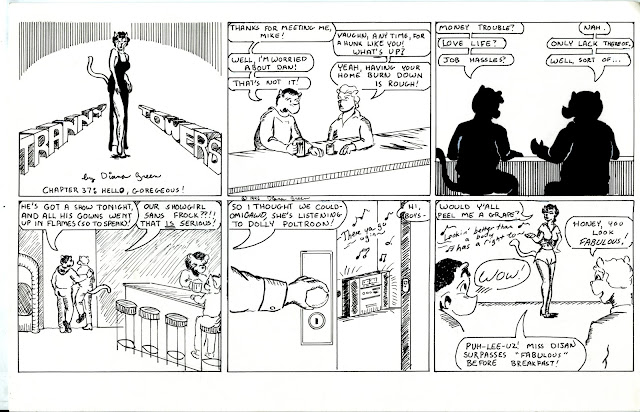 The banner is made from scratch, no overt swipes (at least none I can remember). I took my enthusiasm for pinup art, especially the work of Gil Elvgren, and did some work I think was rather inspired.
The title is an obvious Streisand reference.
Simple layout, a bit more background than in some of the past strips, and a closing "in-joke."
For the last few months of the strip's run, Lavender decided to also run a new strip called "Fabulous Fabio". It was the worst of gay comic strips- bad art, cliches, sloppy lettering and lazy writing. Though it died shortly after this strip, I was quite annoyed at its presence, and wanted to take a little shot at its creator's seeming lack of training and effort. I mean really, not so much that this was running next to my work, but running such a mediocrity near Dykes to Watch Out For or Jennifer Camper's Sub Grrlz? Sad. I was relieved when "Fabulous Fabio" faded into oblivion a few strips later.
I had set this up for one of the next storylines, involving Dan coming to terms with just how deep his drag persona did or didn't go. Trying to leave the door open and all that.
The Dolly Parton reference brings the strip full circle to the original Tranny Towers, a Section 8 building where 6 of the 14 units were occupied by MtF transfolk. Several of my neighbors were huge country fans, and I'd hear drunken singalongs of this song well into the wee hours. Once in a while I joined in. Ah, memories.
I still have a bunch of strips I did as editorial cartoons for TransSisters and TNT News Magazines. I'll run those as a unit after taking a break from this work to get back to the Surrealist Cowgirls. MY work on that for the faculty art show is due on or by Friday, and is about 2/3 done.
For right now, I'm going to do as the song says, and try to look better than a body has a right to.
on August 13, 2012 No comments: