Running late with getting this week's Original Art Sundays up- the page is done, but not scanned- have faith! It's a good one!
Meanwhile, I've been thinking about comics formatting. Not the old Web vs. Print saw, though that comes to mind too. No, I've been wondering about the different sizes that comics appear in. Not the mural "comics" seen in public art, which I also enjoy, but actual print comics.
The smallest comic I've ever seen is the gumball machine comics that Marvel put out in the 60s. Single images with text on the facing page, formatted similar to a Big Little Book, these fit inside a plastic capsule and were vended out of gumball machines.
Product shown actual size, give or take.

The next size up is the tract. This saddle stapled, or sometimes front stapled, long booklets served as the template for the morally opposite Jack Chick tracts as well as many of the Tijuana Bibles. 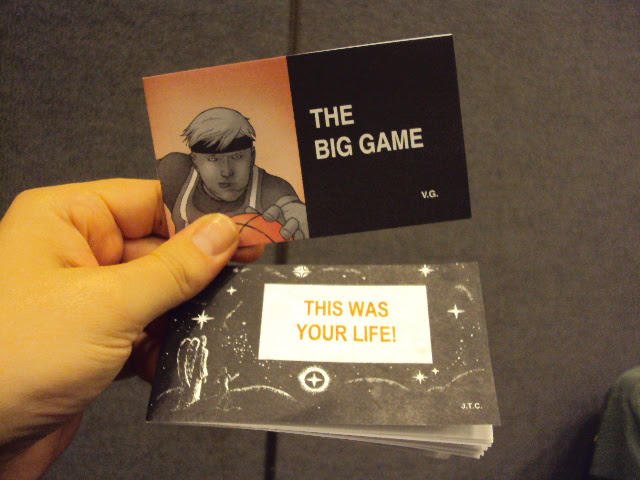 The zine, usually a collection of gatefolded single sheets, very popular in the 90s, is the next size up.
One of the evolutions of the zine is the local annual event, Lutefisk Sushi, which compiles zines and small press comics by Minneapolis area creators into a spiffy box.
This is another one of those things that I don't quite get around to doing every year.

The Treasury Editions of the 70s were the next size up.

Then come the broadsides, comics intended to emulate newspaper sections in size.
Two examples of these are Wednesday Comics and its slightly smaller predecessor, The Clock Maker.


There was also that Giant Book of Comics from the early 70s, sandwiched in between the Treasury Edition and the tabloid, size- wise.
Image to follow when I find the exact title!
The point is that a wide variation in narrative and aesthetic possibilities is offered within the comics format. But before these possibilities can be realized, we must look at the scope of the format itself. If we're talking about comics as printed commodities, we must consider the range of the formats in which they are printed.
This brief overview does not include things like manga phonebooks, European albums, or Russian or African variations.
Looks like there are as many sizes as there are stories!
on August 31, 2010 1 comment: