These entries have dragged out a bit, but I am completing the list today and tomorrow.
A bit of backstory on today's entry.
Last time I attended San Diego Comicon, I picked up a small volume that I chose for reading on the plane ride home: Greg Ruth's Sudden Gravity: A Tale of the Panopticon.
I was so blown away by it, I was sure my reaction would send the plane off course. Ruth's surreal yet oddly comforting nightmare of intentionally distorted reality has a devastating effect on the unsuspecting reader. I elected to use it as a text in my next Graphic Novel course, and Greg was kind enough to join the course for a week of online discussion- very informative, educational and fun, and more to the point, inspiring to comic art students. Many chose it as their favorite book of the semester.
Since then, I've followed his career with great interest. He has illustrated a number of children's books, including the fun Pirate Guide to... series and one based on President Obama's first inaugural address. He's done more comic work, including some Conan illustration and 2012's City of Orphans (still on my reading list). When I saw his new solo book The Lost Boy this year, I jumped at it. As its presence here indicates, I was not disappointed. 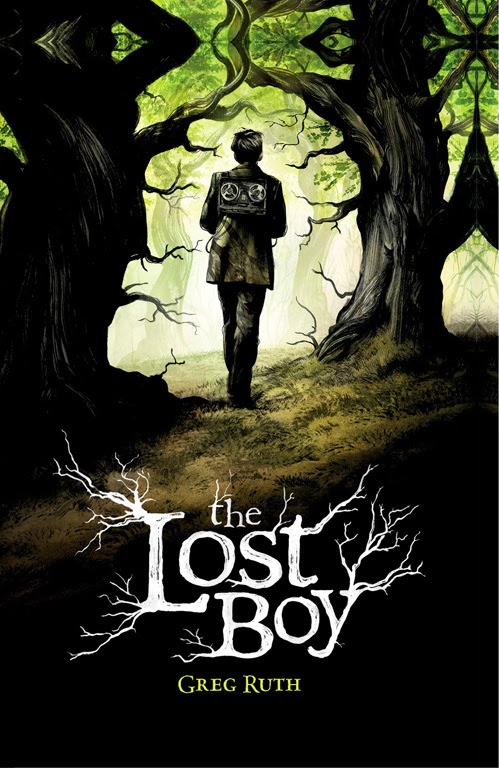 (note: all illustrations for this entry are courtesy of Greg Ruth)
Themes that appear to be central to Ruth's solo work surface here: childhood isolation and vulnerability, surrealism and magical realism in daily life, and a burning desire to triumph over melancholy.
While Ruth hardly has a monopoly on these themes, he executes them adroitly.
This is the story of Nate, a boy stranded in a particularly unwelcoming country house (which at times felt like suburbia) by the career caprices of his parents. Two things happen in short order. He is befriended by a neighbor of like age and temperament, Tabitha. Together, they explore the mysteries of a tape recorder Nate discovers in his attic. The tapes are a record of the mysteriously lost Walt, who years earlier went in search of missing pets only to find...
But that would be telling. Aided and hampered in their search by talking animals, insects and abandoned toys (many of which have eloquent personalities), the pair set out on their quest for Walt.
Ruth manages to pull the reader into implausible situations with great ease. We all feel our lives to be impossible at times, and Ruth taps directly into that. There's an empathy, coupled with a wry wit, to his writing.The latter is especially apparent in Tabitha's dialogue here, and is sorely missed when he capably illustrates the writing of others.
The child's journey into the world of the lost is a classic theme, the basis for works as far-ranging as Peter Pan and Neil Gaiman's Mirrormask (the fractured world into which the child is propelled, also present here, is another recurring Gaiman theme). Despite these commonalities, Ruth offers a singular voice. 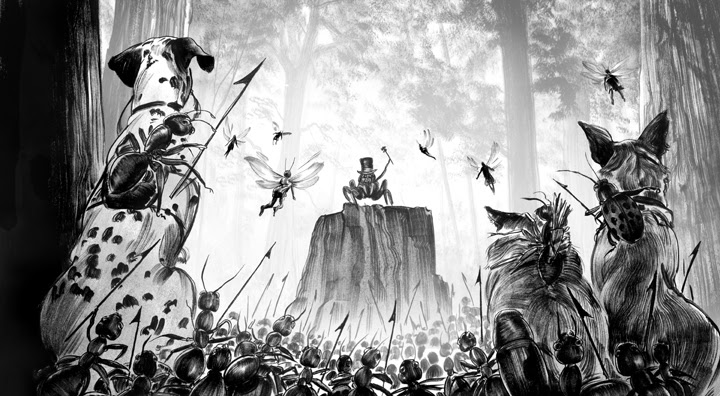 There's another great delight here for me. The presence of talking critters and armies of insects and frogs invokes the heyday of vintage cartoons, a lifelong passion. As I read The Lost Boy, part of me saw it as a really elaborate storyboard for an incomplete Fleischer feature film, a nightmare sequel to Mr. Bug Goes to Town!
It takes great talent and restraint to bring out the magical and the nightmare in the mundanity of the everyday. Ruth uses some subtle visual devices as storytelling aids. The sequences in the present are bordered in black, if they have borders, while those set in Walt's past are bordered in white. 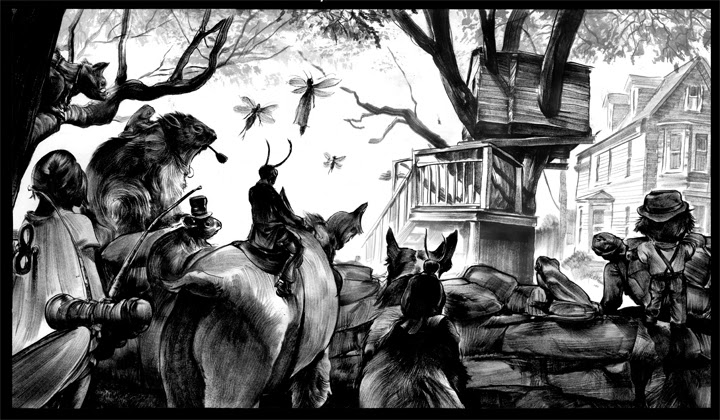 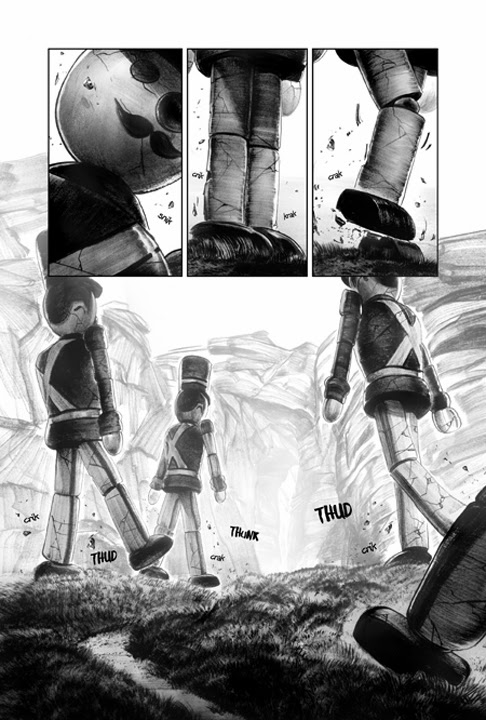 A few critics (mostly Amazon reviewers) found fault with the level of explanation of some plot points- "this or that was not clear enough." I didn't have that trouble. I see nothing wrong with having the reader involved in deciphering the narrative, especially when there's an element of mystery, as there is here. A good reader doesn't need to be spoon fed the story, and a good writer knows that. I have no more respect for lazy readers than I do for sloppy writers. I also respect the fact that the story is not dumbed down for young readers. Kids are a lot smarter than some writers, and many publishers, believe them to be.
As cerebral as this story is, it's action heavy. There's a war on (possibly more than one), with very high stakes. 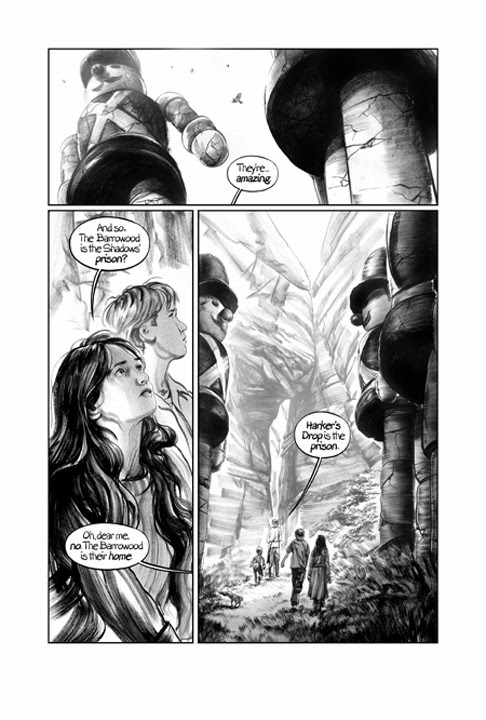 Ruth often uses simple tools to create his eloquent art (Sudden Gravity was drawn entirely in ballpoint pen!). As discussed when looking at Colleen Doran's A Distant Soil, it's always a delight to read the work of a skilled artist who also really knows how to write.
A member of the Out of Step Arts Collective, Ruth works on new projects at a pace to rival that of David Mack or Matt Wagner- consistent, sometimes frenetic, but never a sacrifice of quality to time. The quality and individualism in Ruth's work clearly rivals those creators. I suspect the primary reason his name is less of a household word in comic circles is that he's done less mainstream work than they have. Like them, he's on my list of creators whose work will always get an eager look from me.
I imagine that writing such emotionally intense work with veracity takes its toll on Ruth, which would explain why he's done relatively few solo books in the two decades he's been a comics and illustration professional. That's certainly understandable, but as satisfying as The Lost Boy is, I'm hungry for more. 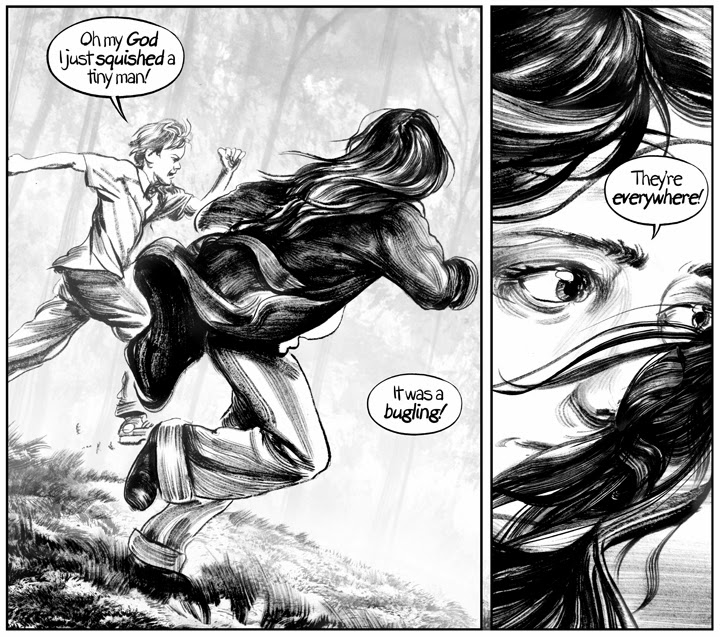 
What the heck, here's one more great Lost Boy page on which to fly away! 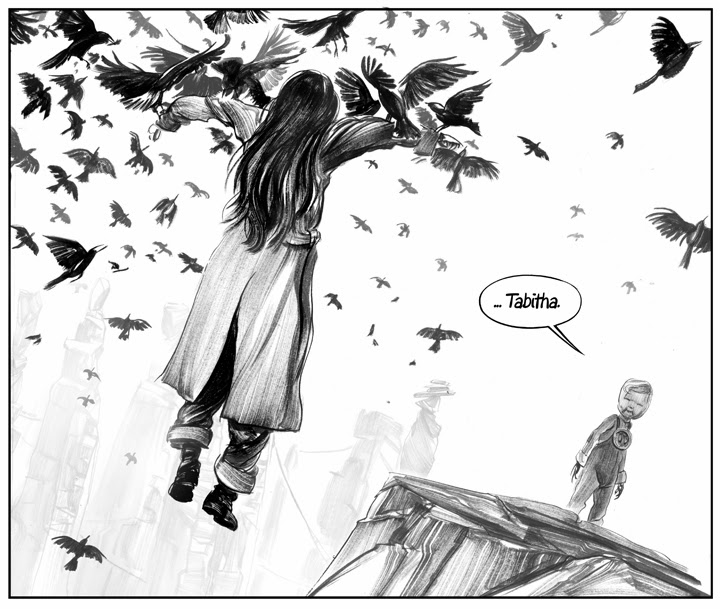