Posting a tad late, technically Monday.
Got in from MNCBA exhausted, slept on the couch for five hours after getting in (!), but our table raised close to $500 for the Comic Book Legal Defense Fund, not counting monies raised at the art auction. Yay volunteering! Yay free speech! More about this later this week.
Right now, it's time to post the next chapter of Tranny Towers. 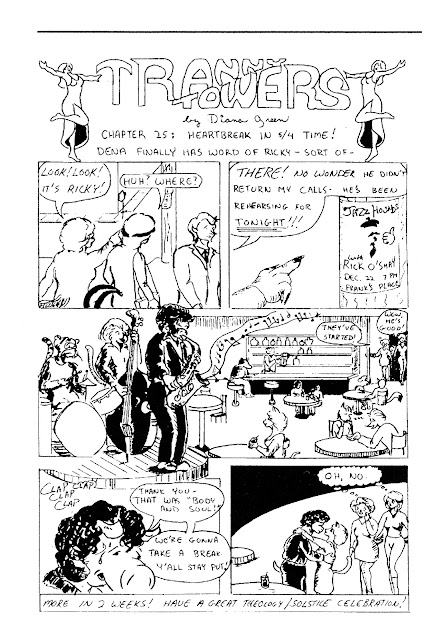 Again scanned from a tearsheet. Some dropouts in this one, notably the lines on the pole.
Quirky little things to notice: Rick's last name is O'Shay, a nod to the classic Western comic strip by Stan Lynde. Tigger is on drums!
This was foreshadowed by the poster on the wall in the phone conversation chapter ("Duke Ellingtoon") which set the stage, so to speak, for Rick as a jazz man.
Brings to mind Marge's lines in the early Simpsons episode: "Lisa, stay away from that jazzman!" (then speaking to Bleeding Gums Murphy) "Nothing personal, I just have  deep fear of the unknown."
Ahem.
Back to the page.
The rendering of the bar doesn't stand up to scrutiny very well, but it's a plausible environment. Had real fun drawing the jazz combo and the design-y hipster poster on the phone pole. I didn't notice till after I saw it in print that I just plain forgot to put cars on the street!
The panel break intruding on the stage between the second and third tiers on the left is a little disconcerting once you notice it, but it scans fairly well.
As regards the narrative,  the climactic moment is the instant of pure dread in a doomed relationship, where you realize that the object of your desire not only does not reciprocate your affection, but offers it to another. In Dena's case, this pain is exacerbated by her competition being cisgendered, or as we used to say, a genetic female.
As the tag line indicates, the magazine skipped a week for Christmas.
Thanks for holding out a few extra hours, and we'll be back next week with the next chapter.
on May 21, 2012 No comments: