I'll post one of these a day until I've reached #1. That will give me a bit of time to think about my choices. I have them chosen, but I do want to review, since I can read a lot of comics in a year!
#10 is the most recent issue of Terry Moore's ECHO.
For those not in the know, ECHO is the story of a broke photographer who happens onto a weapon test site, and is deluged with refuse from said weapon. This refuse attaches itself to her skin, seemingly irrevocably. The material also contains some of the consciousness of its inventor. Many people are trying to kill our photographer. Alliances are formed and a chase ensues. Pieces of the puzzle are doled out to our heroine (and her reluctant partner, the boyfriend of the late inventor) on the run. That's a very stripped down version of the plot.
The current issue, #17, takes the storyline into uncharted territory as this smart, soulful adventure book delves into areas of physics, human evolution, philosophy, and tells us the connection between the hydrogen bomb and art forgery. All this happens in a cafe conversation over a salad and a glass of water. 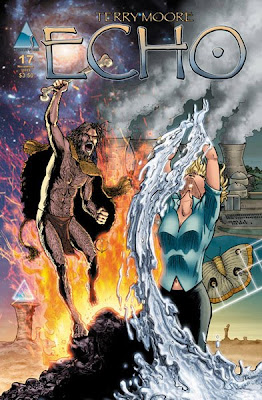 I was so disappointed when I saw this cover. This has been an intriguing read, but I was starting to feel like  I did around the middle of Strangers in Paradise- great story, but get on with it already. And this cover looked to me like a good Marvel cover- lots of pyrotechnics, but not about anything, really. Boy, was I wrong! It's been a while since a comic was so good that I was frustrated to not be able to read the next issue right away. So it was with this one. So many ideas and emotions crammed into a scant 24 or so pages, and let's add, a backstory that pulls previous events together in a way that, while not completely unexpected, is at least unorthodox and so heartfelt.

I don't know if Terry Moore lost his steam for a while or I just got frustrated. Whichever it was, he's back in full force with this issue, and this book is a high point for the year.

Tomorrow, #9, with a silver bullet!