Really, when Harlan Ellison and Paul Chadwick collaborate, how could the result not make the list?
Chadwick's Concrete remains one of my two favorite superheroes (the other, oddly, is Herbie, the Fat Fury, with James Robinson's Starman as runner-up). And Ellison is - well, Ellison. I'm relieved his health appears to be holding, despite reports of his imminent demise a couple years ago.
Concurrent with the Strange Armor storyline, a Concrete short story appeared in which our heroes visited the home of Dwayne Byrd, a not so thinly veiled reference to Ellison's preferred nom de plume, Cordwainer Bird. The story, Byrdland's Secret, used Ellison's life, work and philosophies as a starting point to muse on the role of art and literature in our lives, and the urgent, almost primal need to cling to a spirit of adventure in those lives. 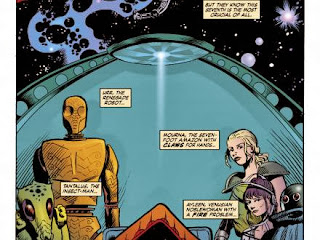 This story appears at first blush to be old-school space opera- some fun ideas and elaborate trappings. However, as is the case with most of Ellison's work, it quickly becomes something larger than the sum of its parts. An aggregate of strange beings, given singular abilities by the perversion of their forms in the names of profit, politics, power and entertainment, is off on a quest to do - well, something. Only one of them knows their mission at its outset. At this point, it feels a bit like a fairly conventional superhero narrative, albeit a smartly written one.
The plot and its implications quickly thicken.
The stakes are no less than the nature of existence, as a reptilian life form is trying to rewrite not only history, but evolution. Unbeknownst to the rest of the universe, this group of rejects is fighting for the existence of everyone, and should they succeed, nobody will know.
There are several Ellison themes that come into play here. Of course, the humanizing of those considered rejects dates back to his civil rights work, and the classic short story The Discarded. And the tragedy of great work going unrecognized has been a recurring theme in Ellison interviews for decades. 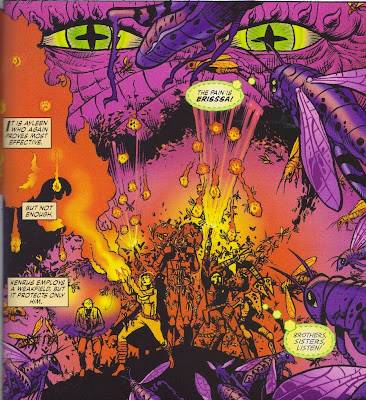 Paul Chadwick's work here is as strong as anything else he's done. While I cherish the populist notions in Concrete, his vivid imagination is seen in other works, including his The World Below mini-series and one issue of the classic Dr. Strange mini-series, The Flight of Bones. In 7 Against Chaos, he's given the opportunity to stretch thematically and offer some beyond cool science fiction illustration, and he rises to both challenges admirably. The work is reminiscent of the best of the 1960s DC science fiction stories in terms of pure imagination and joy, while holding to a contemporary quality. This is not a nostalgia piece, but it does recognize the value of past works, a challenging balancing act, well executed.
And it's cool to see, and a great adventure to read!
7 Against Chaos begins with a fairly direct, albeit elaborate, scenario and sweeps the reader along to ask complex questions about the nature and purpose of life, all while riding an interstellar roller coaster. In addressing the best of 2013, I've talked about works that have value as pure enjoyment, and works that say something deeper and challenge the reader. This is both. I pray that Ellison and Chadwick collaborate again!
Next: Best Comics of 2013, No. 6, gets lost.
on January 14, 2014 No comments: