I really want this to be good, but the odds are against us.

The Phantom is one of the first superheroes, a sort of jungle Zorro/Batman type character. The suit is a bit busy, to say the least, but as his best The Phantom drips atmosphere and adventure. 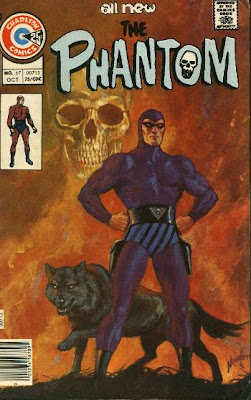 This cover is by the late great Don Newton, for my money the best Phantom artist ever, as is this one: 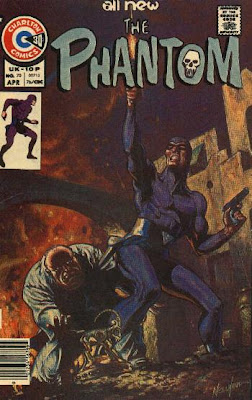 The story in this issue is a wonderful pastiche of the Maltese Falcon, as evidenced by the Sydney Greenstreet character.

See, they don't need to fix or retro-fit The Phantom. He already has it all- legacy, wolves, pirates, jungles, all the stuff of adventure and legend. The Ghost Who Walks, the Man Who Cannot Die.

So why do this?

I get it that every creator wants to make a work or story their own. But these don't feel like creator driven decisions. The secret society training the reluctant hero. Vengenance for slain parents. The wisecracking girlfriend. From Batman Begins to The Hulk the studio cut of Daredevil (the director's cut is wonderful), these things have become so formulaic that I could write one without trying, as I suspect could many other people.

Anybody want to place money on the archenemy being responsible for the death of the parents? They use that one a lot, too.

Formulas often come from corporations and a perception of what's salable, as opposed to what makes a good story. While it's possible to create a good story that's salable, bear in mind that formula is something you feed babies until they're ready for soemthing more substantial.

The Phantom has been filmed numerous times. There was the 40s serial, a cameo in Yellow Submarine, the Defenders of the Earth cartoon, and the 1996 Billy Zane film, featuring the late great Patrick McGoohan as The Phantom's predecessor and father. Flawed as well, but a much better film than is often acknowledged. For one thing, it was a period piece, which added to its charm. For another, it was tightly written, smart and fun to watch. The creators managed to be faithful to their source text and still tell a good story.

So as we face yet another round of superhero remakes and sequels, beginning with Iron Man II (in fairness, the first Iron Man film was much better than it should have been, much like Twain's comment that Wagner's music is better than it sounds), let's hope for true creativity.
Ars long, vita bevis and all that.
As a case in point, here's a scene from what I still consider the best superhero film ever made.