I'm finishing up the next installment of by Best Comics of 2015 series, which is actually going fairly quickly. But I'd like to take a minute and post some new art.
I was given a grant to complete my graphic memoir, Sharp Invitations, so I'm going to be hauling @$$ to get 100+ pages done and to the printer by mid-May. I've been working on setting up my studio space properly and am nearly there.
But I went and got all inspired the other day, and worked up something else just for fun.
I'm all atwitter over the upcoming Dr. Strange movie. I've been a fan of Dr. Strange since I first read the character in Strange Tales in the early 1960s, when he shared the book with The Human Torch and The Thing. Dr. Strange has been filmed three times so far, not counting appearances in Spider-Man cartoons and the like. The first was an ambitious but deeply flawed made for TV movie from 1968, starring Peter Hooten. The second was a well-done pastiche, 1992's Doctor Mordrid.

The most recent version was the 2007 direct-to-DVD animated feature version. It was made by Marvel and was mostly quite worthwhile, but still not the Doctor as I wanted to see him.
I have high hopes for the upcoming Benedict Cummerbatch film. I usually try to ignore advance publicity for superhero films, but for this one and for the upcoming Wonder Woman film, I can't help myself!
Thinking about the earlier versions of Dr. Strange and about how much energy is spent in alternate worlds in comics got me musing. What if the 1978 version wasn't the first Dr. Strange film? 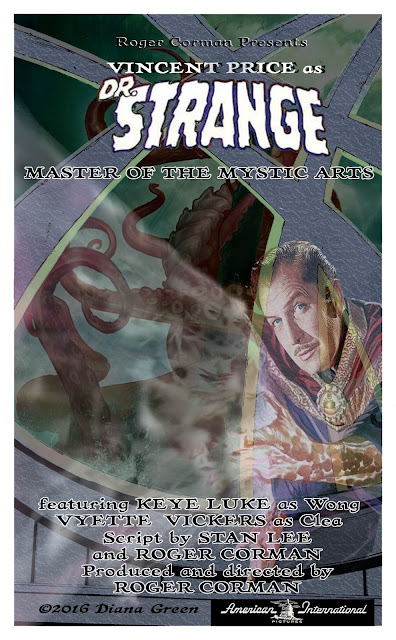 I had real fun casting this and refreshing my Photoshop chops! Rather than try to incorporate Dormammu or Nightmare, I chose a Cthulu critter. I'm not versed enough in that mythos to know which one, sorry. Some layer effects bought the classic window to life. After some debate, I went with the Doctor's astral form on the final image. As for the Doctor himself, I took Price's head from an old LP and grafted it onto an Alex Ross painting, which I also manipulated a bit.
I resisted the temptation to cast David Niven, who was the model for the character in the comics according to Stan Lee. Vincent Price seemed perfect. Although the years don't work, it would be cool to see Keye Luke, Kato from the Green Hornet serials, as Wong. I considered going with Bruce Lee for that one, but thought it a bit too obvious. For Clea, Yvette Vickers, star of several noirs, pinup girl and star of Attack of the 50 Foot Woman, seemed the best choice. It's a bit a conceit to throw my copyright on this, since I clearly don't own Dr. Strange, but if it starts floating around the Net, I wouldn't mind some credit for my work.
This was a fun diversion to get my creative juices flowing again. I'm going to be in the thick of graphic memoir creation (while I continue to work work FT as an AIDS caregiver and teach writing at MCAD), so unless I don't have time to post, I'll be doing so, since I'll have a lot of material!
on January 03, 2016 No comments: