Saying goodbye to my Muffin

I usually don't post much really personal writing, but bear with me.
My ex's daughter, Emerald Rose Foss, was killed in a car crash on Friday, October 9. As today is my ex Linda's birthday, it strikes me that it's time to write about this.
Linda was pregnant  twice during our time together, and miscarried both times. We both took it hard, but it seemed to me at the time that she wanted to be a parent more than I did.
We were together for the better part of 7 years. Our parting was complicated, hard and painful, as partings usually are.
Linda and I remained close to varying degrees after we parted, no small feat given the conditions. When she was pregnant again some years later, I was so happy for her (at least when I wasn't preoccupied with my own completely unnecessary melodrama).
I knew Emmy Rose all her life, not as much in the later years as I could have. But early on we were the best of buddies. I started calling her Muffin when she was 3 or 4. She said, "I don't like that." I told her, "well, you can call me Muffin if you want to too." So that's how it was. She was my Muffin and I was hers. I went from changing her diapers to taking baths with her and reading her to sleep.
I got a very small taste of what it was like to be a parent. Not so much that I could say I got it all, but enough to know I might have been good at it, and that it was something that would have made my life fuller.
But misgivings are of no use, except to understand.
Emmy and Linda came to my graduation from MCAD, and I was so glad to have them there. 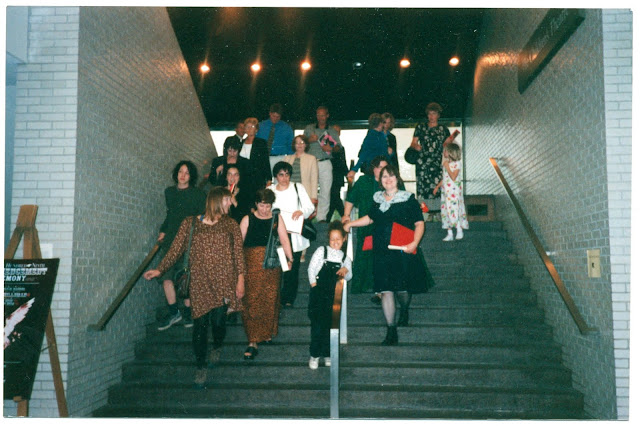 This is after the ceremony. That's Emmy Rose in front by the center rail (what a smile!), flanked by Kim and Jenny to the left and me to the right (in the blue dress), and Linda right behind me. 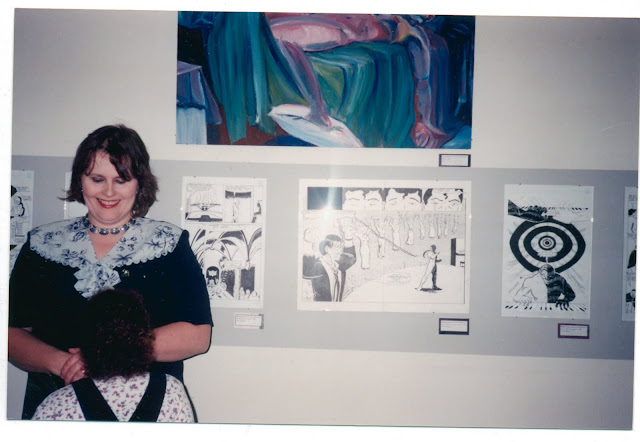 Here's Emmy asking me about my work at my Senior show, again after the ceremony. This is in 1999.
It's a shame Emmy's face isn't in this picture, but I hope my smile says it all.
Eventually Linda and Emmy moved to Grand Rapids to be nearer Linda's family. I saw them when I could, but I must confess I missed many opportunities.
I had been up North to see my family for my neice's baby shower a few weeks earlier, and thought about calling on them. But I made the fatal error of thinking, "I'll do it next time."
Two weeks later, the phone call from my sister telling me about Emmy Rose's death.
I wanted to say something profound at the funeral, something deep and worthwhile. What came out was a pile of blubbering and a few kind words for Linda and her family. I don't think anyone minded, but I was embarrassed and frustrated with myself.
I had it all worked out in the car, and none of of it came out. I know, it's not about me, but it mattered to me to say what I had to say, and I blew it.
Here's what I wanted to say.
I'm trying to make sense of this. Of course, it doesn't make any sense. Like the song says, I can't shout about spiritual labels when little ones die and big ones thrive. Why should Emmy Rose suffer?
About 8 years ago, I went to a benefit lecture/ prayer service some Tibetan monks were giving. They were trying to get their brothers and sisters out of Tibet before the Chinese killed them, which sounded like a good idea. During the lecture, one of the monks talked about the elimination of suffering.
There was a Q & A. Trying to come off like a big deal intellectual, I asked the monk if the elimination of suffering was a good idea. Isn't suffering necessary to appreciate joy?
The monk said, "Yeah, maybe. But I still don't like it."
That floored me.
The Book of Job says "man is born to trouble, as the sparks fly upward." Aside from the poetic imagery, which I really like, that means something more. We are the sparks that fly upward.
We are sparks. We are souls with bodies. We are energy wrapped in stuff.
That's all we are.
Energy cannot be created or destroyed, only moved. So where did the energy go when it stopped running Emmy's body, this body that was 90% smile and 10% fire?
Where does the energy go?
My money's on up there, to rejoin the larger energy we call God.
I will miss Emmy for a long long time, and try to forgive myself for missing as much of her life as I did, while embracing the time we did have together. I know it's going to be hard for Linda for a long time, and I will make more time for her if she'll let me.
So long, Muffin. You did the good work. I'll catch you on the other side. 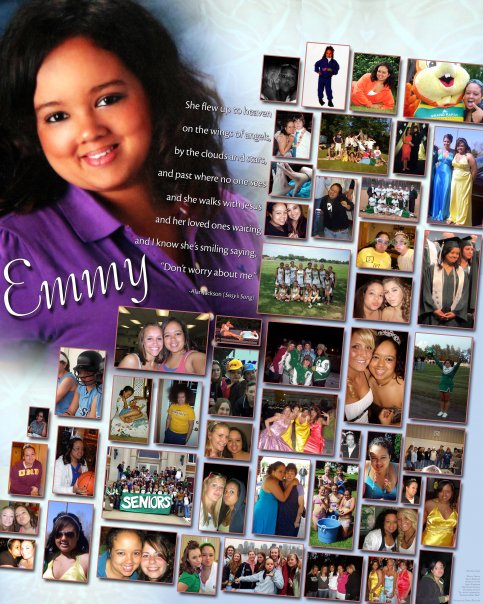 This is taken from the facebook memorial page for Emerald Rose Foss.