My admiration for the work of Jeff Smith is hardly a state secret. I treasure BONE and its related stories ROSE and Stupid Stupid Rat Tales no end, and was delighted by his interpretation of the SHAZAM! legend. The latter made it seem like Smith was addressing recurring themes in his work- not a bad thing, but one that can lead to predictability in even the most capable hands.
How wrong I was.
When RASL debuted at San Diego a few years ago in an oversized teaser edition, it was unlike any of his previous work. Certainly, there were dire and grim aspects to all the predecessors of RASL. But this was downright gritty. 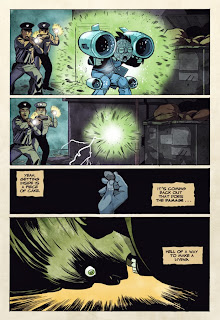 The story of an inter-dimensional art thief, RASL also touches on near-Promethean scientific concerns as it plays with concepts from the work of Nicola Tesla. There's also mythic trappings from native American faiths, and a seemingly autistic girl who may or may not be God. As the story unfolds, we learn that our thief is a scientist on the run, trying to hold onto his discovery.
It's also a story of love, loss and betrayal.
While these themes are clearly present in the earlier works, they take center stage here. This is a much harder edged, much more adult story than the BONE or SHAZAM! material.
In addition to the thematic concerns, this work is noteworthy for its coloring. While past color versions of Smith's work have always been worthwhile (note that SHAZAM! has only been printed in color- I'd be curious to see it in B & W: an artist's edition, perhaps?), the color really stands out here. Tightly controlled palettes, low key color (even in the brightest scenes), and use of color for mood and atmosphere, beyond the obvious and blatant uses of color (skin should be this color, etc.) make this a remarkable achievement.
Smith has offered a singular work here. His current online book TUKI, which I am woefully behind on reading, is every bit as good and every bit as singular as its precursors.
Again measuring up to standards set in past works, RASL is offered in a very affordable hardcover single volume, along with separate volumes of each chapter and a deluxe and super spiffy slipcased hardcover edition (sold out, but there is a deluxe HC at Smith's website for $10 over the base price of the HC).
I'm not a shill for Jeff Smith, really I'm not. But good work deserves both attention and commerce!
Over the years, I read and re-read Jeff Smith's works. The themes are solid and challenging, the art is consistently high quality and moves the story along with deliberation and precision (Smith's background in animation has clearly honed his narrative timing), and the books are exciting every time I open them. As I've lamented ad nauseum of late, my finances are precarious, but I'm mulling what I can sell to secure funds for the deluxe edition of RASL. Reading the public library copy again just won't cut it on this one!
Next: Best Comics of 2013, No. 7: two masters working at the peak of their game. 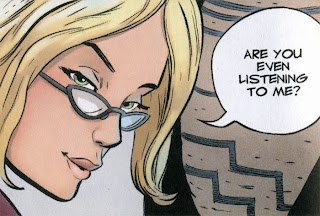