The Lone Ranger: A Brief Media History and A Caution

The new page of A Private Myth is giving me fits, and I have a massive deadline tomorrow. So art on the back burner again for the (brief) moment, but never completely off the stove, to torture the metaphor.
I'd like to chat briefly about something else.
The first images of the forthcoming Lone Ranger film are out.
This on-again, off-again project has the potential to do everything for the Lone Ranger that the other recent film did for his grand-nephew, The Green Hornet. Caught a couple minutes of that this morning by accident, and it is every bit as painful as I feared.
You all knew the Green Hornet and The Lone Ranger were related, right? The Hornet is Britt Reid and the Ranger is his grand-uncle, John Reid.
Ahem. Be that as it may.
This is what the Lone Ranger and Tonto looked like in the original comics. This page is from a bit later, but the style is largely the same, if a bit more refined. 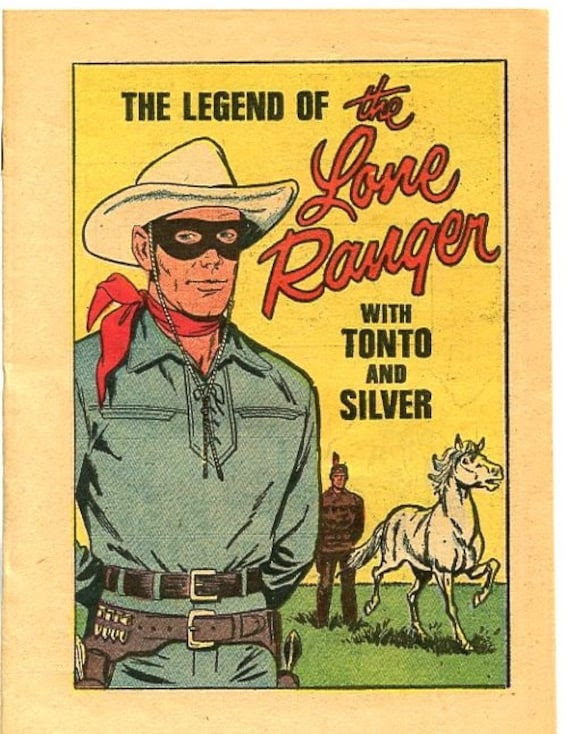 This is what they looked like in the classic 50s and 60s TV series.

Note that Tonto is played by a Native American, one Jay Silverheels. While there are jingoistic aspects to the characterization, Tonto is written and played as smart and honorable. 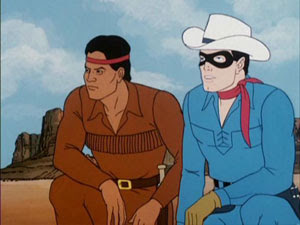 This is their appearance in the 1966 cartoon.
Note that there's a consistency in costume and overall appearance of the characters. Again, Tonto is presented as secondary but equal in skill to the Lone Ranger. This is as it should be, since the Lone Ranger would not have lived or become the hero he is without the intercession of Tonto.
John Reid was left for dead by a band of raiders. He was the sole survivor, the lone ranger to live, hence the name. Reid was orphaned in the attack. Among those killed were his father and brother, also Texas Rangers.
Tonto restored Reid's physical health, trained him in fighting and survival techniques, mended his spirit and gave his new life direction beyond vengeance.
The model of orphaned masked vigilante has numerous precedents. Batman and Zorro come readily to mind.
The character of the Lone Ranger predates Batman, who is also preceded by Zorro. The chronology is as follows.
Zorro debuted in Johnston McCulley's 1919 pulp novel The Curse of Capistrano.
The Lone Ranger began in a 1933 radio show written by Fran Striker.
Batman  was created by Bob Kane and Bill Finger. He first appeared in Detective Comics no. 27, cover dated May 1939. 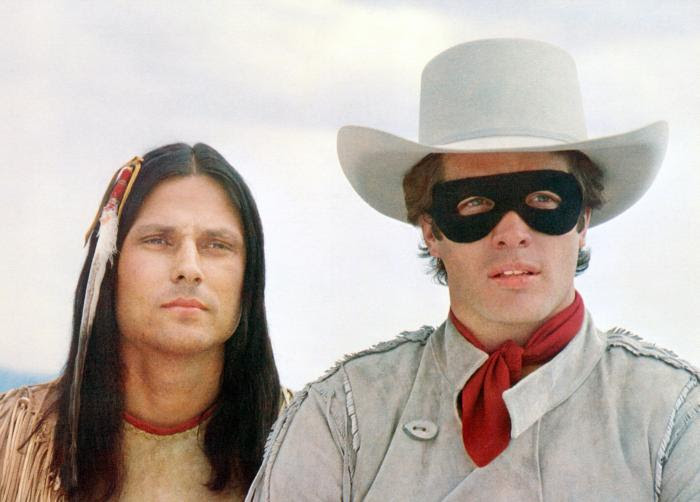 The Lone Ranger has appeared in other series and films, most notably the 1981 Legend of the Lone Ranger, starring Kilton Spilsbury and Micheal Horse. Despite some minor modifications, the film was largely successful in its treatment of the characters. Again, Tonto is played by a Native American.
This film's flaws were twofold. Spilsbury's voice was too squeaky to do the character full justice, though he did the job admirably despite that limitation. The big obstacle to this film came off screen, when TV actor Clayton Moore was enjoined from playing his old character publicly in promotional events. He had been playing the Ranger for supermarket openings and events at malls, both as a source of revenue and to keep the Ranger's ideals alive. The studio's action against him left the film with a black eye- kind of a shame, as it's a fairly good film.
The character was largely dormant for a time. Topps Comics (an offshoot of the bubblegum card company) did a fairly good Lone Ranger title in the 1990s, and the Cary Bates/ Russ Heath comic strip from 1981 -1984 remains a largely unsung watermark for the character.

The current Lone Ranger comic from Dyamite Entertainment is superb. While the original 25 issue run is slightly better than the current storyline, both boast a nice balance of character driven story and action. The original artist, Sergio Cariello, was a perfect fit for the book.

And now the forthcoming Disney film, currently scheduled for 2013.

Really?
I know it's unfair to judge an unseen film from one still and a bit of publicity, but come on.
Really?
A black suit and Johnny Depp in whiteface? I know they wanted some name recognition and Depp has long been eager for this project, but are there no Native American actors who could play the role?
This look, coupled with the news that the film is being given a supernatural bent (abandoning the studio's original "vision" of The Lone Ranger as a camp comedy) does indeed give me pause.
Just do the character justice.
He's a noble, plausible character. There's no need to make his story a joke or a magic show. Let the Lone Ranger's nobility shine through.
For a change, I'd like to see a major studio take a chance on doing a superhero right. There are plenty of good bits in some recent Marvel films, and in some of the DC stuff, but as this and The Green Hornet demonstrate, there's still a tendency to misunderstand or ridicule the concept of someone taking off on his own to right wrongs.
Consider the Lone Ranger's Code. These are not platitudes to ridicule, they are words to live by:
"I believe that to have a friend, a man must be one.
That all men are created equal and that everyone has within himself the power to make this a better world.
That God put the firewood there but that every man must gather and light it himself.
In being prepared physically, mentally, and morally to fight when necessary for that which is right.
That a man should make the most of what equipment he has.
That 'This government, of the people, by the people and for the people' shall live always.
That men should live by the rule of what is best for the greatest number.
That sooner or later ... somewhere ... somehow ... we must settle with the world and make payment for what we have taken.
That all things change but truth, and that truth alone, lives on forever.
In my Creator, my country, my fellow man."

I was blessed to see Melanie Safka perform live this evening.
I cannot tell you how delightful it was. Her self-deprecating humor, couple with her spiritual strength and an incredibly strong voice and her son Bo's virtuoso guitar (and bowed guitar!) playing made for a highlight of my concert going life.
I shot videos of three songs. While the lighting on them was atrocious, I will be posting them soon anyway.
After the show, I chatted with her very briefly about art and music as businesses, about Isle of Wight, and about Jimi Hendrix.
I posted my little interview to YouTube with no editing and quick titles. 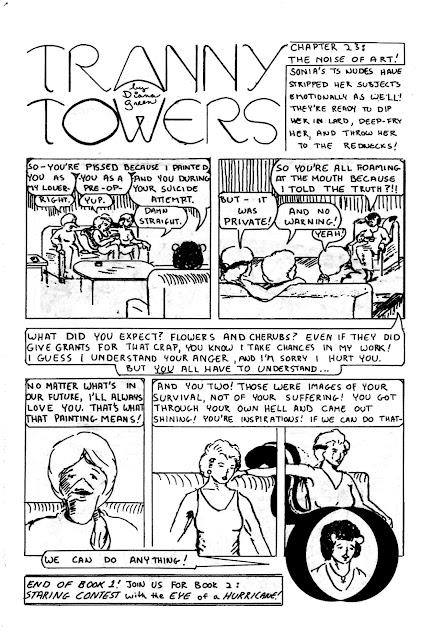 Back in the saddle, in so many ways.
On my birthday, I finished the inks for this piece.
Here's the original layout, with the logo block on the bottom. 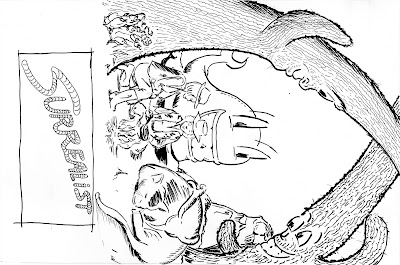 After some Photoshop dinkery, here's the revised layout with the title in place and completely lettered. The typeface is called Bleeding Cowboys, and it's one of those limited use decorative fonts that's worthless for anything except select instances. Luckily for moi, this is one such instance. 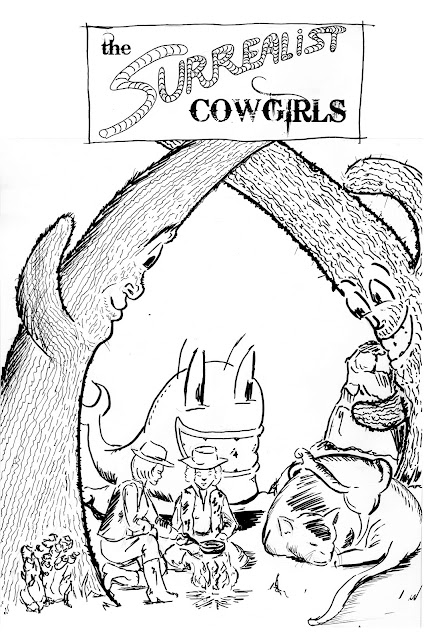 This is almost exactly what I envisioned for this cover. Very happy, or as Whalliam would think, "happy."
I love the ropey text of the word "surrealist". I want to keep the sky simple as opposed to dropping in my usual absurdist elements- this one is about the mood and the characters. Think Charles Russell meets the Fleischer Brothers!
I'm working on adding color and dropping in my company logo, numbering and pricing indicia. But rather than keep folks waiting any longer, I'm posting it as a Work in Progress.
Next: a Tranny Towers page.
on March 04, 2012 No comments: