Still writing like a fiend and a mile behind on grading. I have a total of 26 entries left to complete for the long-overdue Comics Through Time project, and am trying to give it priority without harming my teaching career in the process.
Always a juggling act, this academia.
Also inching along on the next page. One of these days I'll get frustrated enough to take a couple hours and put the finishing touches on it.
Meanwhile, here are a few older pieces for your enjoyment.
First up, a traditional airbrush piece from 1991. I always liked this one, but most folks who have seen it are lukewarm to it, for unspecified reasons. 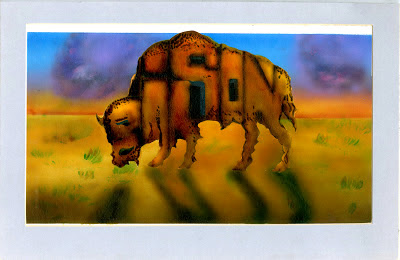 I like the fact that it's hand work! I really miss my old Badger airbrush- no idea what happened to it. I suspect I lost it in the Great Relationship Disaster of '93.
So it goes.
The grasses could be a little subtler, and the fade to the sunset a bit more gradual, but otherwise this piece really grabs me.
I always thought this would be a nice T-shirt. Please don't steal it!
A few years later, circa 1997, I completed a handful of illustrations for a proposed children's book. I had written it as well. Sadly, most of the text is gone now (though I could rewrite it fairly easily, I suppose) and these illustrations are pretty much all that's left.
The book was an alphabet book on pirates.
There were a couple other pages that I liked, but they were too derivative of other works- in one case, Charles Vess' work on the Marvel graphic novel The Raven Banner, in another, Joe Orlando's pirate pages in Watchmen- so if I ever move farther on this project (big if!), I'll rework those.
Here are the pages and their alphabetical topics:


Mostly painted with colored inks on heavy watercolor paper.
Again, there are things that work here and things that don't. I'm most pleased with the image of women pirates, because my research was so spot-on, and because I like the mood of it.
The girls looking on in the bottom corner are the ostensible stars of the book. The blond is exploring the world of pirates and immersing herself in it. She shows up on scattered pages. I thought every page would be a bit much.
Next week- more something. I hope for a new page, but- more something!
on October 28, 2012 No comments:

Back after three weeks away.
Oh my Lord!
This Encyclopedia project is killing me, but I'm almost done. Only 28 entries to go.
Meanwhile...
I've been poking at this whenever I had a couple minutes. You may recall that I posted the black & white art a while back.
I'm not sure if I consider this final- too tired to render a verdict at the moment- but for now, I'm happy with it. 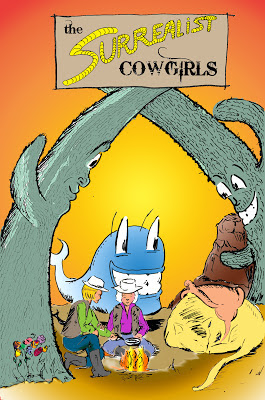 Got WAY hung up on the details, but I think it came out OK. My other big idea was to do a pastiche of the cover for Superman Annual No. 7, with Whalliam sitting in for the Superman statue.
But it struck me as a bit overdone.
Not that this idea is all that fresh, being derivative of Laugh Kills Lonesome by Charlie Russell.
next week: either an oddment or the overdue new page!
on October 21, 2012 No comments:

Haven't posted for a few weeks, after an extended run of meeting my self-imposed deadline.
Now that I'm almost over a nasty bout of shingles and a couple other deadlines have passed, I'm happy to get back to it.
Today's offering is inspired by a bit from the original Beverly Hillbillies series. Jethro, Ellie Mae and their dates were at the drive-in watching Broturra, The Swamp Monster, which was really some clips from the Danish monster movie Repticilicus!

I remember Ellie Mae shouting "yonder comes the swamp monster!" I thought it was a great line, absurd as all get out, and I coupled it with my love of Leave It To Beaver to create this odd little page. 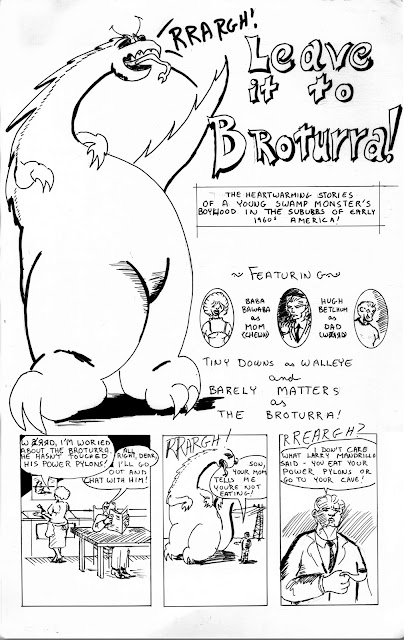 Another little story I never finished, but it was more an exercise in silliness than anything else. Funny thing: I didn't know Reptilicus was Danish when I gave the father figure that name!
I still haven't posted the few images I took at the closing reception for the MCAD Faculty Show, or the new piece done for that show.
The next Cowgirls page is not yet done but is closer.
More art soon!
on October 01, 2012 No comments: