Let me begin with a confession. I have committed a stupidity of immeasurable proportion.
From the drive to Ordway Center, through the performance, and for a couple hours afterwards, I had it stuck in my head that Rigoletto was by Mozart.
Oh, I knew better, and I had the program in front of me to correct my error. But it was just one of those dumb things. Perhaps I was thinking about how wonderful Marriage of Figaro was a few months ago. Perhaps NPR was riffing some Mozart earlier in the week and it got stuck in my head, a little ear worm. Whatever the rationale, I had this stupidity riffing in my mind. Rigoletto, by Mozart.
Let me correct myself, as I write about the MN Opera's performance of Rigoletto by Giuseppe Verdi.
Let's say it again. Rigoletto by Giuseppe Verdi.
And me being an Italian. Oh, the shame, the perfidy.
I hope this absolves me of all mea culpability.
Ahem.
Please note that there will be spoilers.
As the story is centuries old, I don't think it's much of an issue.  My sketches from Media Preview night accompany my remarks.
MN Opera does not disappoint. While not as engaging as the aforementioned Mozart work, Rigoletto was well staged, expertly sung and played, and ran an emotional gamut in which the whole was larger than the sum of its parts. Olafur Sigardson took a marvelous turn in the tragic title role, the court jester whose daughter is prey to the Duke. Matt Boehler's performance as the assassin Sparafucile offers an emotional gamut, from the cold precision of the profession to a stubborn pride in his work bordering on the comic- "I'm an assassin, not a thief." I regret that my sketches of him in the role were not up to my standards, and will not be shared.
As has been noted repeatedly in the 267 years (!) since its debut, Rigoletto is an unrelenting work. The arias fold into one another almost seamlessly, offering little respite for performer or audient. It's to the credit of the ensemble that the work remains vibrant throughout its two and a half hour (plus) running time. The story is very much the stuff of soap opera and high drama, consistent with other Victor Hugo works (it's based on a Hugo play). It's over the top and it remains real life, though couched in a fiction.
Sidebar: my favorite Hugo work of those I know, The Man Who Laughs, was adapted for stage six times, three of them as musicals, but was never an opera. So it goes.
Even in light of the sometimes over the top plot, the issues the story raises are still sadly relevant. A man with immense power who is willing to destroy anyone who ridicules him, who vows to take whatever women he chooses- sound familiar? Sadly so.
Joshua Dennis brings a fire and torment to the role of the Duke, taking it beyond the dimension of the harrasser or the abuser. That's in the character, to be sure, but Dennis's interpretation shows the intricacies that drive a man to such acts, with depth and precision but without apology.
The interplay between Marie-Eee Munger's Gilda and Olafur Sigudarson's Rigoletto is impassioned and heartbreaking. Both bring an earnest, deep sense of loss and yearning to their roles.
The sets were consistent with those of Dead Man Walking, in that they made effective use of digital lighting for textures and of a multi-tiered set, used more sparingly here.  I somewhat prefer the mobile proscenia of Figaro, but I recognize that it's not right for every production.
The glowing animal masks of the bandits in the forest during Act II were noteworthy, a treat for the eyes.

The ultimate tragedy of the narrative plays with devastation.
Rigoletto holds his daughter in a pieta pose. Though overused to the point of cliche, it's very moving here.
There's an inevitability to this ending. I was reminded of a line from one my favorite rock musicals, Phantom of the Paradise: hearts are broken and the bad guys win. Sometimes that's life. Much as we would like it to, good does not always triumph. Is it wrong that our art sometimes reflects that? I think not, else this work would not have endured. 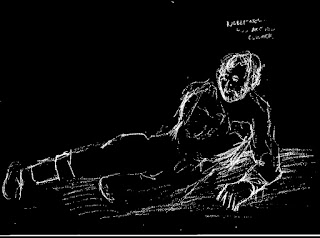 As the pencil lines were so light as to be almost invisible in the last piece, I tried a simple inversion and was pleased enough with the results to post them.
Rigoletto runs at the MN Opera through March 31. You have three more chances.
Go.
You will be glad you did.
Next opera: Thais.
Next art: back to the graphic memoir. Big works are like that. They take a while.
on March 25, 2018 No comments: