We're back to Sharp Invitations.
Got this page done at last! After wrestling with the layout and narrative flow for weeks, dabbling in other projects along the way to keep fresh, I finally got something with which I'm happy.
When we left our heroine (me), she had met Sara just outside the Library. Sara outed herself to Diana, and they agreed to go have a chat. 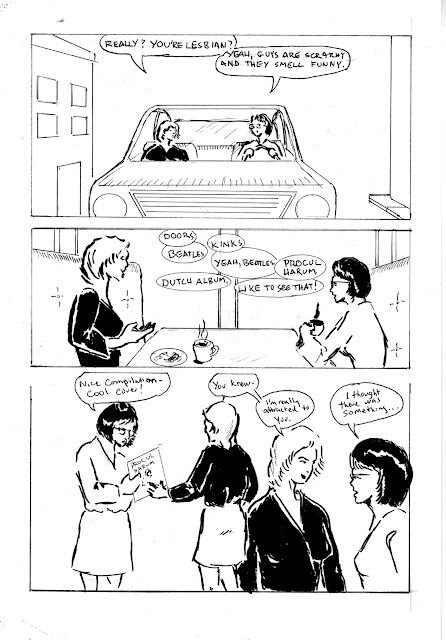 I kept this clean and did decent, slightly less sparse, backgrounds. It still reads a bit light, as regards heavy blacks for balance, but between Sara's hair and my shirt, I think- hope- there's enough. If I take time for revisions later, I might map some darks on tracing paper, just to see where I can push farther without killing the work.
Layout considerations: the three tier banner layout works fine.  The bottom tier, the open top panel with the abrupt shot reverse shot and jump to a tighter view, connected by my word balloon pointing to both of me- that works if you don't think too much about it. It takes the emphasis away from the album being discussed and puts it on the two of us. the lettering in that last panel is completely free hand- not even ruled guides. I just flew at it.
I wish I still had that particular Procul Harum album. It was a very cool cover indeed.
I'm reconsidering larger flow issues. I'm not sure why Delia's story came first in this large chapter, since I met her second. I may remedy that in the final.
This is exactly the way I remember this talk. I was much more of a jerk about Sara being lesbian, asking some rather asinine questions, mostly because I'd never met a trans lesbian before and didn't know how not to be stupid yet. Also because my attraction to her made me nervous.
My attractions still make me nervous. But I'd like to think I'm more graceful about it by now.
I was surprised to feel that attraction, but even with my being in another relationship at the time, I had no problem giving it voice. As will be shown more fully in the chapter on dating guys, I think that, despite occasional and sometimes powerful attractions, I always knew that wasn't who I really was/am. Sara's line here, "men are scratchy and smell funny" is pretty much my mantra on this topic now, and it's a line I gleefully stole from a Gay Comics Roberta Gregory story.
Again, the real Sara looks very little like this. She always had such incredible musical tastes and experiences. I loved it when our music overlapped. Her taste ran in somewhat different directions than mine. I shan't elaborate on that here.
Material used in this page:
Canson Recycled Bristol Board
Faber Castell brush tip markers
Straightedge, triangle, ellipse templates, Ames lettering guide, Magic Rub eraser
I'm on vacation for a bit, but as it's Inktober in a few days, I hope to be able to post anyway. I'm traveling, and as such, may not have time to do another page before going.
Live in hope, babies.
on September 27, 2017 No comments: