In the last few years, there's been a huge movement towards works of graphic history. Some, like John Lewis' documents of the Civil Rights movement, are primarily memoir. Others, like Derek McCullough's Stagger Lee, are research and speculative fiction. Works like Yossel, Joe Kubert's story of what his childhood might have been if his parents had not left Poland, are clearly fiction with historical trappings. The lines blur.
It also needs to be said that, with a few notable exceptions like Sgt. Rock and The Unknown Solider, I have little interest in most war comics. 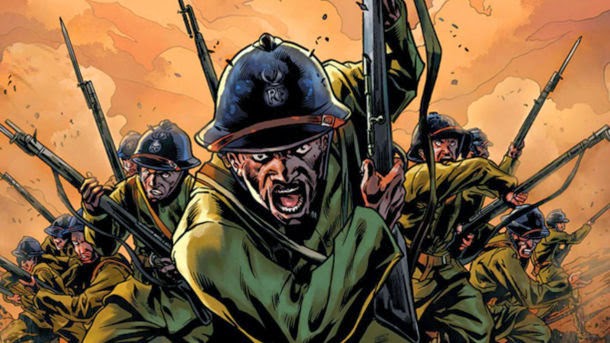 In this melange we get this year's Harlem Hellfighters by Max Brooks, with art by Caanan White.
A note on authorship: I much prefer co-credits to the isolated credits seen here. Brooks is given primary credit. White is credited as "illustrated by". A more equitable listing would be something to the effect of "by Max Brooks (writer) and Caanan White (illustrator)".  I dislike either creator taking a secondary role.
I had no interest in Brooks' earlier writings on zombies. Aside from the Simon Garth stories from Marvel in the 70s, Val Lewton's classic I Walked With A Zombie, and The Walking Dead (both the series and the comic), I could not care less about zombies. I'm not familiar with Caanan White's other significant work, Uber, but given the strength of the art here, I'll check it out. 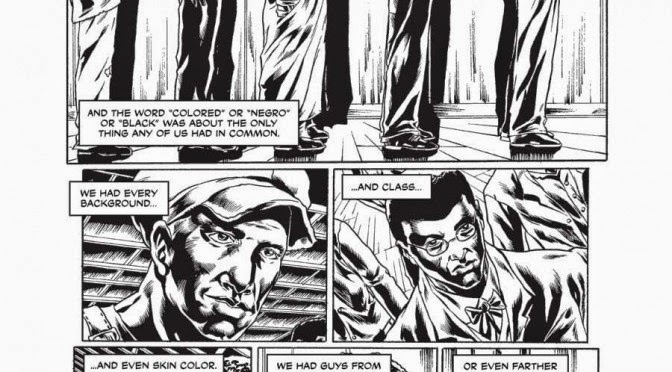 While the roles of blacks in WWII are more comprehensively documented, especially the Tuskegee Airmen,  the WWI fighters have not been as publicly recognized. Since 2014 is the centennial of The War to End All Wars, it's come back into the public eye.
As to this book, it engages the reader on every level. The writing is frank and unapologetic, presenting the racism of the 1910s (as opposed to the racism of every time since) without comment. The language used about blacks is harsh and presented without hedging. 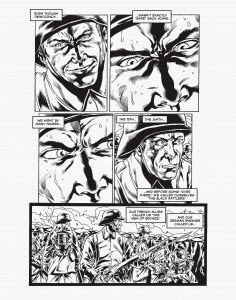 The war scenes contain the best writing and art. One of the biggest challenges in war comics is the battle scene, done here to perfection- just the right combination of action, scope and genuine humanity to keep it sympathetic.
But the revelation for me was the minor plot element on pages 28 -33. The material on jazz pioneer Major James Reese Europe was a real eye-opener, one which I embraced as a music historian. Maybe I'm out of my league calling myself such, since I've never encountered this figure in my readings on jazz history!
Even with the ultimate defeat implicit in the ending, as the Harlem Hellfighters return home to some of the worst treatment of blacks in American history, the book feels like a triumph. Possibly this is because they DID return home, after fighting for a country they loved, one that, needless to say, didn't always love them back.