Back in the art game! I decided to do Inktober, so I will be posting my ink sketches every day or so on Facebook and doing weekly compilations here.
For those not familiar, Inktober is self-explanatory. You do an ink piece every day in October.
We're only two days in, so a light week.
First up, a Star Trek pastiche- a quasi-Vulcan lady with overtones of Kes from Voyager. 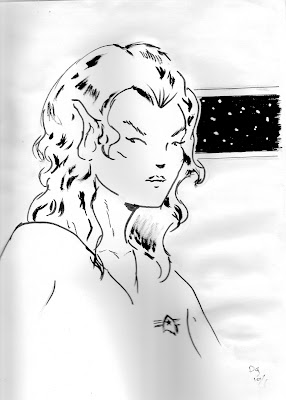 The light ink wash I did to set the character apart from the background a bit served primarily to wrinkle the paper and mess up the scan. I suppose I could have waited until tomorrow and scanned it on the good scanners at MCAD after teaching, but I was eager to post, so I'm letting the ugly stuff show a bit. Giving an allusion to setting with the star field window.
I've been enjoying Star Trek a great deal lately, but still haven't seen the latest film. From the friends I've talked to, it may be just as well, but as always, I'm trying to keep an open mind on it.
Materials on this one:

That was yesterday. Today was this. 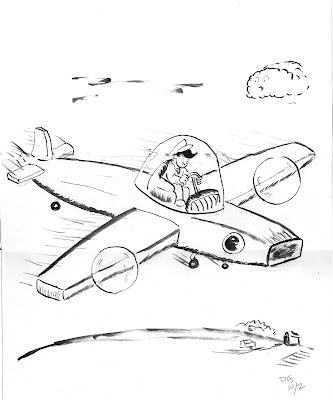 This one is a stylistic departure for me. This is a preliminary for a piece that's been tickling the back of my mind for a LONG time,  and I want to fully realize it before I comment on it in any depth. Yeah, it's a pastiche of a young Blackhawk, but I'm not saying any more about it right now, at least as far as content.
Materials used:
I do hope I can keep up with Inktober. I like it. It feels good to just do art again, for its own sake. The graphic memoir is important, but the content weighs on me, making it difficult to get anywhere. I understand why Stuck Rubber Baby and Fun Home each took years! I've not abandoned Sharp Invitations- far from it. Scripting for the Daddy's Song chapter has had a breakthrough, and my revisiting of the Curt story is coming better than its absence here would imply. Re-pacing it from the rough version proved elusive, since it was such a complex time. It's hard to clarify the elaborate without boring a reader, but I think the improvements to the script and pacing will prove worthwhile.
Next: either more Inktober, some Sharp Invitations, revisiting the Blackhawk thing, or a miscellany I have laying about.
on October 02, 2016 No comments: