After a rough couple days of writing deadlines and wrestling with money, I can get back to posting for a brief time.
The tie for the No. 3 spot is Marvel's Land of Oz.
I've been enjoying Marvel's Oz adaptations a great deal, not just because the writing of Oz scholar Eric Shanower is faithful to the source texts, but because Scottie Young's art manages the neat trick of being fresh and feeling at home with this book. Since the original novel was first published 107 years ago, that's no mean feat!

The story has new life in these adaptations. The duo has moved on to the third Oz book now, and I hope sales continue to warrant new adaptations through the 15 OZ books by Baum (including the short story collection Little Wizard Stories of Oz, and not including the Big Little Book The Laughing Dragon of Oz, written by Baum's son). 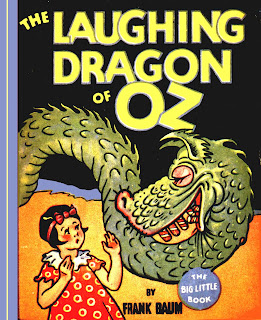 The writing on the Marvel Oz books is faithful not only in plot and tone, but in spirit. There are many thousands of people who love Oz because of the Judy Garland film (as do I, for reasons previously enumerated), but if those people have never read an Oz book, especially one by Baum, they really don't know Oz.
Sidebar: it needs to be said that the 1939 film is not without its problems. Those problems are skillfully enumerated by Peter David in his 1990 essay, which predates Gregory Maguire's Wicked by more than a decade. Interesting, as Maguire is building his narrative on some of the ideas in the David essay. Not to say he lifted the ideas. Far from it. Great minds often think on similar lines.
So what is the tone that eludes so many creators in adapting Oz?
Baum's stories are driven by a very sophisticated blend of wit, melancholy and pacing.
He refused to write down to children.
There have been hundreds, probably thousands, of Oz adaptations over the 11 decades since the first book. Many of these, building on the homilies in the 1939 film (which I do love, so much, despite my protestations here), have a cuteness bordering on simpering.
Again, a long post on Oz in comics is forthcoming sometime next month. Perhaps I'll do that as my birthday present to me.
Meanwhile, the book at hand.

The character designs are a nice cross between the heavy-line work of Denslow on the first book and the delicate pen work of the great Jon R. Neill on subsequent books (it should be noted in passing that Neill was an official author, or "royal historian", for seven Oz books following the Ruth Plumly Thompson series).
The pages flow cleanly and efficiently, as in this spread from issue 3. 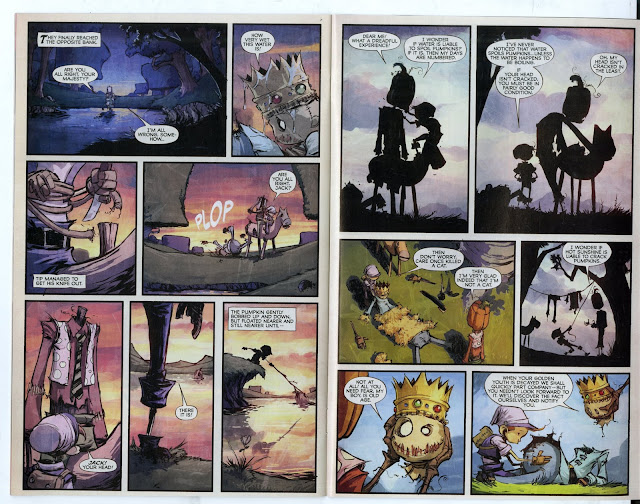 But that's what happens when a good artist is also a good writer.
Not to take anything away from Scottie Young, but Shanower's comic work has been top-notch since his debut on some Nexus material in the early 80s. I've followed his career through the Nexus work, several appearances in Gay Comics, the First comics Oz graphic novels, the wonderful Trojan war book Age of Bronze, and now this. He's never disappointed. He even wrote a couple very good Oz novels!
And the Marvel series does not shy away from the transgender aspect of the original novel, which is quite welcome in itself.
These are fresh, smart versions of stories over 100 years old. Marvel is doing the comics world a favor in publishing them. This was just about the only Marvel book I bought this year.
That's partially Marvel's own fault. Their storytelling has been uneven, but the big sticking point is the ads. For example, in Land of Oz No. 4, there are 8 pages of ads, not counting the inside front cover and both sides of the back cover. That's a quarter of this 32 page book, which sold for $3.99. And that's a skimpy ad count compared to some. Daredevil No. 50, a few years ago, was the worst offender in recent memory, with a 50/50 ad/editorial ratio! Every other page an ad? Come on now!
In fairness, Marvel has been producing lovely (if very thin) hardcovers of these Oz series shortly following the completion of the storyline. Listing at $29.99, and probably a lot less online, that's an OK deal. Single issue price is $24 for the run.
But why gouge the reader of traditional format comics (AKA floppies) like that? Of the 8 pages of ads, half are house ads or ads for Marvel-related projects. If they need to offset their single-issue printing revenue that badly, they're in trouble.
That aside, this series (along with its predecessor, the Wizard of Oz, and the current successor, Ozma of Oz) deserves accolades.
If I've piqued your interest in matters Oz, do yourself a favor and get back issues of the paperback magazine put out by Shanower and his partner David Maxine for six years, OzStory!