Today's entry in the countdown reminds me of John Wayne, but not in the way you might think.
Wayne had made iconic Westerns for decades, but his health was failing. In half-hearted recognition of his body of work, The Academy of Motion Picture Arts and Sciences awarded him an Oscar for his role in the original True Grit- a serviceable performance, but hardly on a par with his contributions to The Searchers, Red River or The Man Who Shot Liberty Valance.
So it is with today's entry. This year's collection of Scalped, You Gotta Sin to Get Saved, is not the best of the series to date. That would be 2009's The Gravel in Your Guts.
But since I just discovered this series in 2011, and this is the volume that came out this year, and since the series is winding down, so be it. The series deserves recognition, and now's the time. 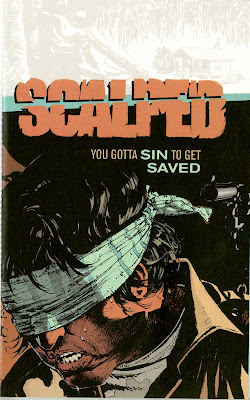 This is contemporary Western noir. The complex, gritty story revolves around an FBI double agent, Dashiell Red Horse, assigned to  break the corrupt tribal chief Red Crow, as the chief tries to open and run a casino, going perpetually deeper into a moral morass in the process. The series delves into family histories of the characters and plays fast and loose with real history, with Leonard Peltier and the Wounded Knee battle as recurring characters and back-story events.
I find the violence and language revolting, but at the same time compelling in this context. The possibility of redemption looms larger when the soul falls farther, as the title implies. 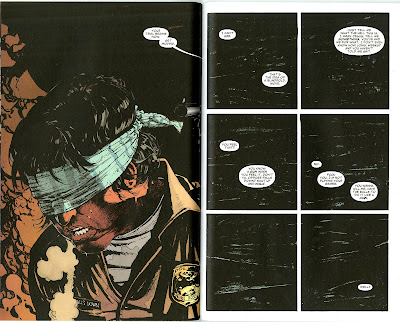 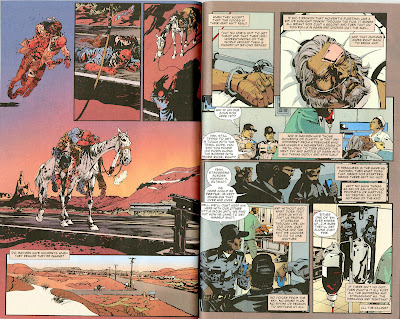 The definition of noir is complex, but I see it as having parallels with Agnes Nixon's classic definition of a soap opera: characters doing all the wrong things for what they see as all the right reasons.
The motivations here are complex, with plot turns worthy of Cornell Woolrich in places.
The story is tempered with every character's fervent attempt to comprehend the motivations and morality (or lack thereof) of their actions, often committed without much forethought.
And the problematic issue of Native spirituality is handled rather deftly.
It needs to be said that opinion is highly divided on Scalped, as indicated in this thoughtful but impassioned exchange with writer Jason Aaron.
I've not paid much attention to Aaron's other work, Punisher Max, The Incredible Hulk and Wolverine and the X-Men, but I'll give them a chance based on this work, though they're not my usual cuppa.
Like 100 Bullets before it, this is noir with a challenging twist, and noir that does not use that twist as a crutch to hold up the story, but as a supplement to help move the story forward.
Next: No. 7: something not so elementary.
on January 16, 2012 No comments: