Only four left after this one! Another page I rather like. 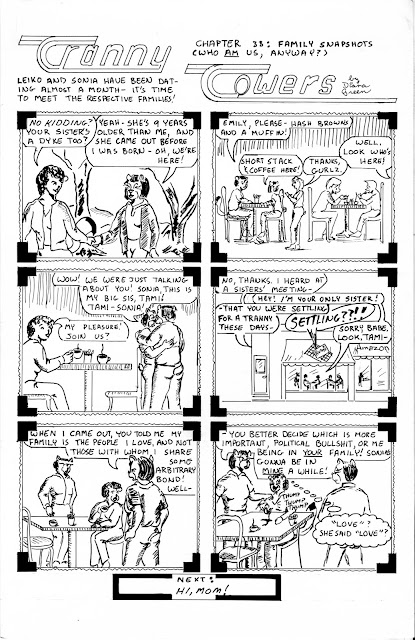 Notes:
Could have pushed the darks farther in the "open background" panels, 4 5 and 6.
I had more plans for Leiko's sister that were never realized. Think about it. She came out before she was 9, in the late 1960s- gutsy kid! She's been through a thing or two. That doesn't excuse her tactlessness, but it does explain it to some extent.
The chapter title comes from a Peter Gabriel song on the "melt" album.
The cafe' where they're eating, Ruby's, was a fixture for me and Jenny. At Pride this year, I glanced across Loring Park and had a pleasant/sad moment looking at the space, occupied by a totally different business now. Amazon Bookstore, which was next door, has since moved a couple times and finally closed for good earlier this year.
This is another page which was chopped up and printed in irregular tiers without my knowledge.
Prior to doing the following episode, I was informed that the strip would most likely be cancelled. I altered the plot lines of the remaining strips accordingly.
Next: it burns....
on July 15, 2012 No comments: