The world of comics can be rather pessimistic at times. Worlds destroyed, brutality and amorality (especially in the recent Punisher books, which turn vengeance into self-parody), and, as Scott McCloud observes in ZOT!, justice should be more than a punch in the mouth.
Thank the Diety for the personal memoir.
A few years ago, Brian Feis, whose line style is quite similar to Tom Batuik's work on Funky Winkerbean, gave us the quiet revelations of the award- winning Mom's Cancer.
Now he's back, with this summer's Whatever Happened to the World of Tomorrow? Hereafter I wil use the acronym WHTTWOT to save my fingers. 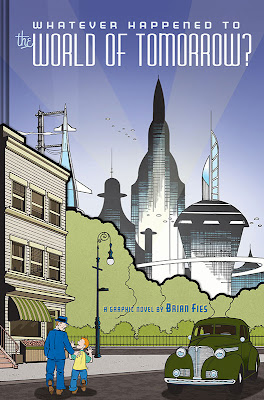 It should be noted that the front bottom scenery is a die-cut cardstock sort of half a dustjacket. The effect, reminiscent of Chris Ware's Acme Library in design, is subtle and eloquent.

The book, a proper graphic novel rather than a collection of floppies, as are so many mislabeled GNs, begins with a lad and his dad attending the 1939 New York World's Fair.

While at the fair, both are astounded by the promise of the future it offers. 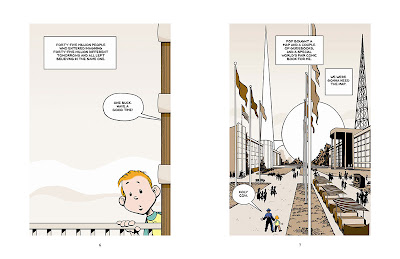 The boy embraces the  streamlined possibilities of the future promised in 1939. 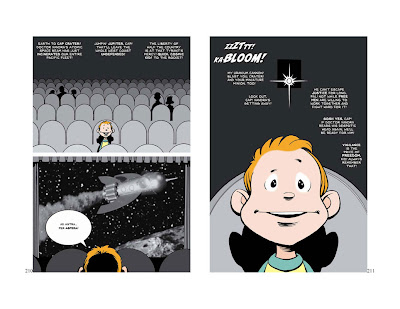 He's given a comic book while attending. Using a surprisingly effective metafiction (I loathe the overuse of that term but it applies here), the comic reappears at various points in WHTTWOT. Its evolution echoes not only that of comics themselves but that of the society in which they, and the boy, grow. The comics contained in the larger narrative are printed on a yellowed newsprint stock simulating period books, a nice touch! 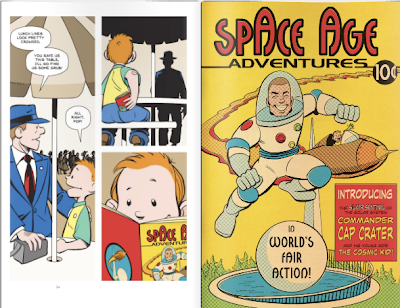 The boy and the man remain fascinated with technology, especially as it relates to flight and the space program, even when it fails to live up to its anticipated promise, and offers new possibilities instead. As the world grows around them, we see the father and son respond to that growth and perceive their own place in the world shifting. 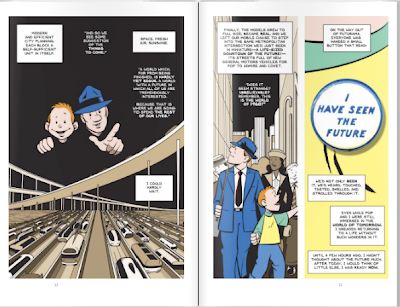 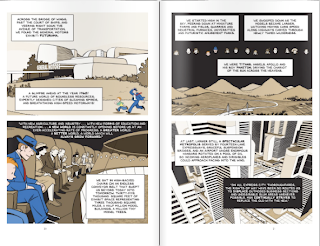 As the two age, they do not lose their hope, despite the technological utopia's measured successes.

When the subsequent generation- the daughter of the son who saw the proposed wonders in 1939- is seen living on the moon, her father and grandfather are there to share in the fulfillment of their dreams and to nurture the birth of hers.

It's a little gosh-wow in spots, and the inevitable teenage clash between father and son over rock music plays out very softly, as some light-hearted jibes rather than full-blown rebellion. But the key to the book is the idea that even if things don't turn out as planned, optimism is always a possibility, even a desirable goal. Beyond that, the father and son trust one another to face whatever comes together.

The story has its holes. Our heroes revel in the docking of the Apollo and Soyuz missions, but no mention is given to the Challenger disaster.

It should be noted that the creator, Brian Fies, will be Artist-in-residence at the Charles Schulz Museum on Saturday, Jan. 9.

If there's a TPB of this by the time it's needed, I hope to use WHTTWOT? as a text the next time I teach Graphic Novel.