Original Art Sundays No. 232: The Next Sharp Invitation, p. 4

It never lets up, does it? Wasted half a day trying (unsuccessfully) to get rid of annoying adware on my Mac. Very irritating.
Well, back to the work!
I'm quite moved by the death of Prince, and am developing a story on the subject. It will have to wait a bit as the deadline for the draft of Sharp Invitations looms large.
Here's the next page of the current story. 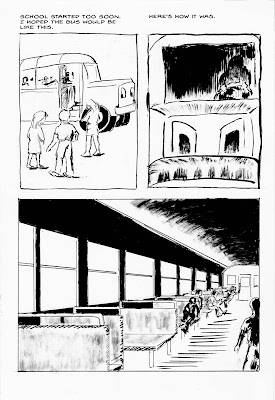 Again, lettering digitally, using the Colleen Doran typeface from Comicraft. The rest is hand work.
This page went through several iterations before I settled on this one. Finding the right pacing and mood was very challenging! I toyed with over-the-top stuff like the bus devouring kids, which I toned down to that second panel. While it's hardly subtle, I like the idea of the smiling bus followed immediately by the "demon bus". We had the shell of a school bus on our land up north, right at the edge of the woods near the creek (which I always pronounced "crick"- hey, when it's your creek, you can pronounce it however you like). I always think about that rusty ghostly shell when I think of my time on the school bus.
The borders in the first two panels are free hand over ruled pencil lines. The third panel has a ruled ink border as well, implying a more grave tone.
There's a great deal of rather obvious (to my mind, at least) foreshadowing on this page. I shan't give away the next page, but I'd be very surprised if anyone was surprised by its contents.
I've rendered buses several times- for some reason, they show up in a fair number of my works. I usually don't spend a lot of time on backgrounds, but inspired by Scott McCloud's suggestion that they be considered environments rather than backdrops, I cribbed this bus layout from a page in the B & W run of ZOT! 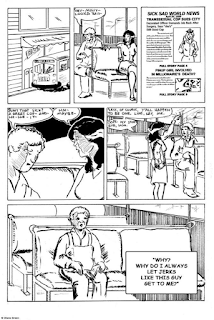 Here's another page that uses the bus, from an earlier attempt at a graphic novel on trans issues. This was done shortly after Tranny Towers ended, and was originally intended to tell Athena's story more fully, though I did away with the funny animal motif. Pretty good bus work here too! Maybe I should do a whole story set on a bus some time...
Ahem. Back to the issue at hand.
I have exactly three weeks to complete this project, including a small print run. I will complete the work in roughs, and do as many finishes as time permits before going to press.
Let's get back to it!
on April 24, 2016 No comments:

This story is now done, but I'm still posting a page at a time until I get them all out there. Why give away the farm? 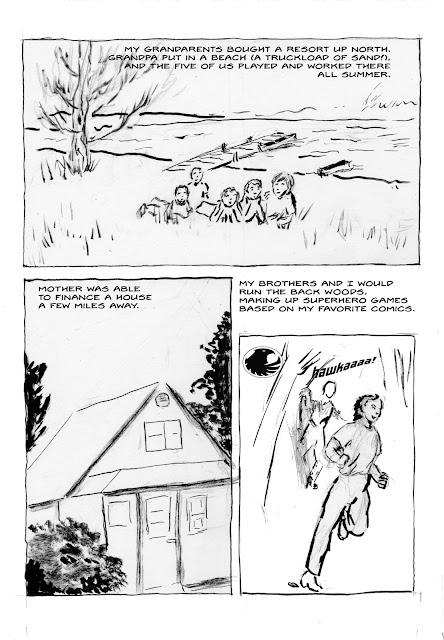 Once again, enjoying the local color of the paper as picked up by the scanner.
This page went through several iterations. I tried the resort sign for the first panel, and what is now the last panel was originally larger and on the opposite side of the page.
The level of detail could be higher in places, notably in the woodsy scene in the last panel. I was torn between fleshing out the detail and keeping the energy. Once I have the grant requirements fulfilled, I will go back and take more time on each page.
This page also offers the challenge of being an exposition-heavy page. So much of this work is thoughtful and solitary, it's a real challenge to break up the text!
Right now, my primary concern is getting a completed version of the work done and printed by May 15!
Again, digital lettering using ComicCraft's Colleen Doran typeface. I find it has much more character than the one I had previously used, Clean Cut Kid.
The hawk logo in panel three references Blackhawk, of course, though I think it's actually the Hawkman logo. It comes from a typeface called Hall of Heroes that is just superhero logos! 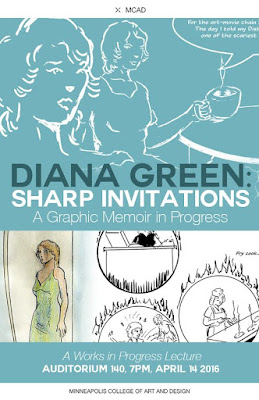 I presented this work last Thursday at MCAD as a work in progress. Attendance was scant, about a dozen people, all fairly receptive. I was honored and humbled to present the work. The meaning and scope of what I'm doing becomes more clear by the day.
Next: page 4.
on April 19, 2016 No comments:

Didn't post last week, due to time limitations. I'm taking vacation from the FT job this week to work on the graphic memoir. As usual, it's going slower than I hoped, but faster than I expected! with my final deadline four weeks away, I have to retain pace and optimism!
A few weeks back, I was getting frustrated at being stuck on this project, and suddenly thought about Speigelman's MAUS. That amazing work, all done with ballpoint pen on regular printing paper.
I was at work that night. I took a #2 pen, a cheap wooden ruler, and a piece of paper from the printer, and dashed this out in about 20 minutes. 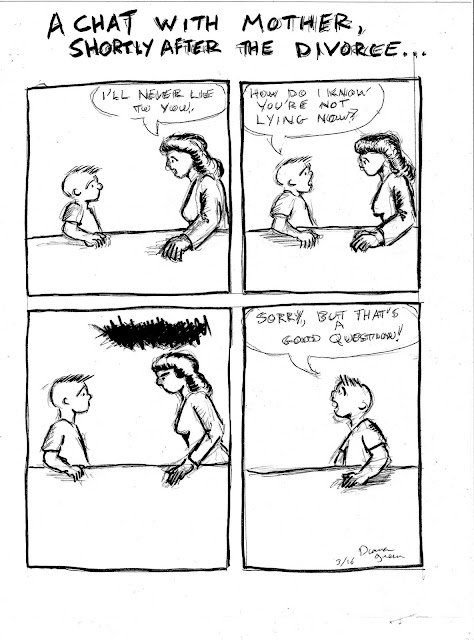 Well, it was a good question!
I kept thinking about Calvin & Hobbes as I drew this one.  Going for that energy, that freedom of a precise yet loose line.
Despite its crudity, I think it makes the book. This book has a serious, almost grave tone to it, and I need to break that up a bit.
When I got the page home, I went over it with a brush-tip marker to give the lines a tad more weight. I've also cleaned up the text a bit more than this image shows since doing the scan.
I currently have several new pages of this work (I've lost track), and I'm presenting it as a Work In Progress at MCAD this Thursday!
Next: more Sharp Invitations.
on April 11, 2016 No comments: