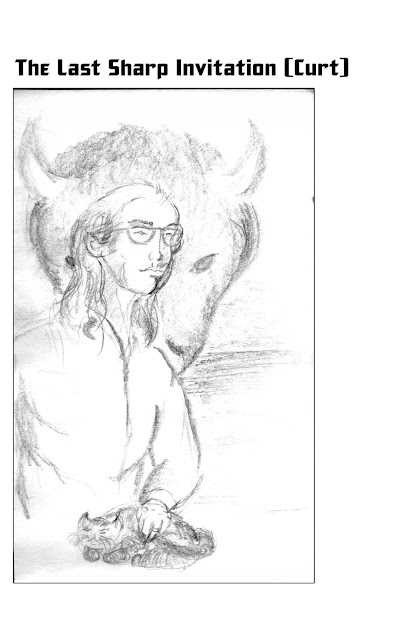 Original Art Sundays No. 235: The Next Sharp Invitation, p. 7

The books are printed, the grant is submitted. Funds reimbursement expected soon.
Until then, the work goes on, as we know it should.
I solicited feedback from some folks at Spring Con this weekend, and am waiting for their responses.
The last page of the current story: 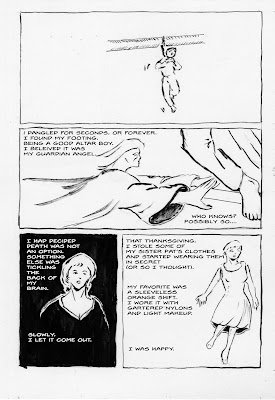 I'm very satisfied with this page.
I could have gone nuts rendering the angelic figure in Panel Two, but sometimes simple is better.
There are almost no backgrounds on this whole page. For the most part, that's the way I wanted this one. I was keen for the sense of floating- first being held aloft by the twine, then feeling free in the dress.
I find the freehand borders here particularly effective.
In upcoming stories, I have an even higher emotional content. This is problematic. It's a balancing act between the integrity of the work and how much the reader can, or chooses to, take. How responsible is the creator for the reader's reactions? It's easy to say one has no culpability. But we try for responses to our work. Who's to blame if we succeed?
No easy answers here. As my sister Pat once told me, I don't have the answers, but I'm starting to learn the questions.
The printed version of the work to date jumps over a BIG part of my life, going from this period to adulthood. Those stories will be completed in some form by the time of the faculty art show in the fall, in which parts of this work will be exhibited.
Next: a new Sharp Invitations story.
As promised, I am re-posting the whole story below. 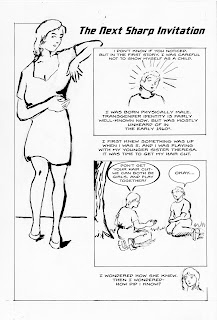 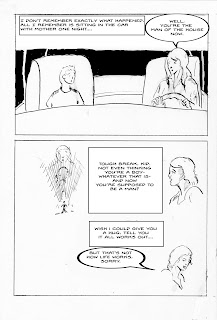 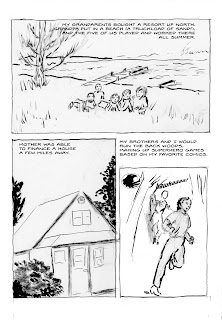 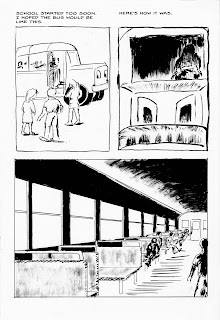 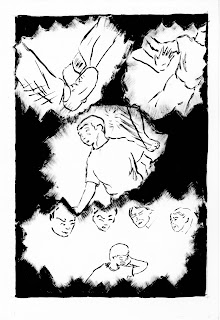 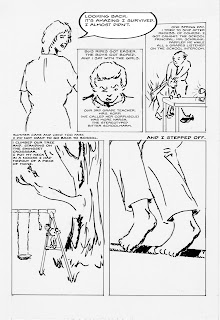 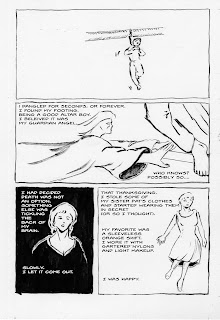 And to the wire...
I have 6 - 10 more pages to add to the Sharp Invitations rough, which must go to press by Friday to fulfill grant requirements. I'm also working FT this week, completing my current teaching contract and grading. I'm taking time this weekend for a friend's birthday and for Spring Con. Then the dust settles a bit as I cut back to *only* one job for a while!
Here is the next page of the current story. 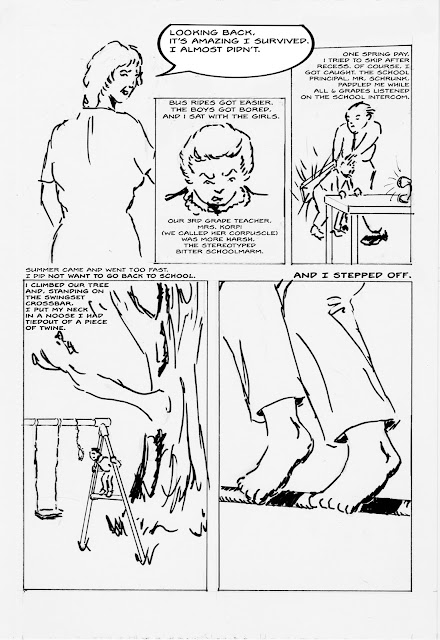 This was a very difficult page, emotionally. That has been the biggest challenge in doing this work.
I didn't tell anyone in my family I had done this when I was a kid.
When I presented this story as part of my work in progress presentation back in April, an audience member asked if I had told my family I was telling these stories. I replied that I had told them I was doing this work and that some of it might be uncomfortable. They replied that all I needed to do was tell the truth.
Structurally, this page works fairly well. I'm not 100% satisfied with the facial expression in the open panel that starts the page. It's a tad too snarly, not quite the right emotion. I might also make the third panel, the paddling, larger to increase its emotional impact.
The back foot in the last panel is a little iffy.
In general, the page needs more heavy blacks. But I'm regaining my confidence with inks as opposed to brush markers. In that respect at least, this work has been very successful. I'm working both brush and crowquill on this one, and markers for borders.
This may end up being two pages, if I can work it out in contrast to the following page.
This is one of the few pages with tightly defined panel borders. I wanted a very deliberate and serious sense on this page. As much as I like my standard  free hand borders, they're the wrong mood here.
One way or another, I will have a completed draft of this work printed by this time next week.
Same time next week for the conclusion of this particular story!

Two weeks today until the grant deadline! It's going to be close! I will have SOMETHING completed and printed, but certainly not the final version. Given that I hope to be working with an editor on this down the line, that's probably for the best.
Here, then, is the next page of the current story.
When we left our hapless lad, he had just gotten on the bus. 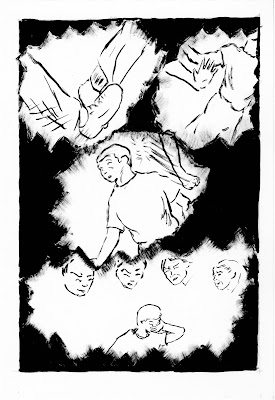 Again, I worked through several versions of this page. A couple were dialogue-heavy, but it soon became clear that wordless was the way to go with this one.
Backgrounds: sparse to nonexistent.
The space was established in the previous page and I wanted a sense of openness, a complete lack of control implied by a lack of place.
The floating jeering heads in the bottom tier are a summary of the way I felt and a reuse of a fairly effective panel from Speedy Recovery No. 1.
I would have liked the dry brush edges to be more pronounced in the final version. In re-reading some of my texts on pencils and inks, I've rekindled my fondness for, if not my mastery of, drybrush. I may give this page a fourth (fifth? sixth? I've lost track) go before the final version of the book sees print.
The borders were hard-ruled in pencil and then rendered free-hand in ink.
This is not one incident. I was tormented ("bullied" does not do it justice) by the kids on that bus for four years. The frequency and vehemence decreased, but the threat was always there. That's why I was so proud to lobby on MN's anti-bullying legislation a couple years back.
A rather bitter turn of events: there was a recent failed attempt by more conservative members of the MN legislature to introduce anti-trans bathroom use legislation this year. One of the self-righteous MN legislators talked about how businesses were "being bullied" into letting trans citizens use the bathroom of their appropriate gender. Yet another example of the abuser claiming to be the victim, I suppose.
Luckily, I have a light week at the FT job this week, and the semester is almost over, so the demands on my time from teaching at MCAD are somewhat reduced. All I need to do is summon the emotional strength to write about these painful and sometimes shameful events in my past.
And I must get it done in two weeks.
Yeah, that's all.
The upside is that I will have ample blogging material for the foreseeable future!
Next week: page 6.
on May 01, 2016 No comments: