Back in the saddle with Original Art Sundays! Starting the rotation afresh rather than entering the quagmire of rescheduling.
My apologies to the faithful.
In raking my studio this week, I found a reproduction of a commission I did in the 1990s. The band Gnidrolog asked me to do a poster for a series of festival appearances they had planned as part of the tour for their comeback album, GNOSIS (scroll down a bit at the link for an album review).
That poster is presented here. 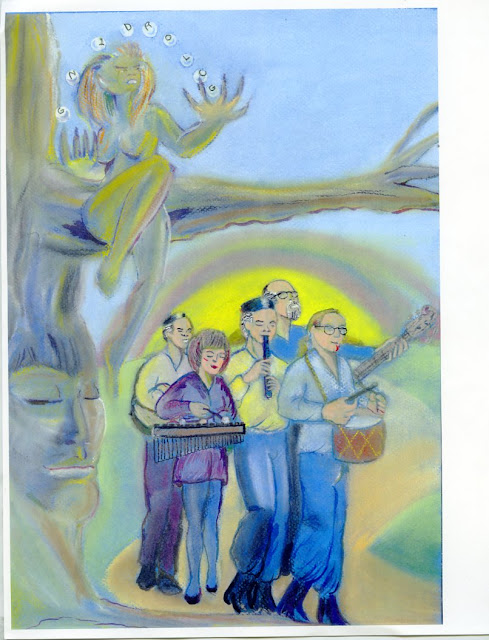 The original, and the poster itself, were 11" x 17", and it sold fairly well. The media  are pastel and Doc Martin's dyes, with a bit of Winsor & Newton colored ink here and there.
What works: the sultry sprite in the tree juggling the band name, the face of the founding member in the tree trunk.
What doesn't work: the placement of the band members! No way a group could march in that tight a formation with any grace, at least not prog-rock musicians in the throes of performance!
Ah well. I was mostly happy, the client was happy, and seeing it again has renewed my interest in pastels.
Next: a Tranny Towers page.
on June 26, 2011 No comments: