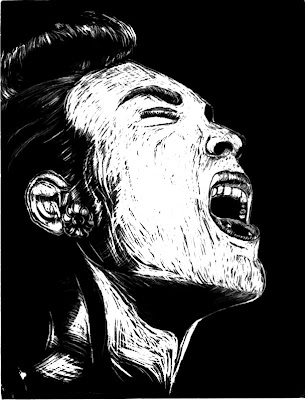 Time to finally start posting my own work.
I'll be running original art every Sunday, God willing and the crick don't rise, as my late friend Kate Collins used to say.
This piece is ancient. This is a scratchboard of Billie Holiday (well, duh!) that I did circa 1994 as a birthday present for an ungrateful witch who later tried (and failed) to blackmail State Rep. Keith Ellison over alleged improprieties.
Guess it's just as well that she "forgot" the present.
In spite of its arcane history, I've always been rather pleased with this piece. Despite my love of chairoscuro, I've never been so good at scratchboard- I screw myself up on the inversion thing, drawing out the light areas. But this one I was always happy with.
on July 05, 2009 No comments:

Why they Call her Omaha.... 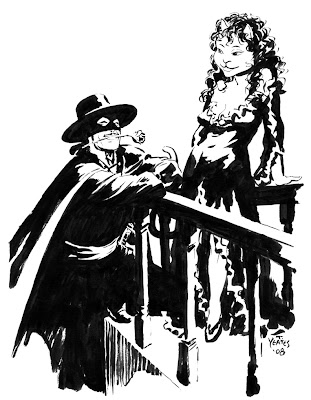 AS some of my readers (if any there be) may already know, I served an apprenticeship with Reed Waller on Omaha the Cat Dancer during my tech school commercial art training.
The internship lasted about 6 months, and is often the case, I got more out of it than my sensei did. And not what I expected to learn.
I learned quite a bit about art and comic art, but learned much more about human nature by being around Reed and his then-partner Kate Worley.
Reed and I continued our association beyond the professional over the years, sometimes with good results, other times not so good. I'm completely out of contact with both Reed and Jim Vance these days. Seems to be the way we all want it, but still a bit sad. Just a byproduct of being human, I guess.
Which is ultimately what Omaha is about- being human.
As the story is currently in its final stages in Sizzle, an otherwise largely worthless magazine full of stories people with impossible anatomy engaging in loveless sex acts, I am reading the final chapters as they unfold.
The pieces are coming together.
It's starting to look like Shelley ordered a hit on Joanne, but the shooter got Bonner by mistake. But why did she keep the gun? And what's the connection to those City Hall bigwigs who were talking clandestinely about the hit a couple chapters back?
Who's behind the A Block Molotov Cocktail?
Will Omaha get her acting career going? Will she marry Chuck? Will Hector live?
Remember, the whole story is being told in first person past tense, from Panel One if BIzarre Sex #9 on.
I'm sure my speculations are way off base. I've believed I knew exactly what was going on in this story so many times in the past, and been pretty much dead wrong every time.
Well, whether I'm right or wrong, it's still a good story.
I love a good story.
The above drawing of Zorro and Omaha was a commission from the master Tom Yeates, and is put out on the Web with his permission.
on July 05, 2009 No comments: