One of the advantages of moving is also one of its drawbacks. You have to go through all your stuff.
Again and again.
In so doing, I found some comic pages I'd forgotten about, like this one. 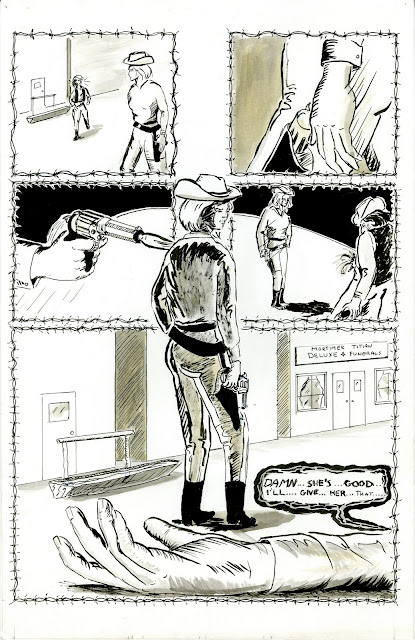 This page has a few things to recommend it, and a few issues.
I like the barbed wire borders. I've had a fascination with the look of barbed wire since it was used as a plot device in an episode of the brilliant, neglected Western series Branded in the mid-1960s. Those who are into the Coen Brothers may recall a reference to this series in The Big Lebowski.
I also like the warm grays. I scanned this as a color piece, since the grayscale preview cooled out the warm grays.
What I don't like:
The layout is ambiguous in a few ways. First, the viewer needs more of a frame of reference to get that it's her hand, not his, drawing the gun in Panel Two. Second, the angle of the shot in Panel Three makes it appear that she's shooting herself. Changing that to a POV a la The Great Train Robbery would have made it more clear, I think.
Finally, the direction of the primary light source is unclear in the final panel. Cast shadows from the watering trough and her opponent's hand at rest imply light coming from behind her and to her left, but the edge lighting on her right side is inconsistent with that notion.
The last niggling detail I like on this page is the name on the undertaker's sign: Mortimer Titian. Think about it for a minute.
I have an experimental page from years ago put aside for next week, and an eight-page story, complete, for the week after. Hang in there, faithful readers. I want to tell new stories as soon as possible!
on September 04, 2011 No comments: