Taking this week off work to complete more of the graphic memoir and prepare for the upcoming MCAD faculty art show. Gotta love Paid Time Off- what a concept!
In light of that, I finally scanned the most recent page, which has been done for a while now. This page was included in (very) rough version in the printing of the first draft in May. 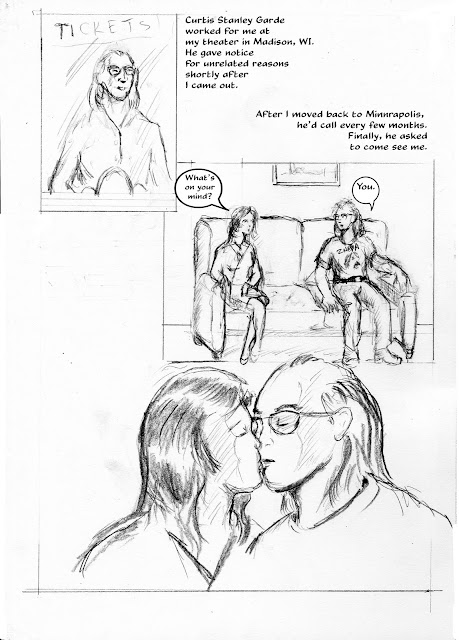 I'm pretty happy with this. Since the first page of this story is a pencil page, I let that serve as the template for the whole story.
The scan came out very well. As I've discussed in the past, the issue with scanning pencils is getting decent dark areas without picking up unwelcome artifacts. If you push your black point too far, the scanner does indeed darken the pencils, but it also picks up every invisible smudge on the page!
Lettering in Photoshop, using Comic craft's Clean Cut Kid, my favorite typeface for comic book body copy. Still using their Zap word balloons too. The shapes are a bit limited, but sufficient for my immediate purposes. If necessary, I'll do some digging and find a greater variety. I can always hand-render too. While this is working reasonably well, I take the comments of my friend Kim Matthews very seriously, and she contends that tightly rendered type is out of place on my looser art. However, since this is a more finished version of the page, I think it serves well, or at least better.
This part of the story is emotionally challenging, in some ways more than the rest. When I screwed up something in my life before I came out, I could always rationalize that it was because I wasn't being my "authentic self", whatever that is. But after coming out, you don't have that excuse, or at least you think you're not supposed to. But as will be discussed later in the book, there's more than one step, however big that step may be, in becoming authentic.
Just for comparison, here's the original rough for this page. 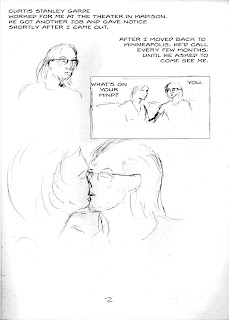 Layout was loosened up a bit, and the addition of the ticket booth gives the page a bit more depth. I think the kiss works in both, but the final version is much clearer. It also shows that despite people somehow seeing him as physically small, Curt was just over 6' tall and had decent musculature!
In preparation for the show, I'm adding a few (ideally all the rest, but that may be overly ambitious within the time frame) chapters to the book. Those will probably be in fairly rough form, akin to what is presented here screen right. I've been thinking about publishers, but it's premature to talk about that in depth.
My reading has turned back to queer comics. I just got my Kickstarter of the Alphabet anthology from Prism, and am enjoying it a great deal. Such works inspire me to be a larger part of that world again. I've felt damned by faint praise from the queer comics community, whatever that is, and would like to be a more accepted part of it. I hope this work serves that end, as well as the larger end of getting the story out there.
Next: more Sharp Invitations, sooner than later.