I'm rather proud of this page. I'll tell you about it in a minute, when I'm done crying.
I was all set to do the next page in the Curt saga. But I had some talks with friends, both trans and cis, that took me back to the early days of transition and the end of my marriage. Many of my trans friends have had relationships that survived the process of them becoming themselves. I am happy they are so blessed, and know (suspect) that theirs is not an easy road either. Much as Linda and I loved each other, the kindest thing we could have done for each other when I came out was to part ways.
But it sure didn't seem like it at the time. Not to either of us.
I could not get this out of my head. This had to be the next page I did. 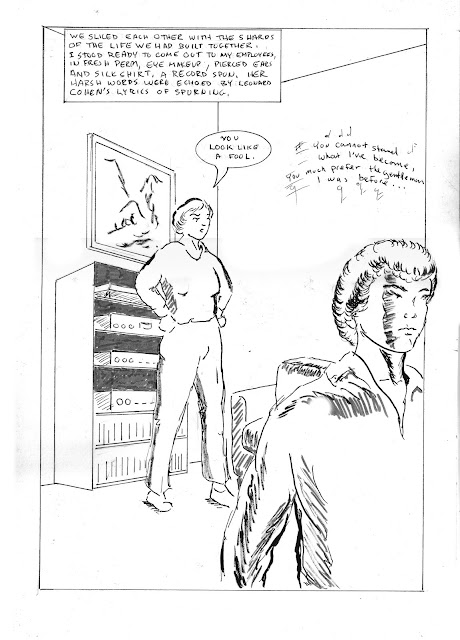 I like writing on this a lot. It hurts like hell, but I think it's solid writing.
It sums up the desperation and bitterness we both felt as our life together careened to its inevitable conclusion.
I honestly don't remember if that song (There Is A War, from Leonard Cohen's third album, New Skin for the Old Ceremony) was playing in reality as she said that, but it certainly echoed in my head and in my heart right then. The irony and bitterness of the line was so precise, so cutting.
"You cannot stand what I've become, you much prefer the gentleman I was before."
Well, yeah.
She did.
Somehow I don't think this is quite what Leonard had in mind, but once you've considered it that way, there's no other way to hear it.
I had betrayed her by being myself, and she betrayed me by being betrayed.
In fairness, while she did say that line, she said it with much more kindness than I've shown here. And she said it in the response to the fatal, desperate question, "how do I look?"
This page does something I've been trying to avoid. It shows me as an adult male. While the reality of that past is inevitable and must be in this book, I don't want to see myself that way, let alone share that with anyone who knows me now. Inevitable as it is, it feels like I'm betraying myself to do these particular pages.
But truth is capricious. It's also elusive. Even in this, I'm going to put myself in the most flattering light possible, even when I'm engaged in the most dishonorable acts, like taking someone's husband away, as I did here.
There's so much more to the story of Linda and me. And dear readers, please don't paint her as a villain from this page. She's a complex and loving person who only did right by me, as you'll learn when the rest of the story is told.
Production notes: backgrounds continue to vex me, but in a very different way. I did a very nice background/environment for this page, but much of the detail was obscured by the placement of the figures. The page could use more heavy blacks, but it serves as is. I wanted to use the layout to show distance between us, even in the same room. I also wanted to show my emotional rigidity at the time. I was just a few months on hormones, and would cry at the drop of a pin (as opposed to my present stoic and stable emotional state, of course). I felt like I had to  be in complete control, and the more things fell apart, the more I felt a failure if I didn't maintain composure.
Tools used on this page:
Photoshop (update 2018)
Canson recycled Bristol  board
Straightedge, triangle, T-square
Alvin flexible S curve
lead holder and No. 4 soft lead
Iyota .06 fine line marker
Dr. Martin's Black Star Walnut India Ink
Crow quill pen
Princeton No. 4 synthetic round brush
Faber Castell 40% gray brush marker
Magic rub erase
Next: either back to the Curt story or a revisiting of Tranny Towers.