Still trying to catch up from a couple days' illness. Only two behind, so three tomorrow would do it if I can manage it.
My lists tend to be dominated by older works and revivals. This is not to slight new work. I'll add any work that I think makes the cut, regardless of age. But there are so many great newer works by established creators, it would be wrong to neglect them. I've toyed with the idea of doing a separate list of older and newer creators, but drawing the line becomes arbitrary.
Today's offering is a delight.
I've written in the past of my admiration for the art, writing and professionalism of Colleen Doran. Like many, I was first exposed to her work on A Distant Soil as a backup feature in Elfquest, before the Pinis gave the story its own title. I thought it quite good even then, though those issues hardly stand up to the standard she's since set.
As a case in point, this is from the first issue of the current run. 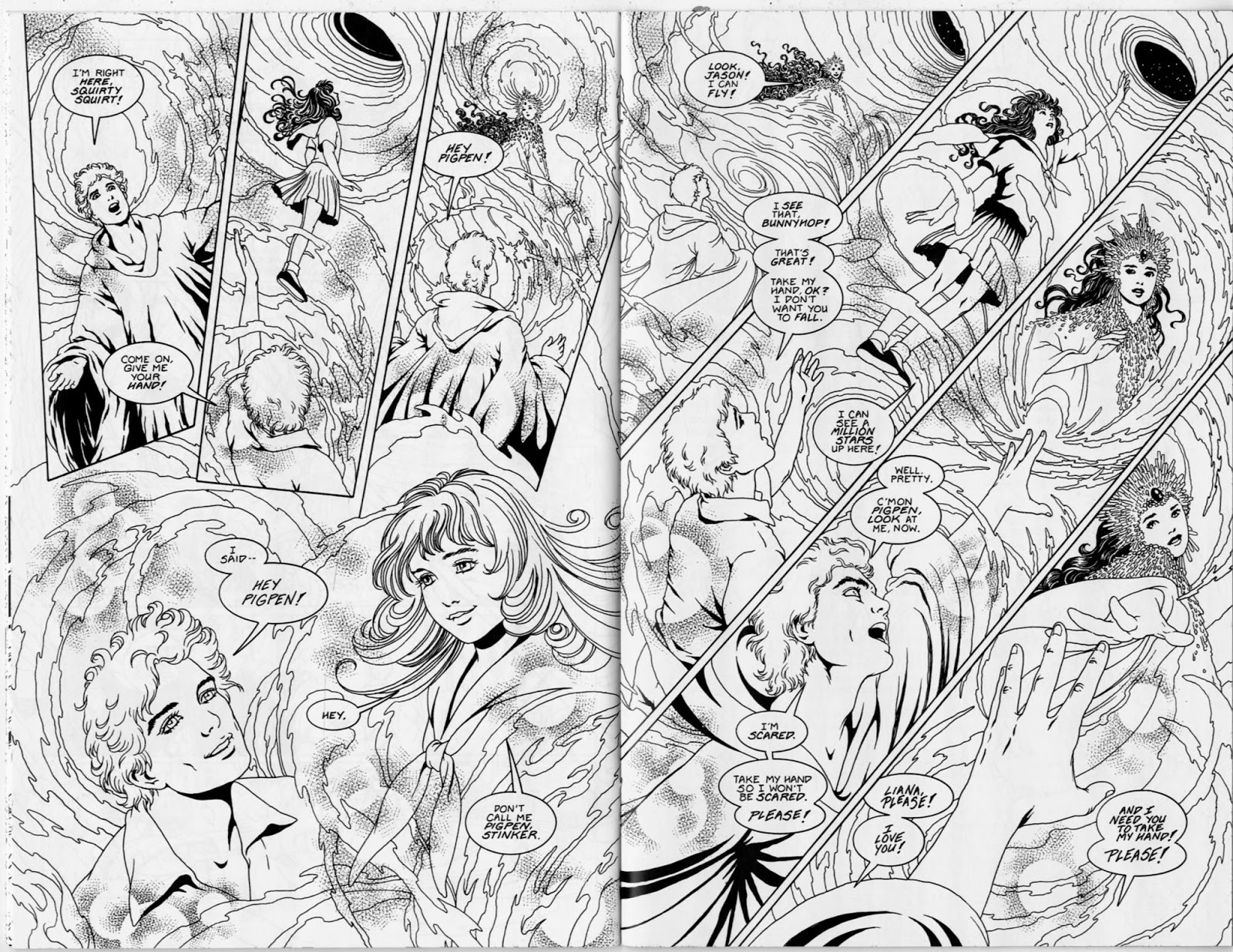 After seeing a self-published run from Aria Press, followed by a run at Image Comics, the title went on hiatus for some years, mostly due to Doran's other commitments. This year, it resurfaced, promising to complete its SF/fantasy storyline at long last.


The book retains its strongest elements: tight if often labyrinthine plotting (that's good, in case you're unsure), consistently strong and empathetic characters (even the villains, of which there are plenty), precise and ornate drawing, and tons of action.
All appears lost for our heroes and the rebel forces they lead. But all is never as it seems. My favorite character, Dmer, has proven to be much more complex than I had originally seen.
I'm deliberately talking in generalities to avoid spoilers. This is one story you really must fully appreciate on your own.
And luckily, you can. Doran has undertaken the dual projects of completing the story and creating a series of remastered collections of the work. As her blog is linked here, it's easy enough to keep up with her progress by the old click of a button.
And it's worthwhile to do so. Doran's insights on the process and the business of comics are a master class in themselves. She spends at least as much effort on marketing as she does on the work, or so it seems from the outside. I've purchased art from her in the past, and circumstances permitting, will again.
And she does both admirably, thank you very much. With canny success, she's cross-marketed to the digital market, and used original art sales and auctions quite successfully to continue promotion of her work. I can well imagine her last words being the same as those of Tezuka: "for the love of God, let me keep working!"
While I'm a couple issues behind on this as well (again, pesky finances), I have noted that the plot has reached the point at which all hell breaks loose. Lots of action with dire consequences for all concerned. Doran's characterization is a perfect embodiment of Robert McKee's three levels of conflict: inner, personal (based in relationships) and social (the character's conflicts with society as a whole, including the larger implications of the character's actions). Every move made by every character incorporates all three of these levels. I don't think this is a deliberate construction on Doran's part, so much as it is a reflection of her understanding of the things that make people tick. 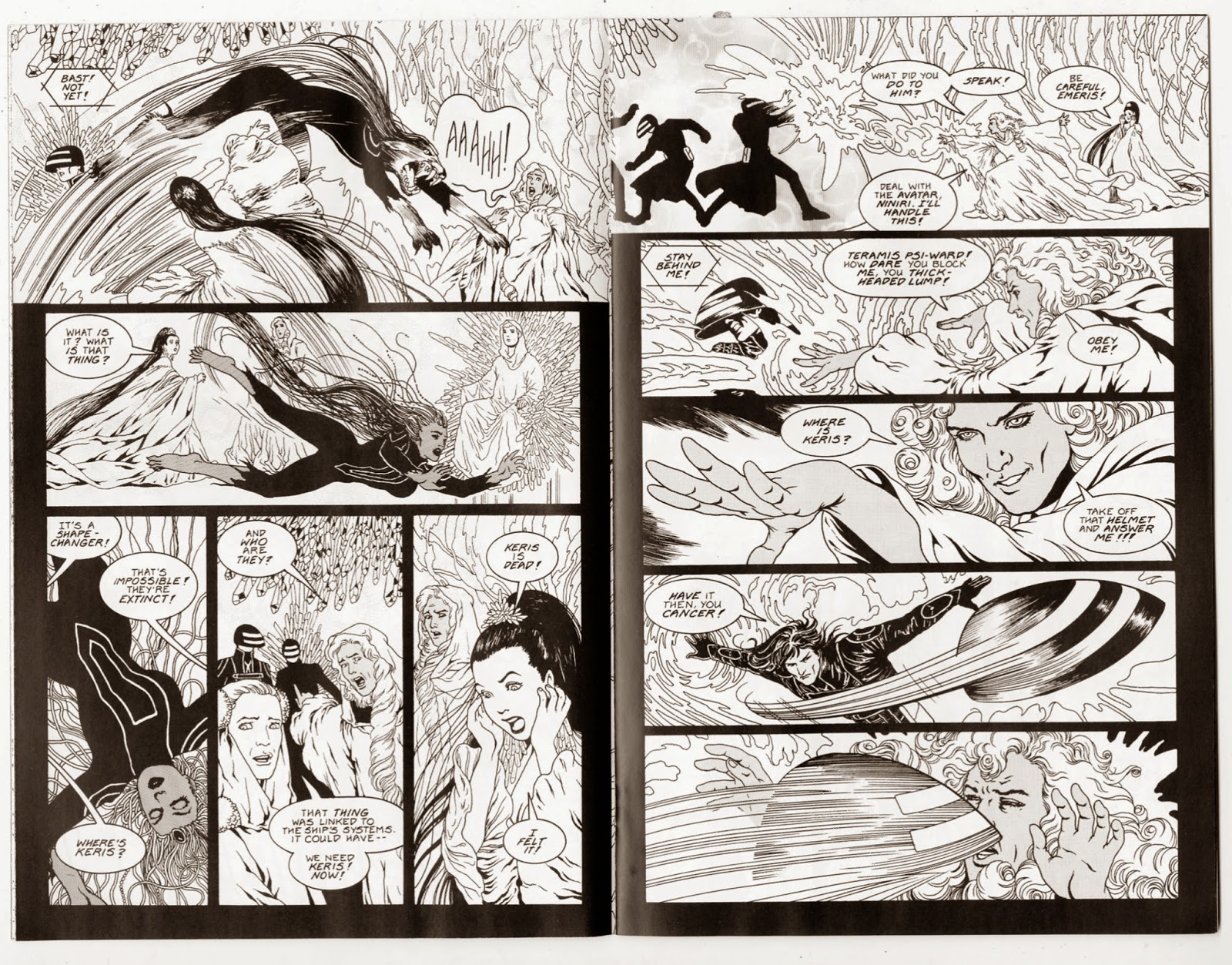 All that aside, this meets my primary criteria for a great comic. It's a very engaging read. There's a genuine excitement to opening every issue!
A Distant Soil always has been and it's only improved through the years. Now, as it winds towards its denouement, Doran is at the top of her craft.
Next: Best Comics No. 11, offering more space adventures, but with sea hags.