Much time spent prepping for comic book history class (does the fall semester really start in one week? Wow!).
So I thought I'd post some stuff that's been on my mind for a bit, material I planned to post last week.
Here are the first two continuity based episodes of Tranny Towers. 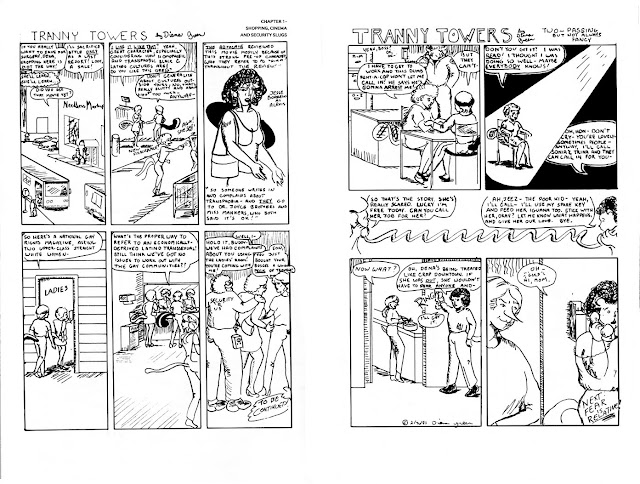 Image presented as originally printed, aside from redrawn Photoshop borders and the title type of the first strip being re-lettered digitally.
As you read these, bear in mind that each strip was originally presented as 1/4 page on a fairly standard magazine size page. Until I got the hang of dialogue placement and pacing, those aspects of the early strips were, well, not stellar.
Once again, please click to see the image at full size.
I had such ambitions around this strip! I had thought I'd set the queer comic strip world on fire with a funny animal transsexual strip. I had also hoped to draw on my experiences as an intern on Omaha The Cat Dancer, to bring the sensibilities of Kate Worley's wit and humanity to bear. The other queer-related comics that greatly influenced me, the work of Alison Bechdel and Howard Cruse, figure in with my attempts at subtle wit. Both their blogs are linked elsewhere on this page, but I've provided embedded links as well for your clicking convenience!
Next week: back to A Private Myth!
on August 15, 2010 No comments: