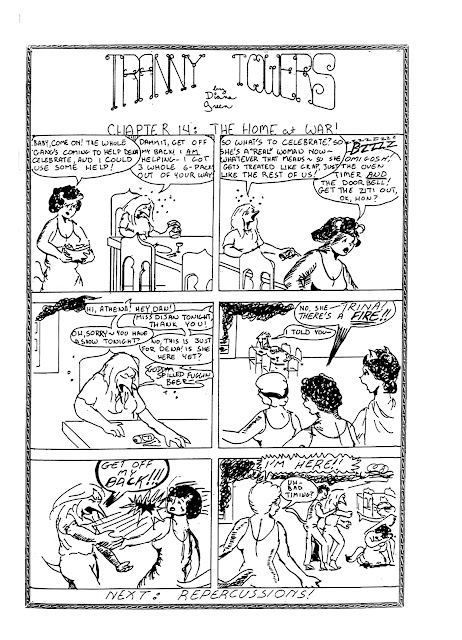 This page gave me fits.
First, I worked it slightly oversize, so I had to scan it in tiers for printing.
It didn't work.
For the life of me, I could NOT get the press tape borders to align in the scans!
Then there was the attempted visual device in the banner. I was trying for an opening wrought iron gate (I'm fascinated by wrought iron), but without extra frame of reference, like laying a roadway under it, it just reads as some pretty scaled text.  The scaling was done by hand using that old tool, the vanishing point, not in Photoshop.
In panel 5, there was a dumb problem to be fixed. I was ready to go to press, when I realized that Sonia's head was going the wrong way in response to the backhanded slap. This realization came a few hours before deadline time. So hurry, redraw the head and mortise it in, and still make the deadline!
That panel could also use more weight in terms of spotted blacks.
Finally, while I like sparse backgrounds, there's a little too much omitted here. The space of their apartment was established in a previous chapter, the one with the Mother, so referring back to it a bit more would have improved continuity.
There are some very nice things about this page. The classic six panel layout is a proven winner for advancing narrative, and identifies more with action stories than its 8-panel counterpart, which is usually associated with comedy and funny animal stories.
It's also action driven. A lot of my work is dialogue driven, and this gave me the chance to stretch out a bit. Like the "hands" page in an earlier chapter, it's a way to make me face a kind of work I've not excelled at in the past.
This was an emotionally wrenching page in other ways. I was less than two years out of an abusive relationship at this point, and this page was part of my facing that. I believed at the time that it was dishonest to have your personal life show up in your art. I now think that it's inevitable. The trick is to have the art come first, and let the personal stuff show up in whatever form it does.
Next week: Surrealist Cowgirls!
on March 13, 2011 No comments: