In 1989, Denis Kitchen began publishing the first major work of a relatively unknown writer, James Vance. Working with artist Dan Burr, he created a miniseries later collected under its title, Kings in Disguise. The story of a lad in search of his father during the Depression and the ragtag cadre of hoboes (the term is an abbreviation of "homeward bound") who help 12-year-old Freddie Bloch survive, Kings in Disguise touched on every aspect of the human condition in 1930s America.
24 years later, the creative team reunited for a sequel, On the Ropes. A reinterpretation of Vance's stage play (as was Kings), On the Ropes picks up some years down the line in Freddie's life. 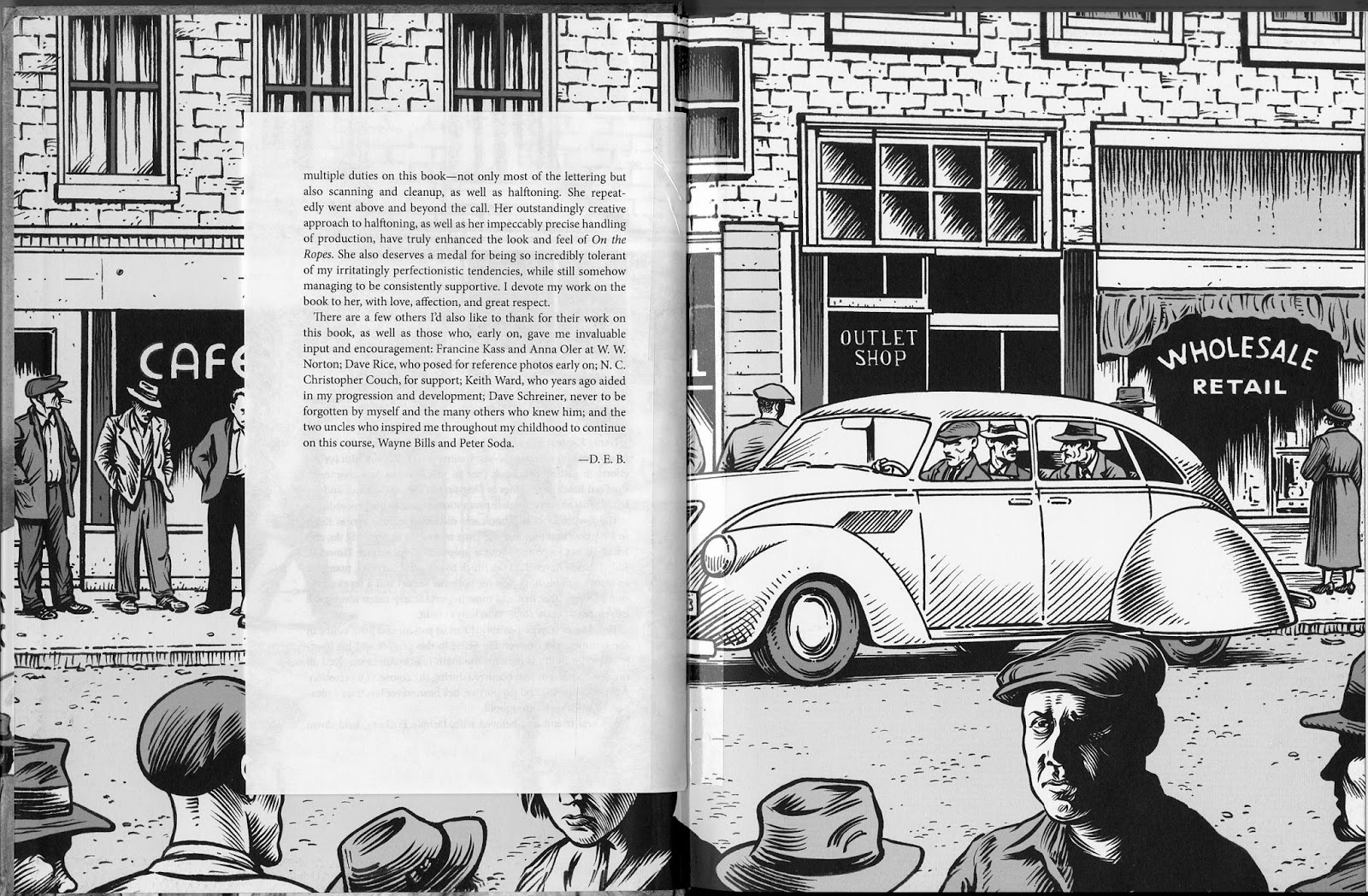 At this point, Freddie is an assistant in a rather macabre act, part of a WPA funded touring sideshow. His boss's act is nothing more than putting a noose around his neck, pulling the trap on the gallows and surviving. 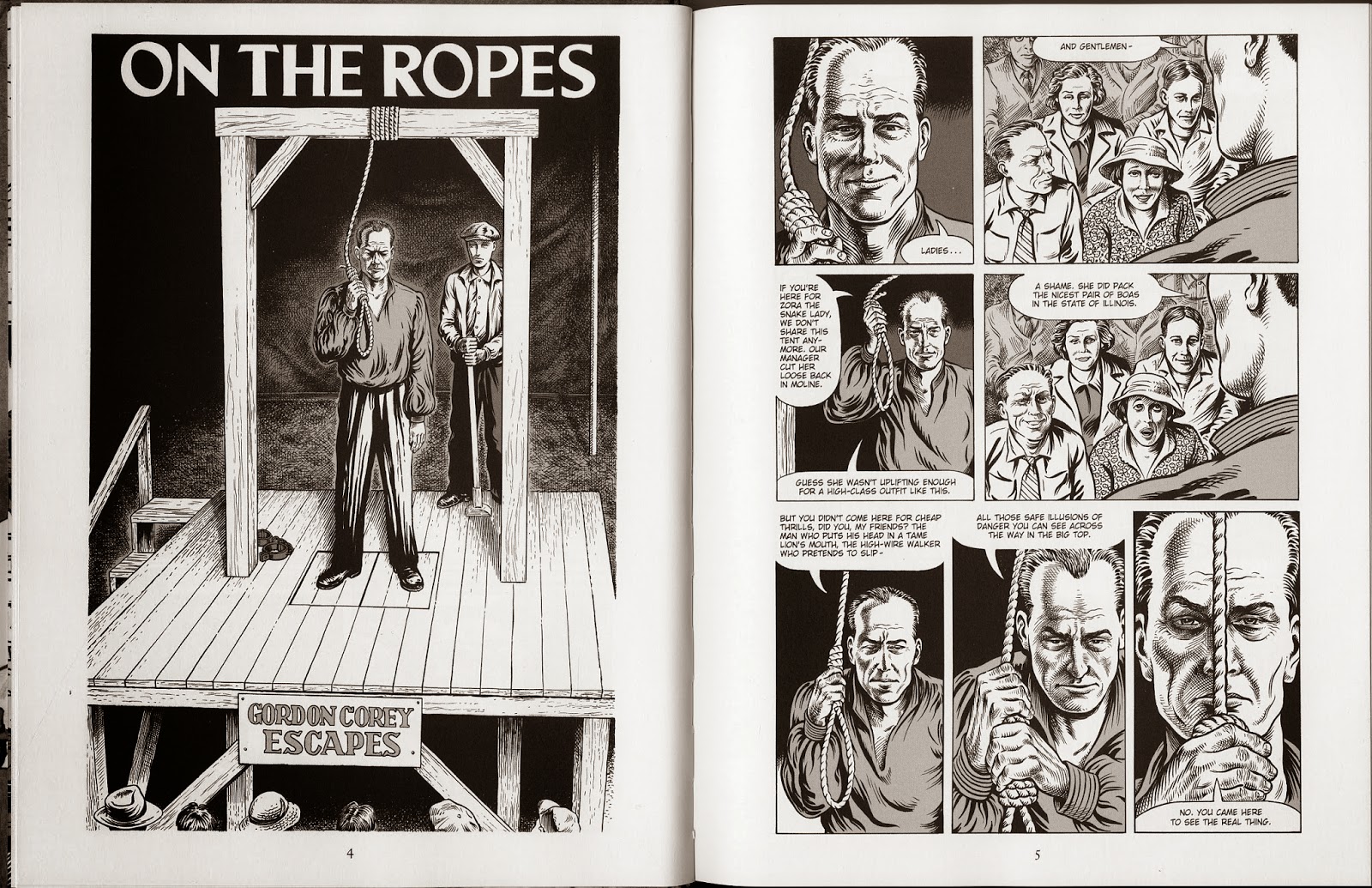 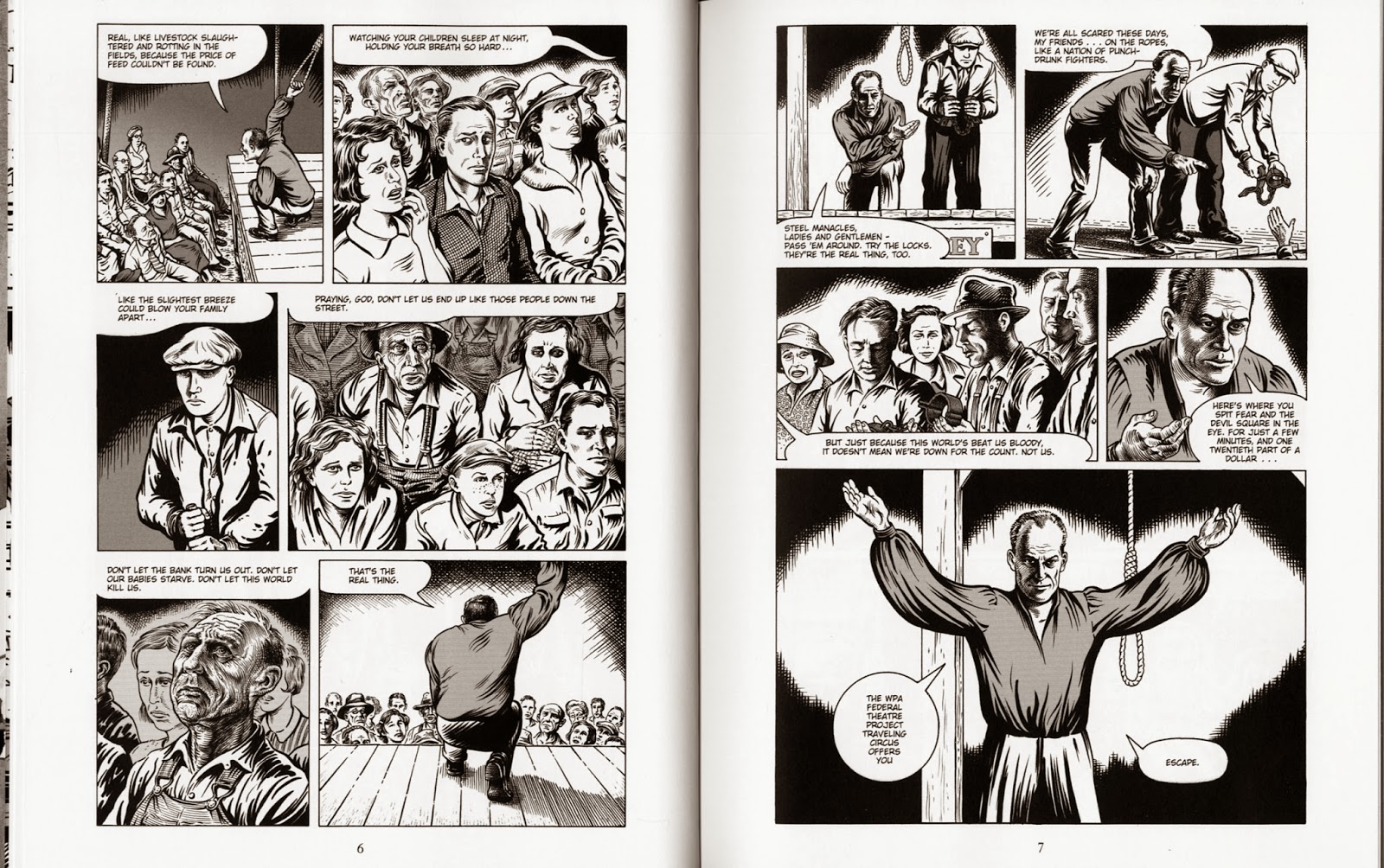 The grim humor of mocking death is not lost on Freddie, who has lost his leg to a train in between stories. After surviving union busting, near starvation and encounters with a crazy coot who MIGHT be Jesse James in the first book, he just slips and loses his leg. Life's a funny old dog sometimes. 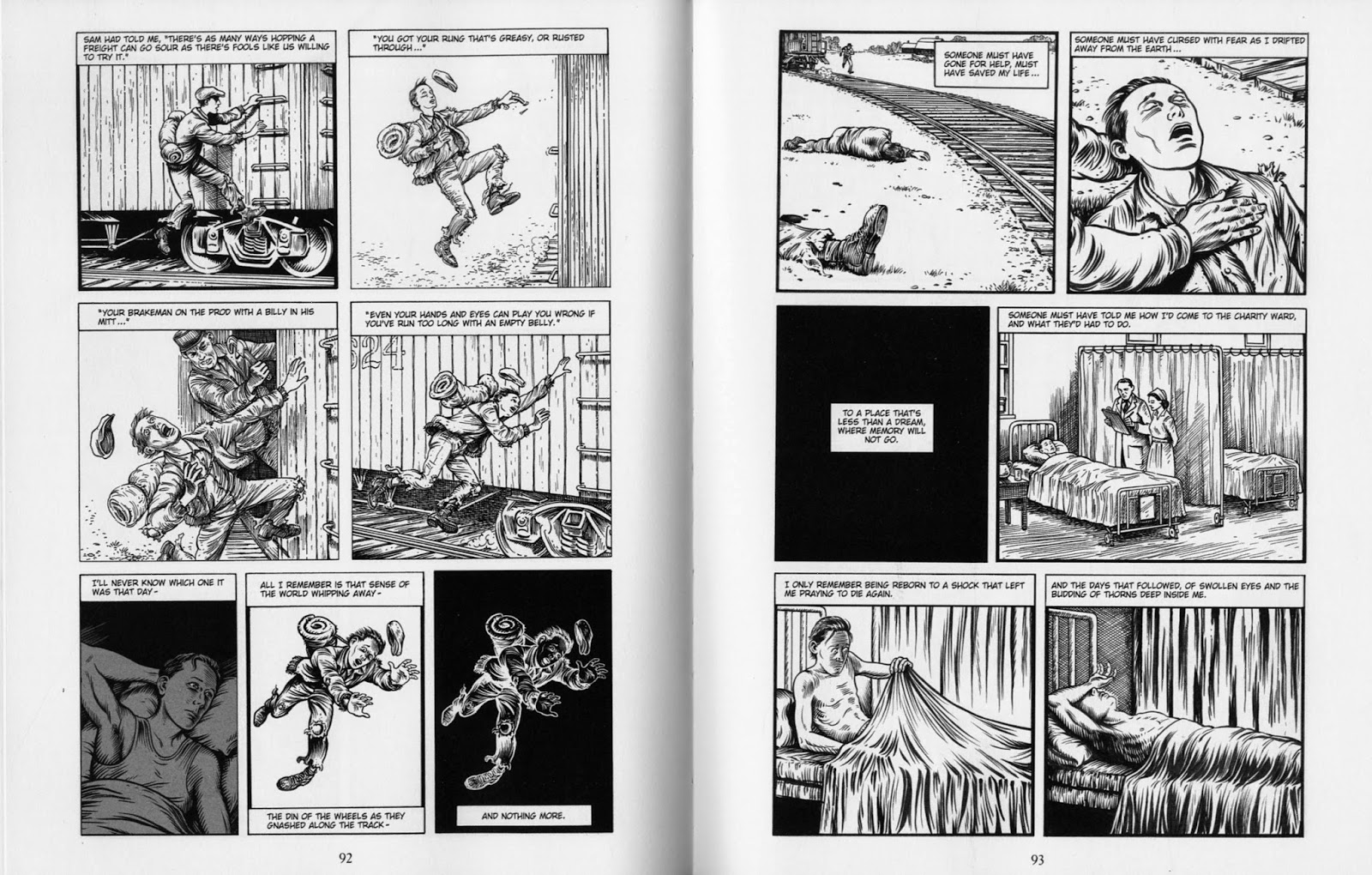 As Freddie tries to understand his boss Gordon Corey, he's drawn back into the world of unions. Union busters are hunting Corey as Freddie is elsewhere, being swept up in picketing, pamphleteering and bittersweet one-way romance. 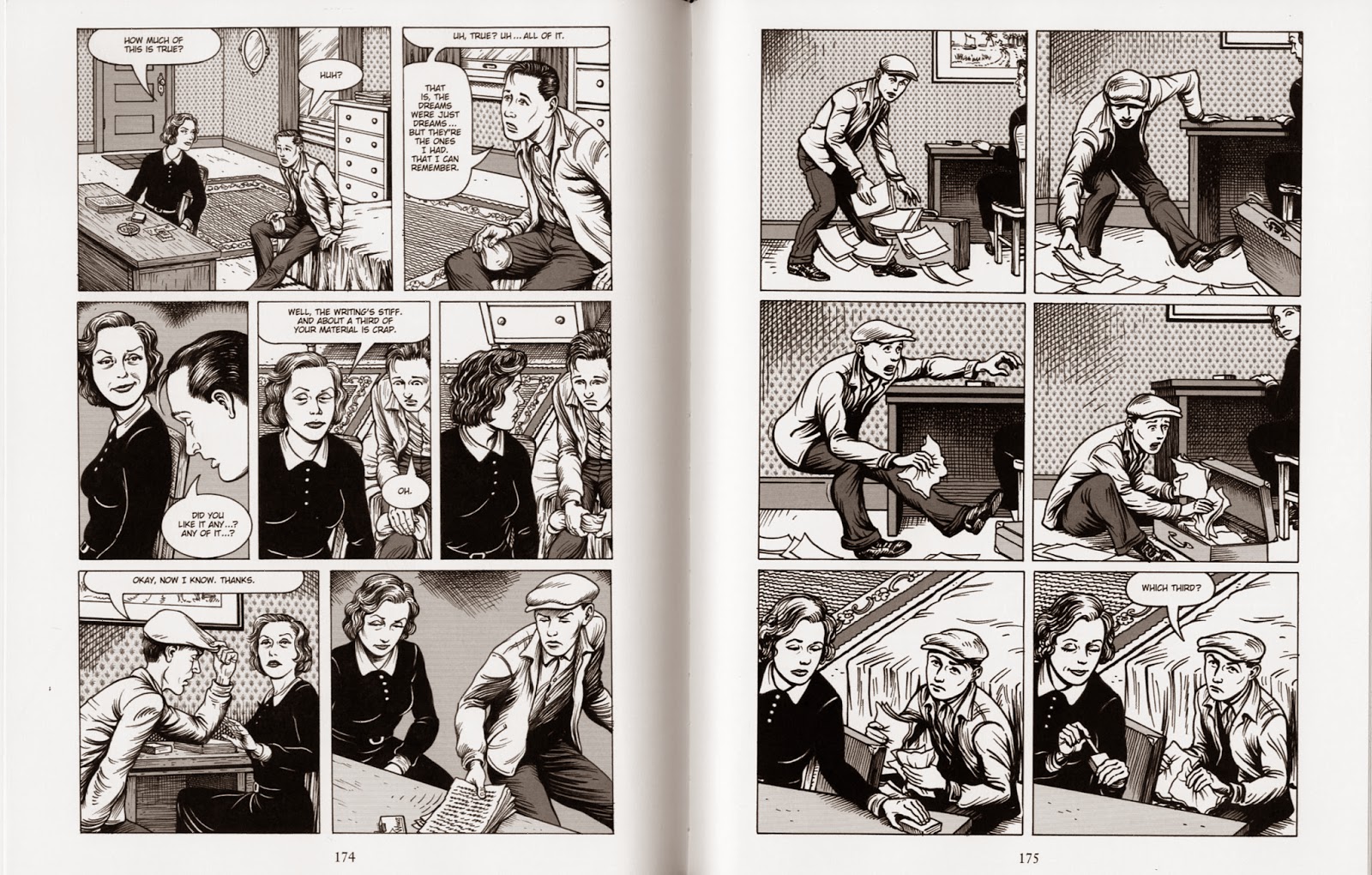 The anti-union thugs pursuing Corey, the mysteries of his past, and Freddie's divided loyalties all collide, as they must. 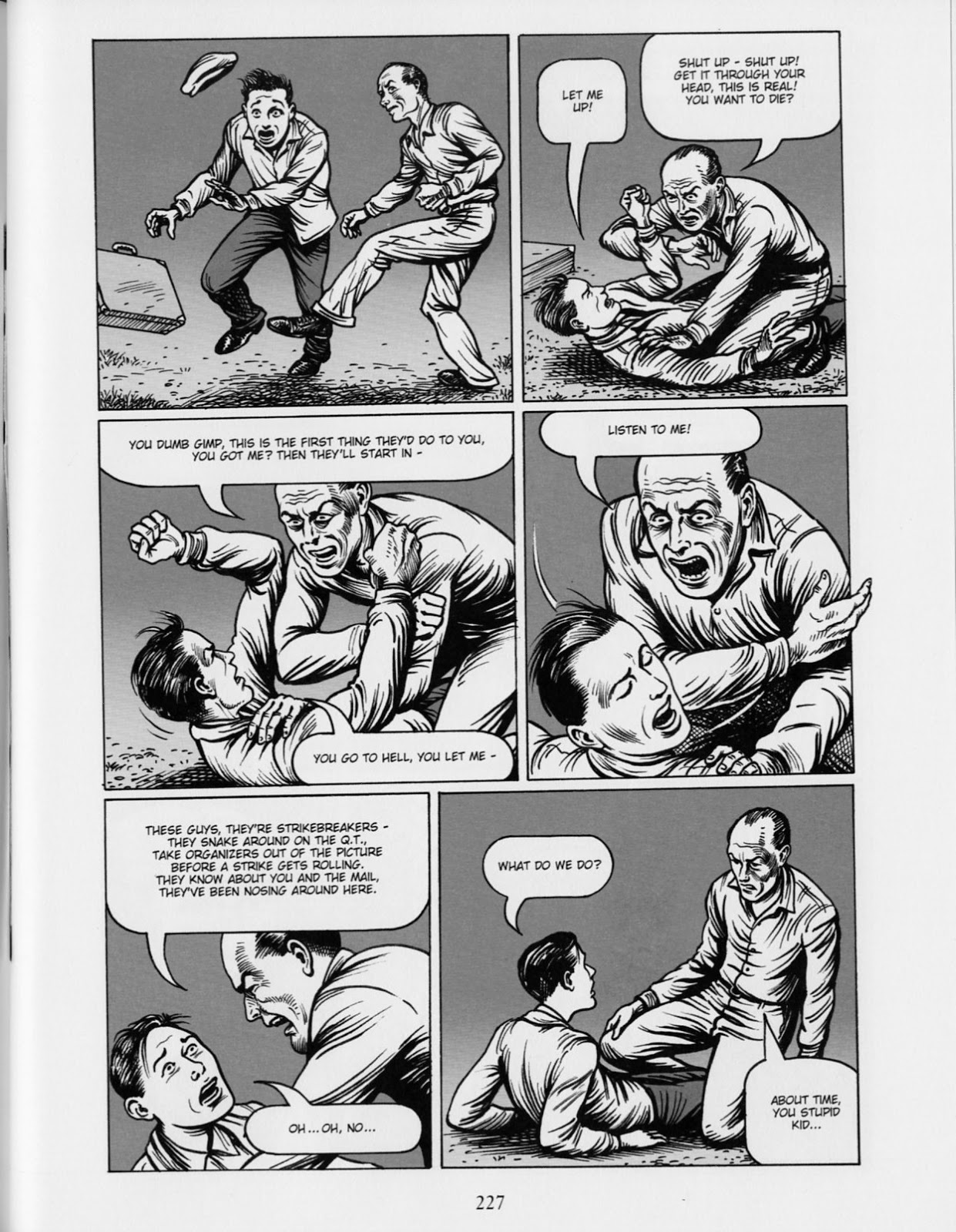 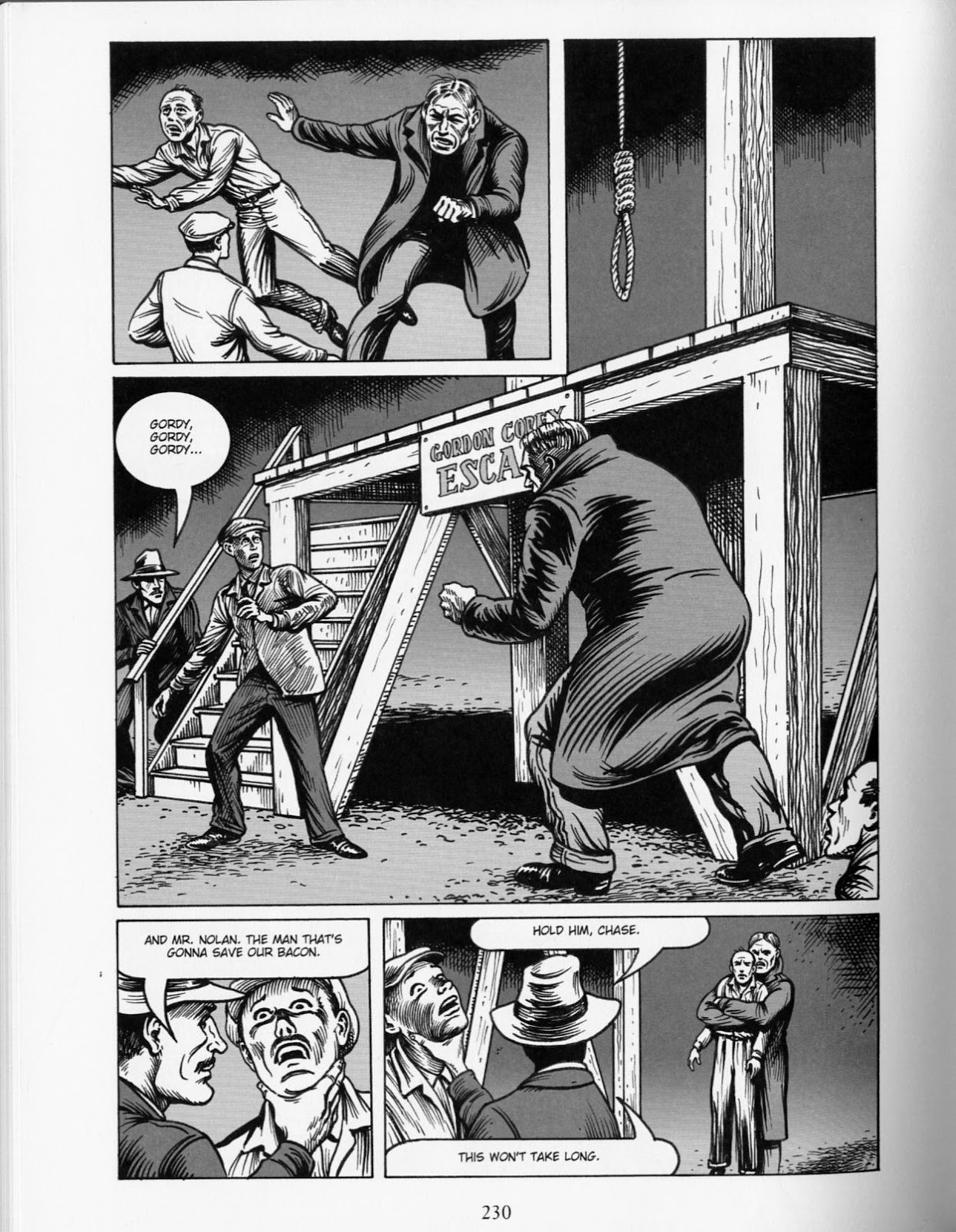 The art is a bit disproportionate in spots, but that's my only quibble, and it has matured considerably since the first series. Burr's work has just the right amount of detail and is accurate to the period (as far as I know- my Mother was born in 1930, so I have second-hand knowledge of the era). More importantly, the emotions are all spot on in the art and in the writing. The integration of story and image is virtually seamless in both volumes.
More than place or art, this is a story of people. That may seem like a "well, duh!" statement. But the hardest and first duty of fiction is to tell the truth. As we routinely indulge in fantasy, science fiction, horror, Westerns and other diversions, it's important to remember that people drive the ideas. The ideas here are old but vital: we have to take care of one another. We are all full of pain and joy, whether we see it in one another or not. And as H.L. Mencken bitterly noted, it is precisely when people are at their worst that they are the most interesting.This story, about people pretending to die to make a living, people fighting for right to work and others fighting to stop them, shows us at our worst, and at our best.
I hold out hope that either or both of these books will be successfully filmed someday. While we're wishing, it would be great to see James Vance and John Garcia's early 1900s Western Owlhoots completely published some day.
Until then, we have Kings in Disguise and 2013's On the Ropes to remind us of who we are, and who we could be.
Next: Best Comics of 2013 No. 8, an intersection of art, science and larceny.
on January 12, 2014 No comments:

Email ThisBlogThis!Share to TwitterShare to FacebookShare to Pinterest
Labels: best of 2013, comics, Depression, James Vance, Kings in Disguise, On the Ropes, unions, WPA

As promised, a double header this week. Only one page to go to wrap up this story.
The first of these pages is a bit adventurous in layout, and the second is much more straightforward. I had a great confidence and positive energy when creating the second page, and I hope it shows.
Not mad for the solution I've found for scanning, but it works. I will have to rescan every page before going to press anyway, and may decide to rework a couple.
When we left our party, they were trapped at the base of the Obsidian Crystal Ziggurat. Tolcanan's familiar Chiss had just been enlarged by an energy circle, from Tolcanan to Chiss to Kay Seurat-Suerat's wand and back to Chiss. He was about to engulf Master Pah.
Now read on. 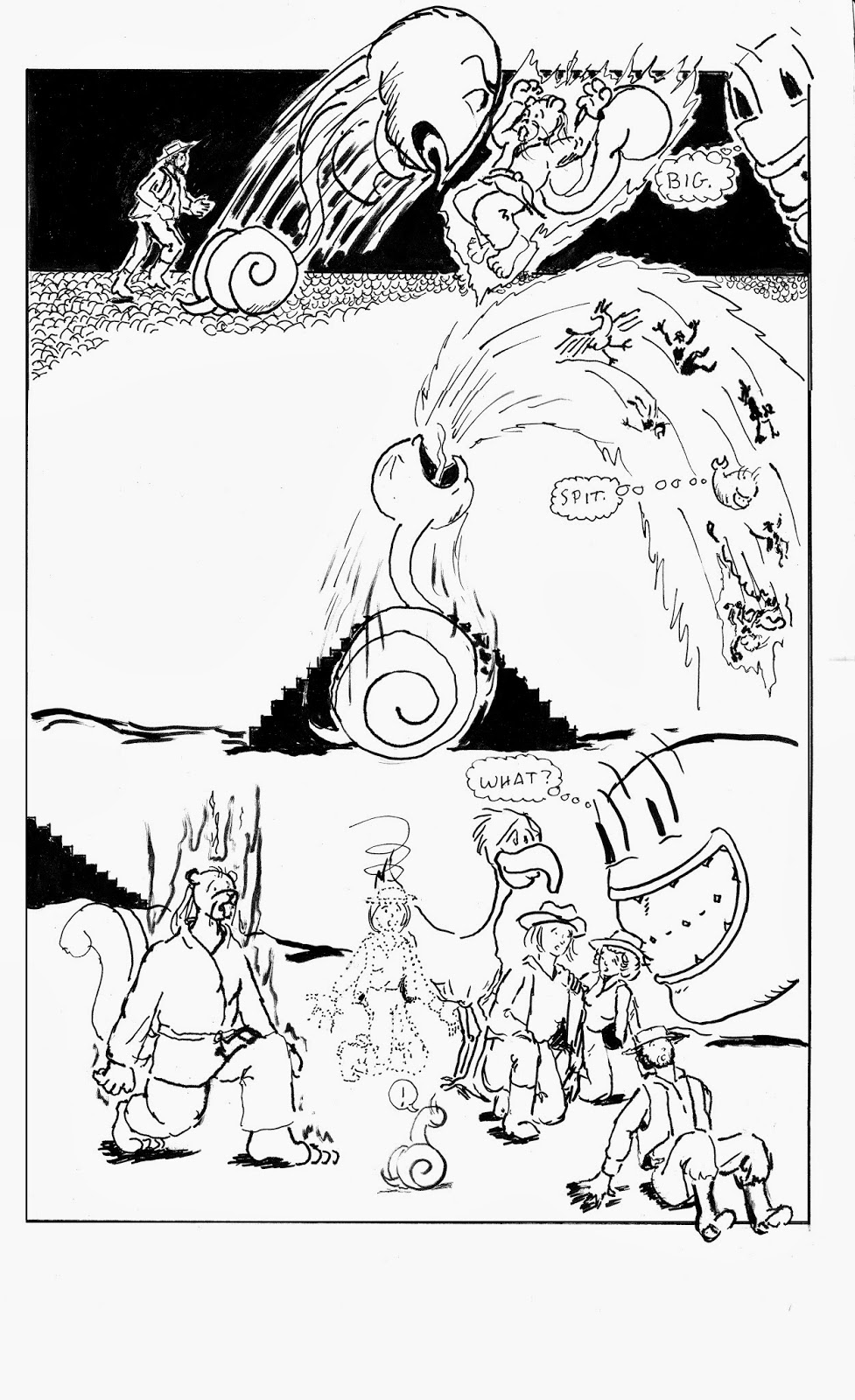 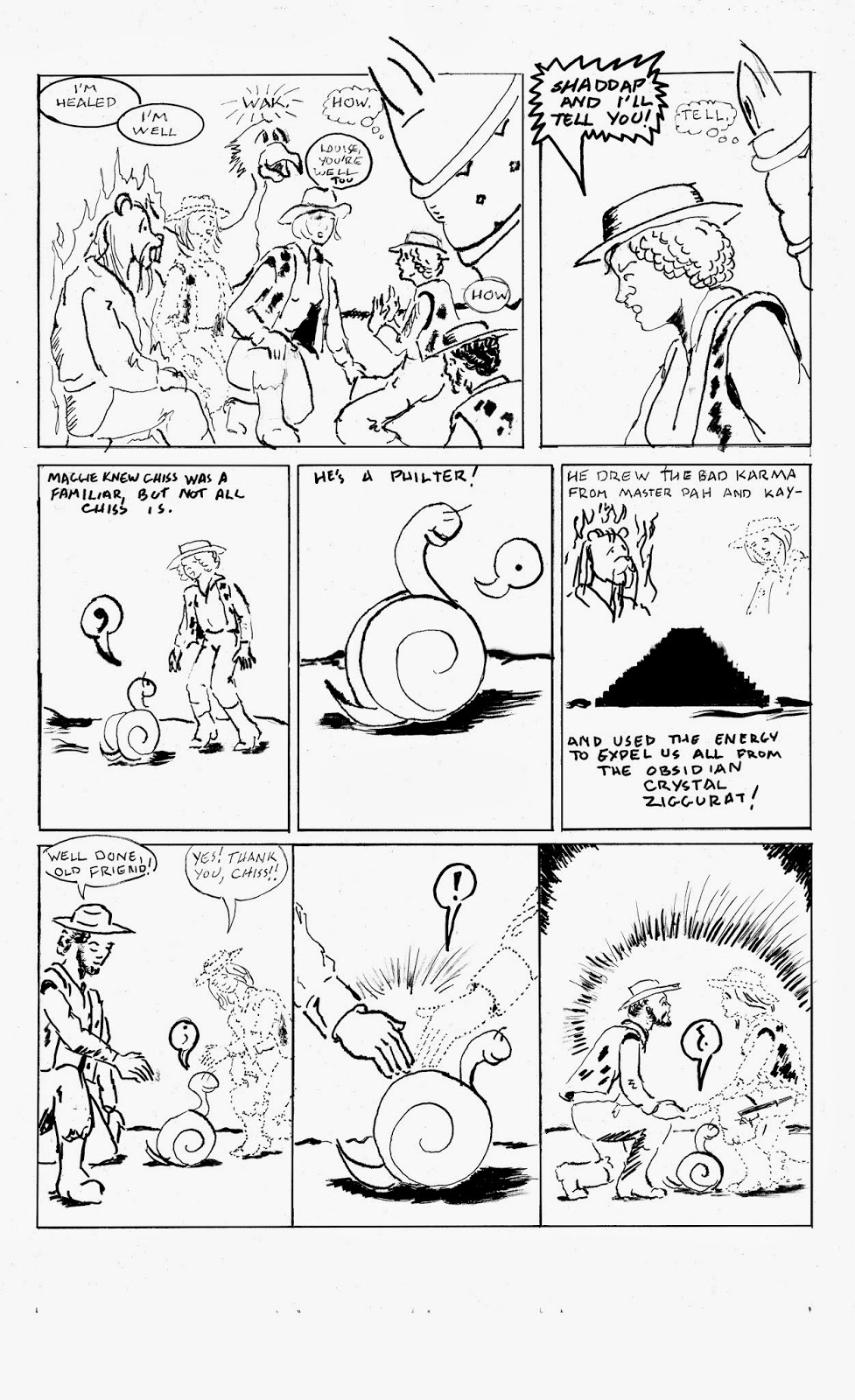 Next: The Surrealist Cowgirls in It Does This When I Hurt, conclusion.