Next page is 3/4 done. With limited scanner access again this week, I opted to concentrate on other work, including the class on Comic Book Writing that I'm currently teaching, and completing an article with a deadline of yesterday (I made the deadline, BTW).
Here are some pages from that same sketchbook to tide us over.

First up, a random stab at a female pirate, inspired by old friend Sarah Cardin's fascination with pirate films. Period piracy has become a bit of a fascination for me. I am vehemently opposed to contemporary piracy in most forms.
Next, an original superhero that was fully developed but whose story was never realized.
I had to severely darken the image to get the text to read. I pulled out the area around the figure, upper right, for a bit of contrast. The textured gray that fills most of the image is simply paper texture taken to extremes in Photoshop. In case you can't make them out, the notes in the page are:
This was an attempt to create a plausible female superhero, based unconsciously in part on the 70s version of the Huntress by Paul Levitz and Joe Staton, also on my meditations on Doc Savage, and inspired by a Tess Gallagher poem titled The Kiss, from whence comes the character's name. I had thought the hand-held crossbow was an original idea, until I realized I'd cobbled it unconsciously from this story- but the notion of the bow being collapsible and wrist-mounted is all mine.
Though I can find no specific record of the Gallagher poem (she wrote several poems about kisses, but I cannot find this one), I do recall hearing her read it on NPR and my fascination with it. The notion she described in the ensuing interview, that a woman's kiss could be a secret agent or a superhero, charmed and inspired me.
Of course, many of the ideas that I considered crucial to the character have since manifested in other wonderful characters like the Andreyko and Pina Manhunter series and the  Rucka and Williamson work on Batwoman, about which I've gushed in the past. In this context, it's also important to note Ivory Madison's revision of The Huntress. Sadly, she's done only one comic story since then.

This is my meditation on superheroes, women, and superwomen. I have the storyline plotted out and characters developed in notes- have done for decades- but as I have no shortage of current projects, I wonder if it will ever see fruition. I suspect this is one of those things on which I would write and hand the art off to someone more suited for such work.
As always, I am overwhelmed by the number of projects I start and seldom finish- a common problem, I hope!- but I do take heart in the occasional completion of one.
This is the issue I bring to my writing students. Others only see the finished product as 100% of what it is. The creator sees it as a much smaller figure, sometimes less than1%, of the vision, of what could be.
Next week, back to the Cowgirls!
on July 21, 2013 No comments:

Another page on schedule! What's the world coming to?
Well, maybe it's coming to me.
I think I'll rework the second panel before taking this to press. For now, it tells the story just fine. 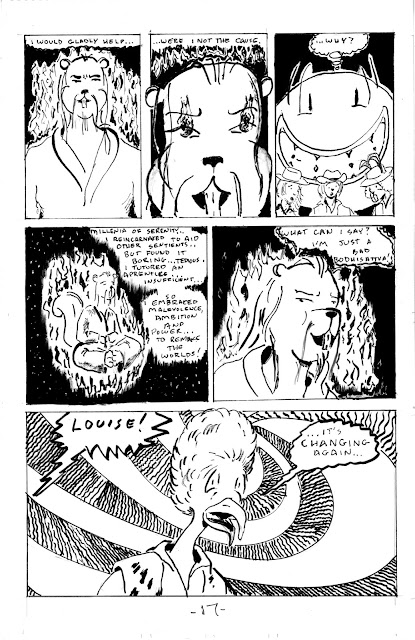 Lots of elements here I like. The layout is simple yet interesting, it moves the story along nicely, and the morph in the last panel is very compelling. I love working with swirling, flowing lines and patterns.
The "bad Bodhisattva" is a reference to a song by one of the bands of Greg Merdick, a friend trough Kim Matthews. The song is a fun ditty called "Bad Buddha."
I'll put up an extra post of non-Cowgirls stuff this week.
I'm teaching on Monday nights for the next month, a course on comic book writing, so I hope to complete the next page today so I can scan while I'm at work tomorrow. But the story will continue next week either way!
on July 14, 2013 No comments:

As promised, the next page of the story, long overdue!
I've talked in the past about the challenges of self-imposed deadlines. The truth of it, which I sometimes bypass, is that if it's important to you, you make time for it.
There are sometimes circumstances that interfere with this, especially those related to survival. We're talking Maslow's Heiracrhy of Needs here. While even Maslow acknowledged that his theory has flaws, at its core it's solid. One cannot learn as efficiently on an empty stomach, just as it's more difficult to produce creative work when one's resources vary widely and survival is sometimes an issue.
However, difficult is not impossible. J.K. Rowling wrote the first Harry Potter book on the London subway going back and forth to work. Not the most efficient way to work, but the results cannot be disputed.
As Reed Waller once told me, if your work is good, it will be recognized. That doesn't mean you'll get rich, or even that you will necessarily make a living, but the work will be recognized.
It's been 23 years since I first seriously pursued creativity as a profession. 23 years of fits and starts, mostly as a result of my self-doubt, but ultimately 23 years well spent.
To this date I have no idea if my work is any good or not. I just know when I'm doing doing work I like, and I like this story.
The next page is already 3/4 completed.
While we look forward to next week, enjoy the current page of our story. 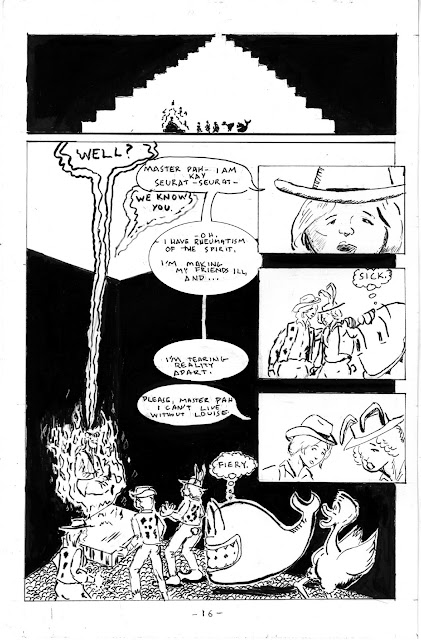 I'm pleased to report that the next page of The Surrealist Cowgirls is completed, and will be scanned this week for posting next Sunday.
For this week's offering, here are some sketches from the jury box of the trial on which I recently served. I will make a separate post later this week discussing the case itself, with some accompanying comics!
These were all done in ballpoint pen on yellow legal tablets.
There are still occasional illustration jobs doing courtroom sketches. There are some courts (like this one) where cameras are not allowed, and newspapers and magazines still occasionally hire courtroom artists, though the practice is dying out.
I did about 70 sketches during the trial. I may organize them into a comic of the trial at some point down the road. But now, here are the most interesting of them.