Original Art Sundays, No. 242: Queers and Comics Drink and Draw

After months of working two, sometimes three, jobs and dealing with writing assignments, I'm back in the art saddle, so to speak!
These illustrations happened as a result of my attending and participating in the Queers and Comics conference in San Francisco last weekend, which was possibly the best conference I've ever attended. In addition to my contributions to the Queers and Underground Comics and Trans Cartoonists Navigating the Industry panels being well received, I got to spend some time with old and dear friends, including Trina Robbins and Roberta Gregory, and make some unexpected new ones. The Queers and Undergrounds panel was satisfying in that I thought I had little to contribute compared to some of the luminaries on the panel, like Howard Cruse and Vaughn Fricke (with whom I later had a wonderful chat), but I held my own. And after the Trans panel, some folks asked where they could buy my books, so courtesy of the Dealer's Room, I sold come copies of Surrealist Cowgirls and the draft edition of Sharp Invitations.

The first night, Thursday, had an opening ceremony I passed on to share a couple drinks with my gracious host Noel in a Castro bar. However, I did attend an opening at Strut, a community health and wellness space for Gay, Bi, and Trans men that doubles as a gallery space.The opening of the work of Salvador Hernandez culminated in a Drink & Draw. The models were bears and leather boys.
All the poses were short. 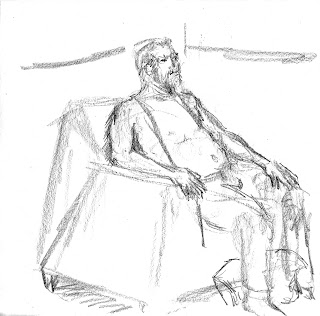 This was done before the poses had officially begun.
I was a bit apprehensive, as it's been a while since I've done live model drawing, but the key remains constant.
Remember the basics. Build the figure from the inside out, rather than trying to do an outline drawing. Looking around between sketches, I was surprised and dismayed to find so may artists trying to do an outline. The teacher in me wanted to take over, but I held myself back.
This was one of the most relaxed and easiest sketches. The subject sat relatively still for most of five minutes, enough to get a sense of mass and proportion and a sense of place. 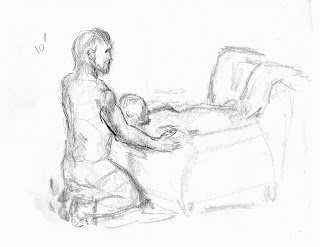 The first official pose involved two models. This posed some foreshortening challenges, as one subject was prone while the other kneeled. I struggled with proportion issues on the feet for a while, then made the deliberate decision to concentrate on overall mass.
It was a special challenge to map lights and darks, since the light was gallery light- very bright and even, and offering few cast shadows! Still, something as simple as a hint of a cast shadow beneath a chair can do wonders in this arena.
As the note indicates, this was a 10 minute pose.
I wasn't particularly interested in facial expressions on these, but I did want to get a reasonably accurate sense of facial features and proportions. 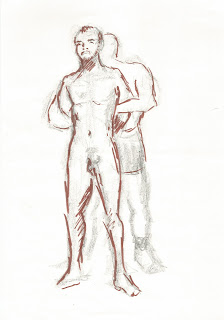 This was part of the penultimate pose, another duo. I found the pose intriguing and the relative size variations of the two men a fun challenge.
I found myself losing my place in mapping the relative features and seemingly simple, yet not really so, proportions of the front and back gents. To try to remedy this, I went in with a brush tip marker and did some outlining in spot color. I think the decision to stick to one additional color was wise. Had I more time, I could have done some fun things with pushing background tones in both graphite and rust tones.
It should be mentioned that, aside from this one, these pieces are all done on marginal tooth sketchbook paper with #3 and #4 graphite pencils.
I was also the only person I saw using an eraser!
Please. It's not cheating to correct as you go. It's smart.
I took out quite a few construction lines, but elected to leave some in, as they add to the overall feel and energy of a piece sometimes. 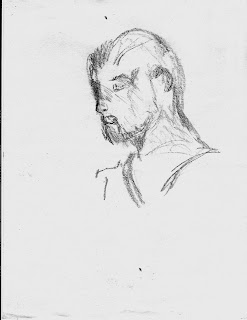 The final pose of the evening was a complex interlocking of all the models- eight, I believe. The alternated facing front and back and linked arms behind the backs of the gent next to them.
I found this pose impossible. It was a fairly long pose, 15 minutes if memory serves, but I started three times and grew increasingly displeased with my results each time.
I made a deliberate decision to edit, and concentrated on a head shot of one of the leather men.
In retrospect, while this would have benefited from some background tone, I'm pretty happy with it as it is. There's a sense of confidence and repose in the face that I find very satisfying and reassuring. It's nice to end a session on a good note. While some might find it cheating to do a head shot in a figure drawing session, the reminder that this isn't a class applies to me too. The only people I'm answerable to in making my art are me and any clients/readers I may have.
Additionally, this is a good sketch, especially for the three minutes I took for it. Since photography was verboten during the session, you'll have to take my word that this is a reasonably accurate representation of the model's face.
At one point, I got frustrated by the barrage of testosterone I was drawing. This is not to disparage the models or the venue. I just wanted variety. At that point, I started drawing another artist, a young lesbian who was sitting directly across from me. 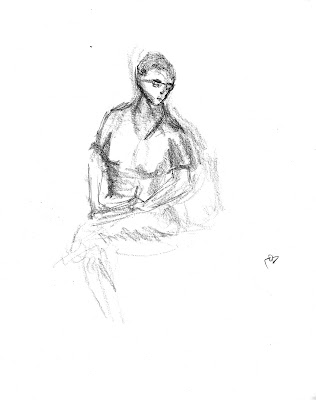 This is the first of two drawings I did of her. The second, which I liked much better, I gave to her. She left almost immediately after I did so!
When I saw her at the conference the next day, I apologized for my presumption and said I hoped I hadn't freaked her out. She replied no, she had to leave at that time as her girlfriend was picking her up. She added that both of them loved the drawing!
I'm very sad that this conference doesn't happen again for two years. I talked with one of the organizers, Jennifer Camper, about having one in the Midwest, ideally in Minneapolis. She opined that a smaller one might be a possibility. After watching her run about madly for three days, I could see her point. I still think it's a good idea. Not that I need another project, but I plan to bring this up to some friends and see if it goes anywhere.
Next new art: the anniversary sketch.
on April 23, 2017 No comments: