A tad late, but only due to the holiday! 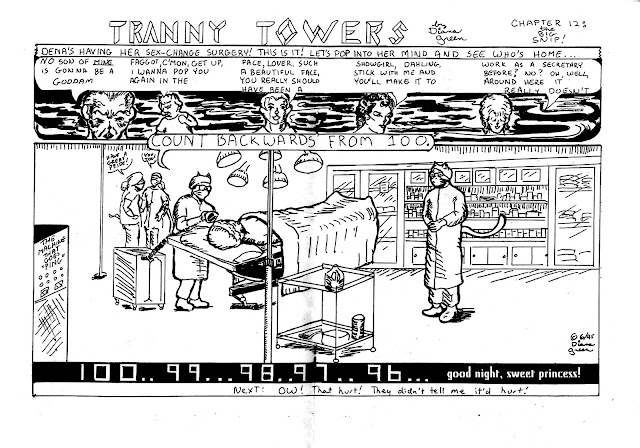 This strip was timed for Pride, as surgery is celebrated in trans communities (or used to be, at least). It was presented as a double wide strip, taking a full half a page in a 9" x 12" magazine.
Again, some playful graphic elements, notably the title composed of scalpels and the swirling memories in the free association panel that leads into the main action.
In retrospect, this is rather sparse for an operating theater, and she is not exactly, ahem, in position for this particular operation. Also, that cart is in isometric perspective, not linear.
Ah well.
Bear in mind as you read these that they were, aside from this one, printed at about 3" w x 4 1/2"h.
These have not been reprinted in 15 years.
The reversed out text at the end of the bottom banner has been digitally re-lettered, as was the "machine that goes ping" on the side of the, well, machine that goes ping.
Next week: something a bit different.
on December 28, 2010 No comments: