Now that grading is done and I can concentrate on getting a new fill-in gig and putting this year's design projects to bed, I can catch up on my blogging a tad.
First up, those new paper doll finds I promised last week!
The first is a jam paper doll series, the center spread from Wimmen's Comics No. 11. 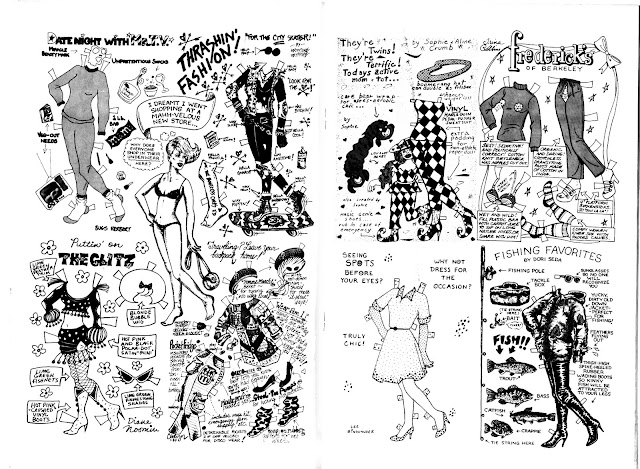 Included in this delightful piece, clockwise from top left:
Bugs Herbert
Aline & Sophie Crumb
Trina
Dori Seda
Lee Binswager
Caryb (?)
Diane Noomin
This may be the first time I mentioned the late, great Dori Seda here. Her work has this compelling combination of raw raunchiness and innocent vulnerability.
Next up, another Trina Robbins paper doll, this one from Gay Comics No. 25. 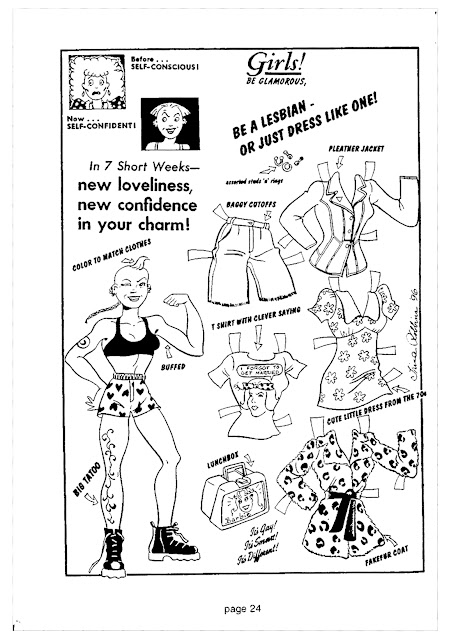 This piece is noteworthy in a couple ways.
First, it's a sort of redemption for Trina. Her story "Sandy Comes Out", from Wimmen's No. 1, was one of the first, if not the first, comic story about lesbians, dated 1970. Mary Wings took exception to the story, and followed with her 1974 book Come Out Comix. It should be noted that Trina and Mary remain friends and that Trina's subsequent work in this arena has been very well recieved.
Second, Gay Comics No. 25 was the last issue, and featured most of the creators who had appeared in the title prior. To the best of my knowledge, it's the only time Trina and I had work in the same comic! I posted my Tranny Towers page from that issue some time back.
It's possible Gay Comics will return, but I've heard nothing of that possibility for almost two years now.
Tomorrow: Catch- up Post No. 2.
on December 12, 2010 No comments: