The next page of A Private Myth is still giving me fits, but I think I know what's wrong now.
Meanwhile, rather than keep readers waiting indefinitely, here are some images from yet another uncompleted project.
I was working on an alphabet book based on pirates, more than a decade before the Pirates of the Caribbean films (which I rather enjoy). The book used the framework of a couple young girls gleefully talking about pirates.
Here are a couple of the pieces, done in watercolor technique using colored inks and dyes. 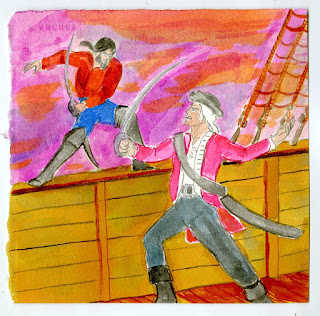 This piece was about Privateers, the licensed pirates of the British and Spanish crowns.
The colors are a bit off, and my control of background around people and objects was a bit lacking- still hadn't mastered masking!
And the foreground figure is a bit stiff, and the color of his coat is too close to the background sky.
So it goes. 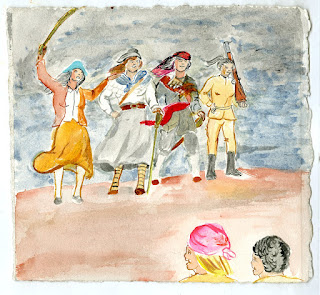 This piece, which I much prefer, is an illustration for a page devoted to women pirates, who span all nationalities. I particularly like the one in white with the blue kerchief.
I love the subdued tones, and the interplay of inks and paper texture pleases me.
I went out of my way to get the weaponry and boats right, but I suspect I made some errors despite my best efforts.
This is another one of those "I'll go back and finish it some day" projects.  Such a big pile of those!
Then again, it may have been rendered unnecessary. The market may be glutted with pirate stuff now. More's the pity, as the relative percentage of good pirate stuff to total pirate stuff is rather low. Still, I did like the last Pirates of the Caribbean film, the one loosely based on Tim Powers' novel On Stranger Tides, even if it didn't clean up the loose plot threads from the previous film in the series.
Next week: something....
on April 23, 2012 No comments: