You find the strangest things in a move. 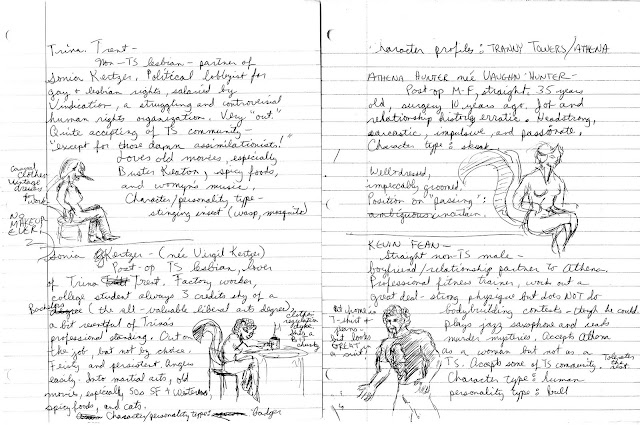 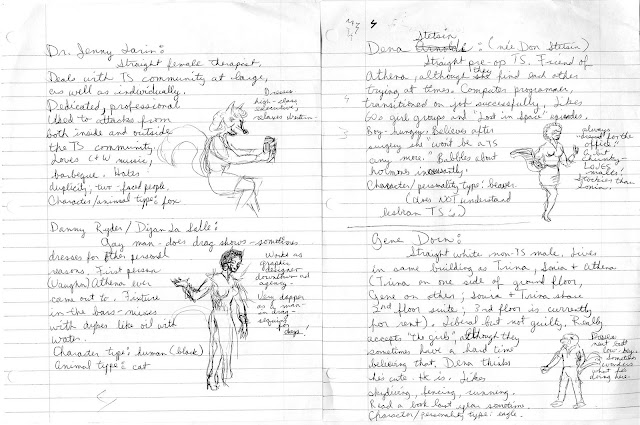 As a case in point, these are pages of character notes for my attempt to expand Tranny Towers into a graphic novel. This attempt was still in the funny animal subgenre, which I let slide away when I created a dozen or so pages of the same story under the title TranScending, some of which I've published here in the past.
Many of the notes are simply extensions of the established characters in the then-current strip. Actually, a few of these characters,
Dena, Athena, Trina and Sonia had lives that predated the strip.
Trina and Sonia appeared in my first strip in TransSisters magazine, and Sonia was in a strip in TNT News a bit later, offering editorial commentary on the MN State anti-welfare legislation that included elimination of state-funded surgeries.
Athena was in my strips in GAY Comics issues 18 and 25.
Dena joined her in issue 25, and both appeared in my first self-published comic, Ink Tantrums No. 1. Drop me a line if you'd like a copy. Out of the 250 print run, I still have about 50.
In addition to the aforementioned appearances and truncated attempts at a larger work, I tried a trans related strip with a lighter touch circa 2003. I submitted the following sample strip to Queue Press around 2003.
One issue came out after the strip's rejection, then the paper folded. So it goes.
This has never been in print. 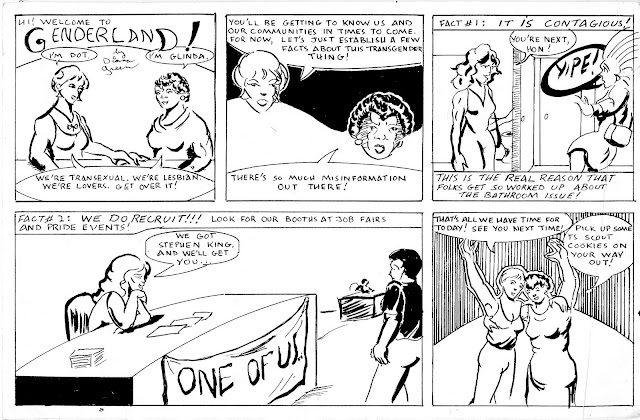 I rather like this one, but nobody else seemed to. I think it could have been a lot of fun, playing with light hearted gags.
One of the reasons I backed away from doing a long-form story about trans issues is that most of them are  the same story. Outing, bashing, suicide attempt and self-acceptance. It's an important story, but I'd like to think we have more than the one. Rachel Pollack's character Kate in her Doom Patrol run (pictured below) is an example of the possibilities of trans narratives, possibilities that are seldom realized. 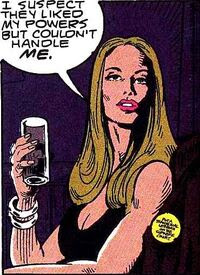 Next week: well, it's Christmas next Sunday and I don't know if I'll be around to blog. I might post early (or set up a timed post or some such).
We'll find out when we get there.
In case I don't see you, may your holidays be kind to you.
on December 18, 2011 No comments: