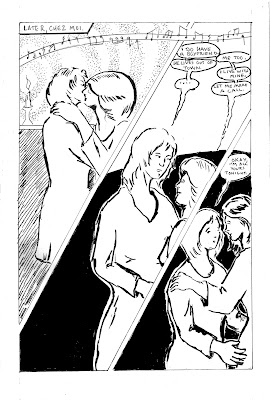 What I like about this page: the pacing and layout are right. Initially I had reservations about the sliced angled panels, but it struck me as a way to slow the moment down while maintaining the tension between the principals.
The line of music, loosely rendered, is an ersatz version of the melody to Holly Near's classic song How Bold. This is a song that I would play while dancing and exercising alone, while I lived with Curt, when I thought of Delia.
The trembling tails of the word balloons echo the tone of the moment- soft and eager, yet afraid the whole thing would fall apart at any moment.
It's worth noting that if Delia is reading this, she's probably howling with laughter. She's much more self-assured than this implies, and has such a fericously independent streak that she would NEVER say she belonged to anybody, as is implied in her last line here. But it's verbal shorthand for a very long, elaborate conversation we had that day.
What I don't like about this page: the backgrounds/environments are better, but still need work. The candle on the mantle gave me an excuse to stipple a bit, always fun. The backgrounds disappear in the second and third panels, replaced by a large grounding area of black. This is a little bit of a cop-out, but not much. In that moment, everything did fall away except the two of us, at least as I experienced it.
Also Delia's facial expression in panel two and mine in panel three are a bit wanting. I find drawing left face profiles very challenging. Judging from the few I've seen in comics in my research, I'm not alone in this.
We're coming up on a big scene in the next page. I've been stalling on it a bit, but the core of this work is honesty first, cutting myself slack second, so we'll jump in.
Net seven, as they say in the business world!
on June 26, 2017 No comments:

Beginning the post before midnight, so technically still a Sunday post!
I had a devil of a time resolving this page/section of the narrative. In the draft version, two major people enter my life and the relationship with Curt takes an unnerving turn, all on one page.
The more I looked at it, the more I realized that I was trying to rush through/gloss over one of the more awkward spots in my life, either before or after transition. That one page will now be four, possibly five pages. Given the scope of the events covered, that still may not be enough. The important thing is to let the story breathe, without bogging it down in tedium or omitting crucial information.
Here's the revised version of this page.
I'll post the original draft after I've completed this segment. 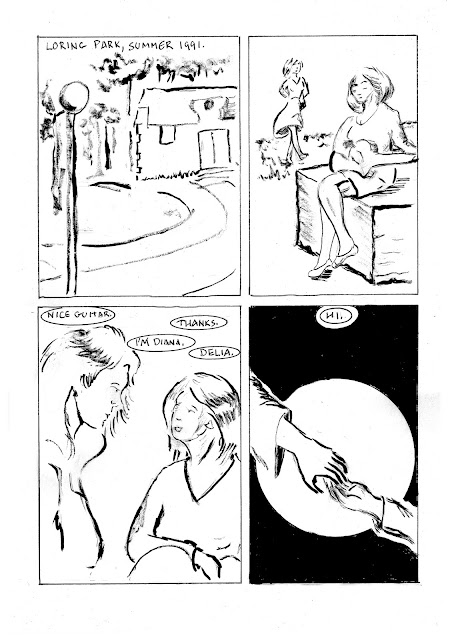 I'm also trying to get away from telling and getting back to showing. No flashback narrative on this page!
This page reverts to inks. I'm a bit rusty, and my inks were gummy, making use of a crowquill almost impossible, but it's a poor workwoman that blames her tools. I may redo this page yet again. I don't mind the rough, raw feel of the rendering of Loring Park in the first panel, but the building, shot straight on like that, looks rather flat.
I've changed the name and the appearance of the woman I met in the park that day, as I've not been in contact with her. I've been trying to let people know when they are included in the book. If I can't contact them, as is the case here, I'll make them anonymous, while holding on to the events in question.
Also hand lettering this page! With this sparse text, it seemed superfluous to letter digitally.
I will review the work when this chapter is complete, to see if it flows with the jump from pencil to ink. As alluded to in a previous post, the last page of this story has another jump in style, so I suspect it will be okay.
The poses in panel two are consistent with the idea that characters' positions should do at least as much to convey story as dialogue.
I debated the merits of throwing in a background texture on panel 3 and decided against it. Backgrounds/environments remain a tentative area in my work. But I like the rendering of the figures in panel 3. Just enough dry brush to make it interesting, and a good variation of line weight.
The last panel just fell into place. Once I realized I was concentrating on the hands touching (which, believe me, was a very potent moment!), the silhouette became the way to go. I do so love a good silhouette.
I'm working through detailing my past stupidity.
Understand me on this one. I don't think I was stupid to be with her, or to commit any of the actions that follow in this story. My stupidity is the same here as it is in most of my stories. If I had just been honest from the outset, I would have saved myself so much trouble!
But in order to be honest with somebody else, you have to be so to yourself first. And at that point, I wasn't there yet.
Next: page 6 of the expanded Curt story.
on June 19, 2017 No comments:

Posting late this week due to two considerations. I have a heavy work load this week, to make amends for work lost due to the recent car accident (I'm healing well, thanks for your concern). In addition, I ran into an impasse on a couple crucial factors on my next page (more about that in the next post).
To deal with my frustrations, I decided it was time to make my studio better. Not perfect, just better. I was tired of navigating the space like it was Fibber McGee's closet.
I had stacks and stacks of papers, books and magazines, boxes of old documents awaiting filing (either in the cabinets or, in most cases, in the proverbial circular file). I had also made a critical error in my initial studio setup, putting my drawing area against the wall and my writing area by the window!
Here's the initial chaos.

Stacks falling over, stuff precariously balanced atop bookshelves, no moving room between writing/office space and drawing board. Every thing I needed to get at to draw properly was at least three moves.
Here's how it resolved.

More effective use of space, and much cleaner. Right now, the studio is the cleanest room in the house, and it's not because the rest of the house is dirtier (the rest of the place is not too bad)!
By switching the drawing and writing areas, I was able to get a better flow. It's still not perfect. I want to rearrange the bookshelves slightly. The old media stand beside the short bookcase, which serves as a tabouret/ storage for some unwieldly odd shaped art supplies like triangles and ellipse templates, is now on the opposite side of the room from the drawing board. There are still some papers to sort, but it's down substantially and they are now in one location as opposed to an uncountable number of places. For some reason, putting up art in this room has proven to be a rather annoying prospect.
I'm toying with getting a strip of peg board to mount stuff like big triangles and long T-squares.
I have a reluctance to getting everything just so. Historically, whenever that has been achieved, that's when I have to move. And I hate moving.
Until such time as either or both of those things happen, this is not perfect. But it IS better. There's more of a Zen flow.
The new-ish space is inspiring, or else I've let go of my inhibitions, because a few days after doing this, I realized what the big issue was with the current page, and now I know how to resolve it!
Next: the frustrating page and its resolution.
on June 09, 2017 No comments: