The next page is done, so here we go.
When last we left our heroine (me), she was happily surprised to find that Delia had told her boyfriend she was spending the night with her.
Read on. 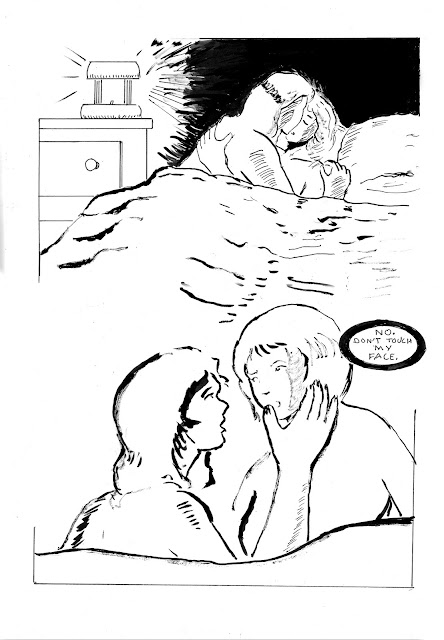 Much I like here, a few things I don't. There's enough background/environment to give a sense of place, but not so much as to detract from the action. Just a hint of a dresser and a lamp (which I still have but now sits on my desk) to give a sense of place. I did some preliminaries in which my usual dresser top clutter was included, but decided it was too much of a distraction. This page is about one thing, and the dresser ain't it.
The layout is simple. Two panels without dividers, split by shift in viewpoint and in action, implying closely timed moments. I'm using the old trick of dropping borders to slow action, but using a partial overall border to contain and define the area.
I thought a lot about how raw to make the sex scene. I shied away from showing The Act, partially out of my own modesty (which will be blasted out of the water in upcoming pages anyway), and partially out of respect for Delia. If the real Delia is reading this, she's probably howling with laughter at that. Then again, maybe not. She always could surprise me.
I stole a bit of a Frank Miller trick in the first panel. In his image for the Images of Omaha collection, Miller used cast shadows on the bedding to define the form beneath. I could have pushed it further, but my art tends to be of the less is more school, and I'm good with where it ended up. The shadow creeping on the wall from the lamp still needs a bit of clarity- possibly I'll just use Photoshop, since everything else on the page is working very well.
After much consternation, I elected to completely remove the dark background on the two-shot in the bottom tier to concentrate on us girls.
Delia's comment was very telling. In the next page, I'll tell a bit more of her story, but not much, because it is HER story. While she once laughingly told me she'd share her story with anybody, that's her choice, not mine. Here, you get just enough that it helps define our relationship.
Again electing to work in ink rather than pencil. Curt's story (of which this is still part) will be told in pencils, inks, and photography. I just hope the bouncing between media doesn't detract from the flow.
Materials used on this page:
Canson XL Recycled Bristol.
#4 and #2 lead and lead holders
Magic Rub eraser
Pro-4100 India Ink. This stuff clogs my crow quill nibs like crazy, but it's great for brush work.
#1 Sable brush and #4 synthetic brush
Ames Lettering Guide (yes, really), 0.3, 0.5 and 0.7 tech markers
Ellipse template
I'm emotionally raw today, as I prepare for a new class I'm teaching starting Wednesday night and am writing a very emotional postscript to the current work, possibly the most honest part of the whole book. Still, it feels good to stay on self-imposed schedule with this.
Next: more of Delia by way of Curt's story.