Avatar Press has done some impressive, but frustrating, books.
Fevre Dream is no exception.
Based on the George R.R. Martin novel from 1982, this riverboat vampire tale can be seen as a thematic successor of sorts to the Anne Rice stuff from 1976. Beautiful vampires,  a set of vampiric laws revealed to a hapless soul drawn into their sphere (in Martin's case, a steamboat captain; in Rice's, a reporter), and a power play between said vampires. The core elements are certainly comparable.
But that's as far as it goes.
Martin's characters, especially the Captain, are more, dare I say, human, and lack the high-flown trappings of overblown prose that Rice inflicts on her characters, even in their early 90s Innovation comics versions.
Also, Martin writes to be read. Rice seems rather full of herself as a writer, at least to me.
This is a great story, made all the more so because of its twists and turns. It was long overdue for adaptation, with its kinetic and visceral aspects.

Fascinating characters indeed.
Is the Captain concerned for the welfare of his crew, himself, humanity? Yes, but more of his concern lies with his ship.
Are his vampiric co-owners and passengers a threat? Yes, but no so much that they cannot candidly speak of their necessary business, and they may be a greater threat to one another than to humanity. 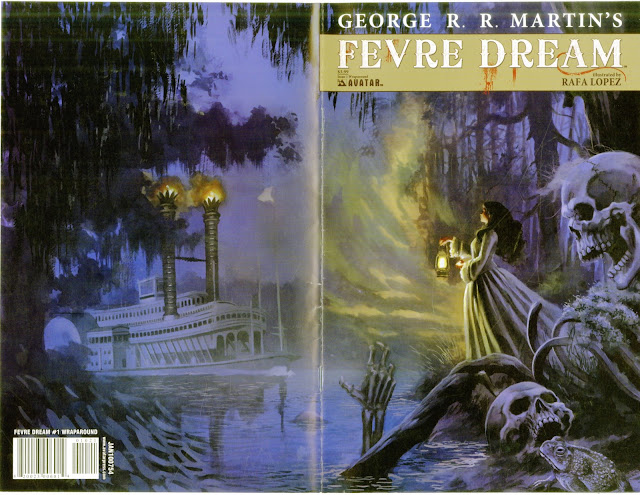 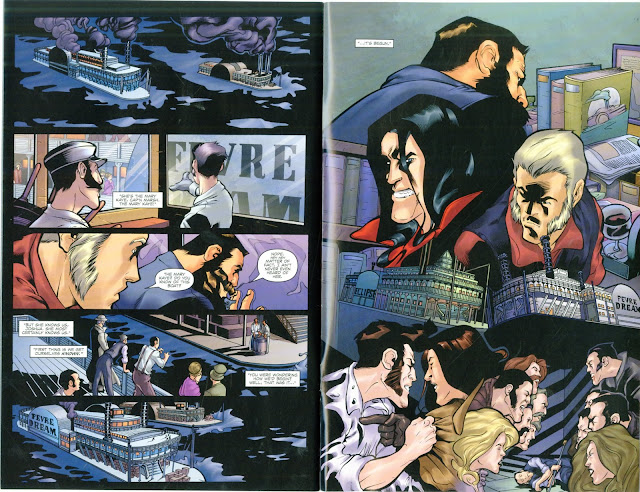 Rafa Lopez's art alternates between chunky and sleek, with heavy elements of caricature (and lots of rather large hair for 1857!). I wasn't mad for his work on Lady Death, but then I wasn't a big fan of the book in general. The writing integrates smoothly with the images: a classic blend of show, tell, show and tell, and all the permutations thereon. Daniel Abaraham's "sequential adaptation" is consistent with the source material.
As alluded to earlier, the publisher, Avatar Press, is a mixed bag. They produce books of consistent quality (though I was quite disappointed in Alan Moore's Neuronomicon). They publish some fine Warren Ellis works- I really liked last year's Ignition City, for example, and this year's Captain Swing was wild steampunk fun. Some of their stuff, like Miller's Robocop books and the George Romero stuff, does nothing for me, but I recognize their quality even if they're not to my taste.
Every issue of Fevre Dream is offered with multiple covers, as are most Avatar books.
Multiple covers? Really? How 90s pre-bankruptcy Marvel of you.
I think the wraparounds are just fine, and see no need for other covers. Why go to the extra expense of printing multiple covers?
Avatar has a fairly chunky ad section, all house ads, all conveniently put in back of the book. Damned decent of them.
However, the ads are mainly a back issue shop, and offer back issue prices on books not yet available, as well as multiple "special" editions of their books.
This is a mite confusing, and I can't believe this practice helps their orders any. Dynamite used a similar strategy on a slightly smaller scale with its Lone Ranger line, which ends this month, I'm sad to say.
Fevre Dream is not Martin's first foray into comics. His Hedge Knight series has been servicably adapted by Marvel, and his Wild Cards anthology was adapted as part of Marvel's Epic line more than a decade ago- fitting, as it's a "real world" superhero anthology. There was a Dynamite revival of the title recently, but I can't speak to its quality, having passed it by at the time.
Here's a bit of the Marvel/Epic stuff. 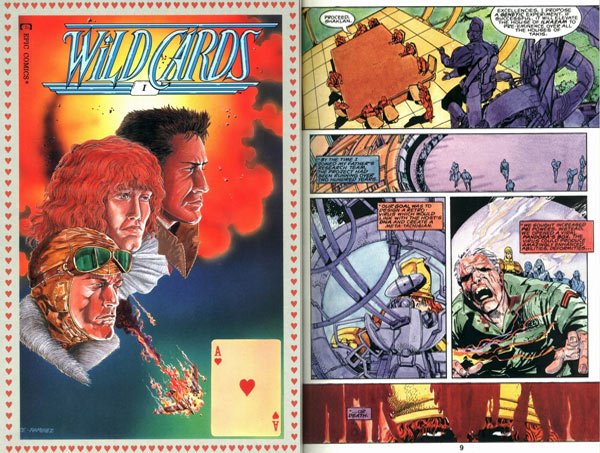 Comics have long been accepted by those "in the know" as a viable vehicle for adaptation, in some cases more so than film, or at least on a par with it, as evidenced by Jon Muth's version of Fritz Lang's M.
I hope they do a decent trade of this series. If not, I'd happily have my issues bound.
Tomorrow: No. 9 of 2010, as we go from drinking blood to....
on January 05, 2011 No comments: