Between illness and scheduling conflicts, I've neglected my posting for a while. Attempts to catch up begin, well, now.
I attended Spring Con in St. Paul last weekend for both days and had a splendid, if exhausting, time!
News:
Johnny Recon, a book I picked as one of my Top Comics of 2010, has not had a new issue for quite a while. This is because its creators, Mitch Gerads and Scott Dillon, have signed a new publishing deal!
They were not at liberty to divulge details, but were quite happy. Possibly this is a new model: hone your craft, do a Kickstarter for recognition, get picked up by a publisher?
The models for becoming a comics professional have evolved over the decades. Initially, an aspiring comics creator, especially an artist, would work their way up through apprenticeship. This was followed by a few dangerous years in which creators jumped into self-publishing with little regard for learning craft, and equally disastrous results.
Following that, folks began posting comics online willy-nilly.
As we worked through Web II and Web III, that evolved into a number of alternative funding models. Kickstarter, which will get a separate post soon, is the latest and, in many ways, best of those models.
In any event, congratulations to Scott and Mitch!
Appearing at the Con for the first time: the Minneapolis Roller Girls! 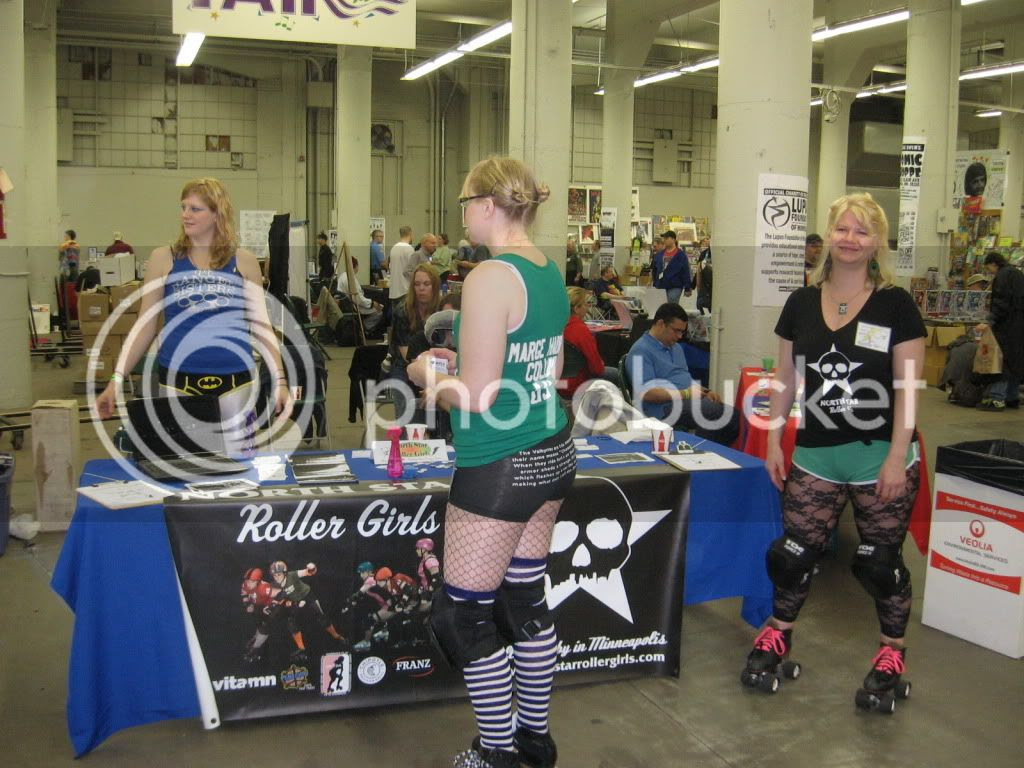 My old friend Jenna, from Trans Voices Choir, was also a Roller Girl. Their spirit is indomitable and contagious.
It's one thing to have folks around in really cool costumes. That's plenty of fun, but it's still in the delighful realm of make-beleive.
It's quite another to have costumed athletes in such an unusual, exuberant sport in, ahem, uniform, promoting their trade.
Even though it's still unreal, it's more real, if that makes any sense.
Other big news: after two years of waiting, the newest Uptown Girl book from Bob Lipski and Brian Bastian is out!
Here's a shot of the book from Bob's blog: 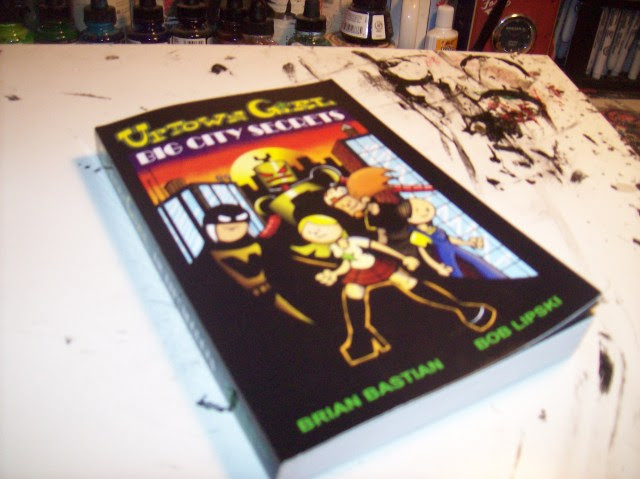 There are some differences between this and past works in this fun series. The size and format are a bit different, and the lettering is digital. It's quite legible, but I'm not sure if the font (Cooper Black, I think) is a good match for Bob's clean, spare art.
That said, the story is as much fun as always, and just as engaging. I hadn't realized how much I'd missed having a new Uptown Girl to read until I went without for a while. This was the only new book, pretty much the only book at all, that I bought at the Con.
But not the only book I got! I burned a copy of the Recobbled Cut of Thief and the Cobbler for old friend and fellow cinephile Sam Hiti, and he gave me a copy of his newest, Death-Day, part 1, in trade, completely unexpected on my end!
Sam's work fascinates me. He creates a meld of Sergio Leone, Jack Kirby, and Doug TenAppel, seemingly without effort. I wasn't able to afford this when it came out last September, so it was a welcome addition to my Hiti library!
Also in attendance: Geoff Sebesta, who I hung out with at the CBLDF benefit the first year I attended San Diego. Geoff has expanded his I Am the President of Ice Cream (I have one of the earlier versions), and I begged poverty, promising him a sale next year! Here's a shot of the smiling, charismatic Geoff at another con. His smile is usually much bigger than this: 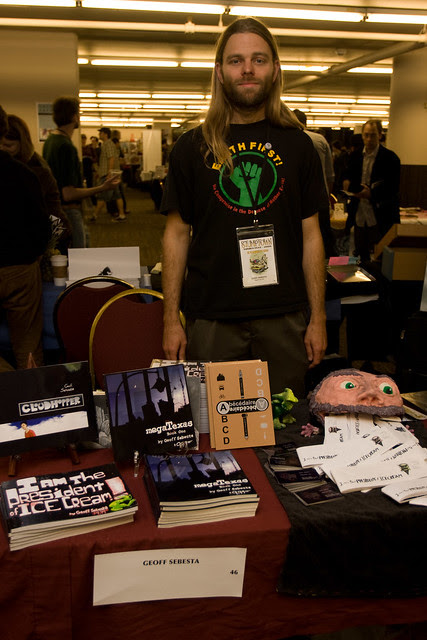 But my personal highlight of the Con was the presence of dear friend Trina Robbins, with her partner Steve Leialoha, the cutest couple in comics.
I'm running out of time and will finish this post tomorrow. So much more to say!
on May 31, 2011 No comments: