Back in the saddle again!

The story is reasonably predictable, but necessary, at this point. I'm in hospital, as the British say, and surgery is imminent. I freely stole this visual idea from myself. This is a theme that I used in a Tranny Towers strip about surgery: the idea of talking heads drifting in and out of the patient's mind as anesthetic takes hold. I also reincorporated the concept of one person's line leading to the next person, using words as "connecting footage". 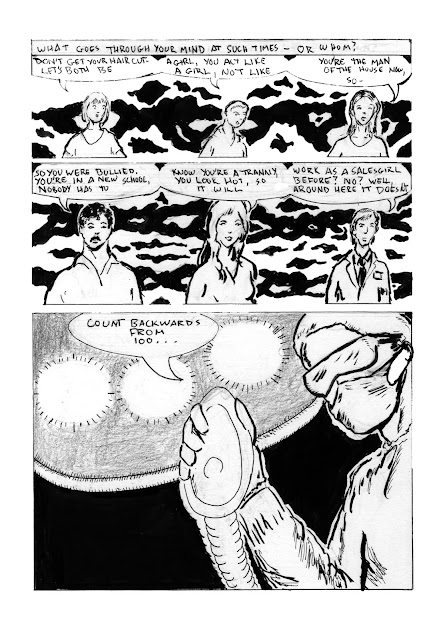 The flowing smoky bits behind the spectral images can be read as many different things: positive shapes, negative shapes, abstract landscape, even cowhide! As long as they convey the overall sense of non-place, I'm content. I'm so tickled by leaving out the borders here and there.

Getting the overhead lights in the operating theater to "read" the way I wanted them to was a bit of a challenge. But once I decided on a neutral value instead of a cluster of smaller lights, I just needed my trusty graphite stick and I was in business.

For some reason, drawing the mask was an irritant! Possibly a psychosomatic reaction to the world of the last 18 months.

Still not quite back to real inks! My studio space is just about the way I want it, but I want a precise, pristine space before I jump into ink again. Amazing how owning your home instead of renting changes your perspective on some things...

I am feeling renewed conviction and confidence in the work. As I noted with joy the evolution of trans communities in recent years, I spent considerable time (probably too much time) pondering whether my story retained any relevance. I finally concluded that this wasn't my decision. I am committing (or trying to) to the mantra of just putting it out there and trusting my readers to see its merits for themselves.