Best. Miniseries. Ever.
This isn't just another Simpsons comic. Those can be fun, even if there's a sameness to them after a while and the art sometimes drifts off-model a bit (I should talk, right?), especially in some of the otherwise delightful Treehouse of Horror annuals. This Jamie Hernandez page is a case in point. 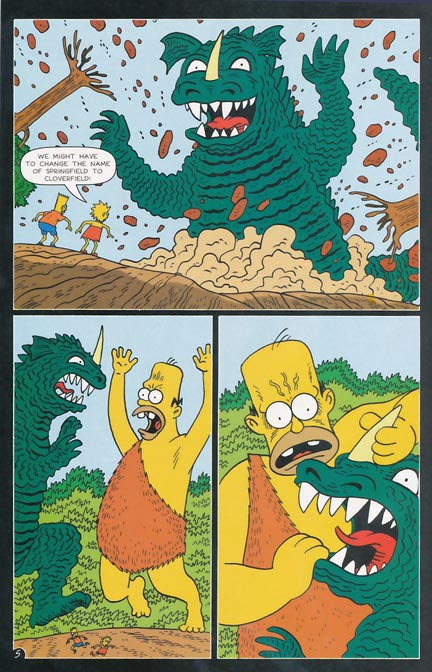 Comic Book Guy, the Comic Book is a miniseries that reflects the love of comics and comic geekdom shown in other Bongo titles, including Simpsons Superhero Spectacular and the brilliant Radioactive Man series. I wish there were a proper affordable TPB of the RM books- it would be a perfect comics history text!
But comic book guy is us. Everyone who's been to more than three comic book stores has met someone, usually a store owner, who shares traits with Comic Book Guy (proper name: Jeffrey "Jeff" Albertson, Master's Degree in Comparative Mythology).

This mini touches all the right buttons. It's like listening to PDQ Bach- it's fun enough in its own right, but the more you know about music, the funnier it is.


So it is with this mini and comic fans.Beginning with Issue one's four alternate covers, all presented on the same issue (thank you! No need to buy multiple copies!), there are in-jokes aplenty.
The covers for issue 1 parody, in order:

Death of Superman (Superman No. 75)

Crisis on Infinite Earths No. 7
Three of the four are death covers, and the Crisis is a Pieta cover. More on Pieta covers another day.
This silly story integrates elements of fandom geekery with self-parody. We laugh at Comic Book Guy's overblown language and his fanatic love of mass market adventure because we see it in ourselves.
And there's a comfort in that.  It's not simply all right that we revere these things, but as The Android's Dungeon decays into shallow, simpering cuteness under Marge's post-mortem management, it becomes clear that the passion for solid story and adventure is what sustains the store, and by extension, the stories and their readers.
While Comic Book Guy is a joke, he's our joke.
It's like Robert McKee explained in his book STORY.
A sympathetic character = likeable.
An empathetic character = like me.
We resonate better with empathetic characters.
There are so many other aspects to this. Subtle and not so subtle jabs at industry trends and societal mores.
When Comic Book Guy passed on, all sarcasm vanished from the Internet, TV and daily conversation. This resulted in the Internet becoming a haven for the free exchange of ideas, causing in turn the government shutdown of the Internet.
A bit of a reach in the real world, but hey, we don't have bright yellow skin, round eyeballs and four fingers either.
The point is that this delightful story reminds us of who we are, and who we can be. Behind all his cynicism, posturing and self-pity, there's something noble about Comic Book Guy- excuse me, Jeff Albertson, M.A.
Fan on, Comic Book Guy!

Tomorrow, we return to Original Art Sundays, after a (embarrassed glance down) three week hiatus!
on January 22, 2011 No comments: