I've been procrastinating this post for a while, but with San Diego ComicCon right around the corner and the 4th of July fading into the past as I prepare for the second wave of summer classes, I don't want it to be too long overdue. And in light of the CBLDF auction scheduled for that huge event, this seems the ideal time to correct the oversight.
Back in May, I volunteered to run the booth so the Comic Book Legal Defense Fund, of which I've been a supporting member for the past decade plus (skipping one year when I was too broke), would have a presence at the MN Comic Book Party, AKA SpringCon.
I'd like to offer a summary of the event.
The first day I was aided by longtime friend and fellow comic book geek Jesse Haller.  Jesse and I have countless discussions on the nature of comics, and endless fun dishing comic book gossip. Jesse was great about creating an effective setup, putting his retail and merchandising experience to work to make the booth shine. He also covered the booth for a couple hours while I had lunch with our mutual friend Frenchy Lunning! 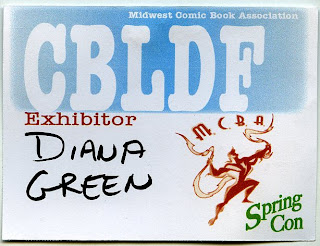 As to the booth itself, it took a while for some of the patrons to figure out what the deal was. But very soon, after the initial burst of people mad to get to the comics (our booth was right by the door!), things settled down and people stopped to talk about the work of CBLDF, and to contribute to the cause.
The degree to which some patrons didn't get it at first was made clear by some folks asking for deals on our books!
Since I wasn't sure of the demographic, I just told the CBLDF people to send stuff they thought apropos. I quickly saw my mistakes. Here's how the event went down:
Day Two saw me aided by Manga fan and aspiring veterinarian Camille McAloney. Her enthusiasm and ability to engage people really helped our sales and communication efforts!
Both days were made for me on a personal level by encountering so many old friends, quite unexpectedly, including one of my favorite former students and the gent who first hired me to teach! Seemed like every time I looked up, there was someone else I knew! That was so positive, just what I needed coming off a rough year.
But it wasn't about me, it was about the cause.
We raised right around $600, give or take, at the table. And SpringCon gives a significant portion of its art auction proceeds to CBDLF as well, so the organization made a decent piece of change for The Cause.
CBLDF has been in existence since the Friendly Frank's bust in the early 1980s led to Greg Ketter and Dreamhaven throwing The Irish Wake for the First Amendment, an event which I was privileged to attend. This was a direct precursor to the CBLDF. Among hundreds of subsequent cases, they defended a comic book store owner who was arrested for selling  an adults only comic book to an adult.
The mind boggles.
While the problem has diminished a bit, there remains a huge need to protect the rights of comic book creators, publishers and retailers from people who engage in censorship, which is, in the words of Mark Twain, "telling a man he can't have a steak just because a baby can't chew it."
And just for fun, here's a SpringCon attendee in the role of a Wally Wood EC Comics spaceman! 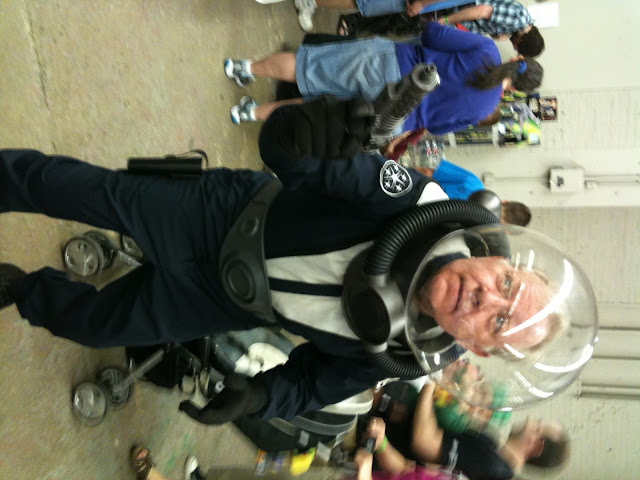