The comics world is full of people who call themselves artists, for better or for worse.
The larger art world has a similar circumstance.
Few cross the arbitrary boundaries of the two worlds.
Jeffrey Catherine Jones was one of those few. 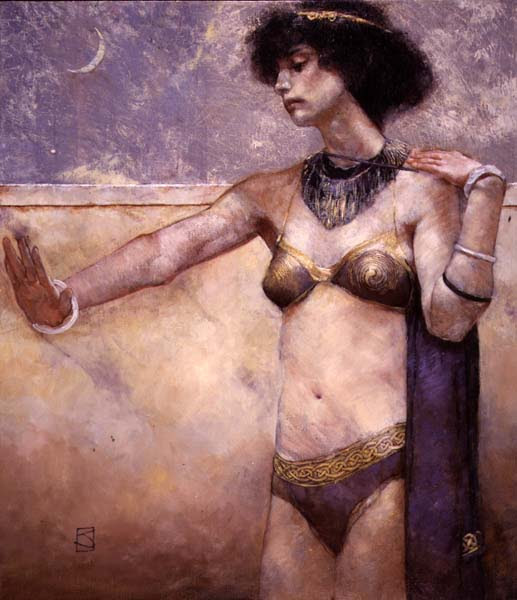 Beginning her comics career with some one-off stories for Charlton and some work in the undergrounds, notably on her stunning solo book Spasm!,  Jeffrey's work first gleaned national recognition through the pages of the National Lampoon.

Her strip IDYL, stunning in its clarity, was a series of sardonic and melancholy short moral tales, often strangely out of place among the strip's peers, but always welcome and eagerly devoured by the readers. During this time, Jones also took up with Bernie Wrightson, Micheal Kaluta and Barry Windsor-Smith in the short-lived adventure known as The Studio. Wrightson spoke to me concerning The Studio at San Diego a couple years ago. To paraphrase from my spotty memory, "It was this huge, rat-infested space with great light. We only worked there together a short time (he specified the time frame, but I don't recall specifics- it may have been less than two months) until the whole thing caved in. But we produced some incredible work." Shortly thereafter, Jones shared an upstate New York home with Vaughn Bode', a colleague from the undergrounds, another collaborator with Wrightson (on the Purple Pictography strips for Swank), and another artist with transgender leanings. Bode' and Jones were fast friends by all accounts, and some of their adventures living together are documented in the Comics Journal special issue on sex. The article is reprinted at this link, on the website of Vaughn's son Mark Bode'.
Vaughn's strip Jones Goes to Bones is a loving jab at Jeffrey's perspective that her art would make her immortal. I'll add the strip to this post as soon as I can get a decent scan of it.
I have no direct knowledge of the problems Jeffrey faced in the subesquent years. She finally had her sex-reassignment surgery fairly late in life.
She had personal problems following her surgery, but based on secondhand reports from mutual friends in the comics community, these were problems she had experienced prior to surgery as well. Her bouts with mental illness have been documented, by her, on her website. She appeared to be in recovery in the final years of her life.
I wrote her in the early 1990s as part of my research for my book on GLBT comics.We struck up a brief correspondence thereafter, truncated by her aforementioned illness.
Her reply to my specific query about her sexual identity, which I promised to use verbatim:
"That I am a transsexual is a matter of public record. But I am a woman first and an artist second and wish to be seen on those terms. I find no others acceptable."
I reconnected with her via Facebook, as did so many others. I suspect she was surprised to find out just how large a following her work had.
In the spate of obituaries I've seen today, there is a bit of well-intentioned stumbling over pronouns. My response is direct. She chose the terms of her life. Respect them in her death.
Finally, here's a video obituary that includes the trailer for a recently funded documentary on the life of Jeffrey Catherine Jones. Like Roy Orbison, she was lucky enough to live to see a renewed interest in her work.