So Marvel made the list twice this year. Good for them.
Smart writing, clean art and good storytelling.
Glad they're finally getting back to that. 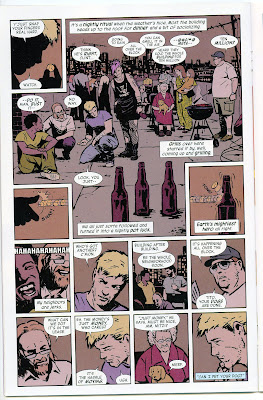 Matt Fraction's Hawkeye brings many things to mind. The most immediate is Eisner's City People and Invisible People, works that peer in the windows of the cliched everyman.
But where Eisner is drawing on the classic model of Jewish tragedy in most of his city narratives, Fraction is channeling the wry wit of American Flagg era Chaykin and tempering it with a healthy dose of old school Frank Capra. It also brings to mind William Messner-Loebs' short-lived series Bliss Alley.
This book depicts Hawkeye as an Avenger who lives in the old neighborhood and cares directly about others who share the place.
While he has the unorthodox option of attempting to solve one of the problems by buying the building in question, Clint addresses the issues fairly head on.
The wit comes in an unusually blunt empathy. Fraction uses captions and parenthetical translations as a vehicle for humor and understanding. As an example, when Clint is released from the hospital early in issue 1, there's a word balloon going out of panel that reads "(some Spanish sounding stuff". The following panel has a character saying "Back off (Russian maybe), I keel you, okay bro?" We read it as Clint hears and sees it.
David Aja's art and Matt Hollingsworth's colors are remarkably effective together. Clean subdued palettes that reinforce sparse, accurate rendering. Can't ask for much better. 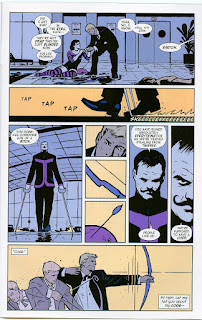 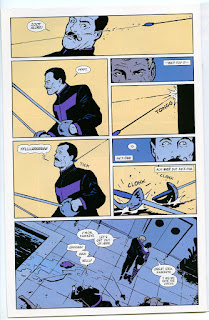 This two page sequence from issue 2 references Clint's past as a criminal and his time in the circus, also showing his protege/partner Kate Bishop.
There's so much to like about this book. Every part of it works. The design elements are obvious without being intrusive, and contribute to the story. The narrative and action build seamlessly. Character dominates throughout. It's an easy read, but not dumbed down. It references the central character's unnecessarily elaborate back story without confusing matters.
It's clean, sharp, and stand up to repeated readings. Volume 1 of the trades, My Life As A Weapon, is out as of March, and well worth the pittance requested for it (lists at $16.99, Amazon for $6.99).
Some vile souls have posted torrents of it. Do as your conscience and pocketbook demand, but the usual mantra applies: support creators and publishers whenever possible. At #3,408 on Amazon's list, it's doing OK, but hey, more sales means more work for the creators, at least ideally. 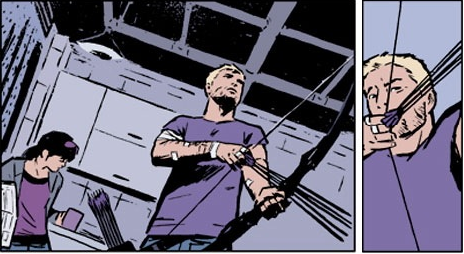 I've railed against the evils of snark in the past. This book could easily be misread as snide.
But another phrase sums it up nicely.
Joie de vivre.
Reading this , I get the sense that, as hard as they must work to create such a seemingly seamless project, the creative team on Hawkeye are always having the time of their lives.
As are the characters. 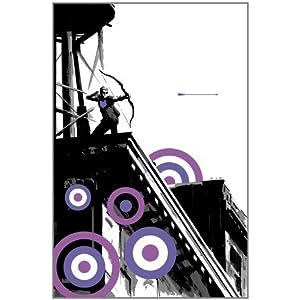